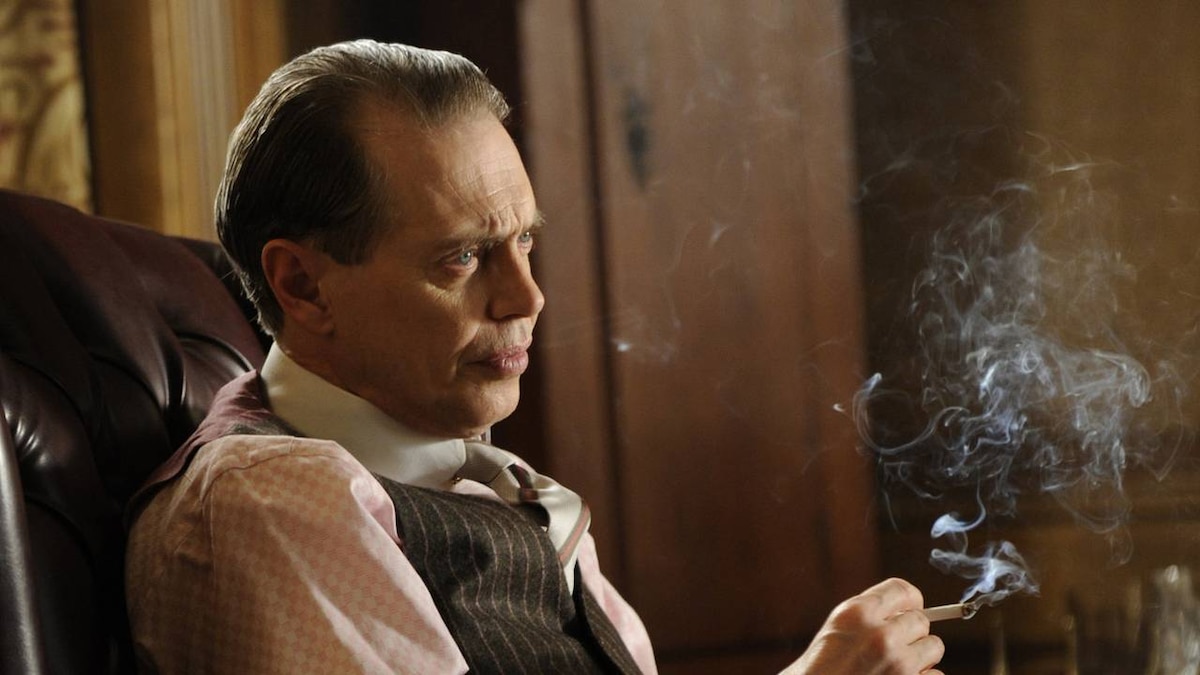 Recuperating at home, Eli scans the mug shots of the 'DAlessio brothers that Halloran has brought him and Ward Boss O'Neill to look at. In private with his brother, Nucky also expresses concern about what's being reported in the papers -- they're alleging corruption in the sheriff's office -- bad news during the election season.

Nan Britton tells Margaret that she fell in love with Warren Harding at first sight. "But America needs him and so I have to sacrifice," Nan says wistfully. When the two stop in at the Belle Femme dress shop, Madame Jeunet appeals to Margaret to approach Nucky on her behalf, since she can't afford the increase in payoff money that Nucky is demanding. Although Margaret protests that she can't intervene, Jeunet reminds her, "You have power you do not suspect."

Not having received Jimmy's telegram with his arrival information, Nucky is surprised by his appearance in his office. Before officially accepting Nucky's offer, Jimmy gives two more conditions: his conversations with Nucky remain private, and Harrow joins him. Nucky agrees and instructs Jimmy to take care of the 'DAlessios. Jimmy presses Nucky to state his murderous intentions out loud, but Nucky avoids the actual words. "Politician to the last, eh?" notes Jimmy.

Rothstein, Lucky and Lansky welcome Mickey Doyle and two of the 'DAlessio brothers to New York. Rothstein proposes they import the best liquor from Europe and charge a premium price, but because the alcohol will come in through the port of Atlantic City, Nucky will need to go. To complete the deal, Rothstein has Doyle and the 'DAlessios sign large life insurance policies he's taken out on them to assure they won't chisel him.

Margaret puts her kids to bed and broaches the topic of Madame Jeunet's financial woes with Nucky, trying to reason with him. Nucky resists her arguments and tells her the topic is unsuitable for discussion before leaving in a huff.

Robert Dittrich assesses Angela's paintings and compares her work to Mary Cassatt, raising Angela's hopes that his art dealer friend will give her a professional evaluation. When Mary opens a bottle of wine, she exchanges a kiss with Angela, and then Robert tries to draw Angela in, explaining, "Everyone in Paris is doing it." The moment is interrupted by Jimmy's sudden return; Mary and Robert leave. Angela is surprised to find Jimmy back - she never received a telegram either. Although she tries to resist, Angela eventually succumbs to Jimmy's sexual advances.

Van Alden receives a call from Western Union - Eddie inquired about the missing telegram, but Jimmy's cables were all passed on to Agent Sebso. Confronting his deputy, Van Alden questions his loyalty and competence. Sebso explains he was trying to protect their careers: the Supervisor already thinks they're obsessed with the Schroeder murder.

At breakfast with his family, Jimmy catches Angela off guard by asking for another baby. When he gets a call from his mother, he heads over to see her. Lucky Luciano luxuriates in bed while Gillian goes to fix coffee, but he's stunned when it's delivered by Jimmy. Lucky, led off by Jimmy at gun point, tries to bargain: He'll call off the 'DAlessios and cut Nucky in on the deal with Rothstein. Van Alden traps Jimmy in the hallway and arrests him, cutting Lucky loose.

With Mayor Bacharach unhappy about the opposition's campaigning, Nucky instructs Halloran to fine shops that are displaying posters for Fletcher. Halloran convinces Nucky to appoint him acting sheriff, and drops hints that he's ready to take the spot permanently now that Eli's reputation has been tarnished.

Van Alden interrogates Jimmy about his whereabouts during the heist - but seems more interested in Margaret's relationship with Nucky. Jimmy insists that he was at the movies, and knows nothing about Hans Schroeder's death. His confidence flags when Sebso leads him to a cell and he encounters Billy Winslow.

In bed with Margaret, Nucky discusses the upcoming election. He praises the way she held her own against Edge at his birthday party and asks her to help the Republicans get the women's vote. Margaret seizes her chance and brings up Madame Jeunet again, this time passing off her concern as vanity: "She knows how to make me look pretty." Nucky acquiesces.

Nucky visits Jimmy in jail and gives Sebso a friendly pat on the shoulder. Jimmy reveals that the 'DAlessios are backed by Rothstein and Lucky, and gets bad news from Nucky in return -- there is no bail for five counts of murder. Desperate, Jimmy suggests turning to his father, an idea that surprises Nucky. He tells Jimmy that the legal system is not his ticket to freedom.

Van Alden impresses Supervisor Elliot with news of Darmody's arrest. Sebso apologizes again for the telegram mix-up and advises Van Alden to move Winslow to Manhattan to keep him safe from Nucky.

Nucky calls on the Commodore, who is still ailing. The Commodore is full of complaints: his health, his sick dog, the six years he spent in jail instead of Nucky. When Nucky informs him that Bacharach is a weak candidate, the Commodore advises Nucky to replace him -- and Eli too -- to give people the change they want.

Nan shops at Belle Femme in search for a dress for the Inaugural, but Margaret advises her to find something more practical. Both take notice of a $480 dress that has recently come in. Madame Jeunet thanks and flatters Margaret for interceding with Nucky, but Margaret reminds her of her initial unkindness towards her when she first began working in the shop. To rectify things, Jeunet offers her a frock for Emily, and then a brush, but Margaret coolly informs her Emily didn't speak to Nucky -- she did. When Nan steps out of the dressing room in the $480 gown, Margaret expresses her pointed admiration for the dress.

Sebso drives Billy up to New York. Pulling over to relieve himself, he explains to a confused Billy why his death will take place: Billy was killed while trying to escape. Sebso then shoots Billy, and bashes his own head with a rock.

Angela goes to see the Dittrichs in their studio and is told by Robert that his gallery owner friend will be staying in Paris and is not interested in her work. Robert subtly lets her know that Jimmy's return has changed her situation.

Margaret, wearing the new gown, dines with Nucky and the Baders at Babette's. Nucky offers Edward Bader the mayor's position, reminding him that the opportunity can only benefit Bader's construction business. Nucky and Margaret stroll along the Boardwalk after supper when Lucien 'DAlessio approaches for a handshake. Eddie spots Sixtus in time to knock a gun out of his hand, saving Nucky, but not before a stray bullet hits a woman in the crowd. The woman falls and bleeds all over Margaret's new dress.