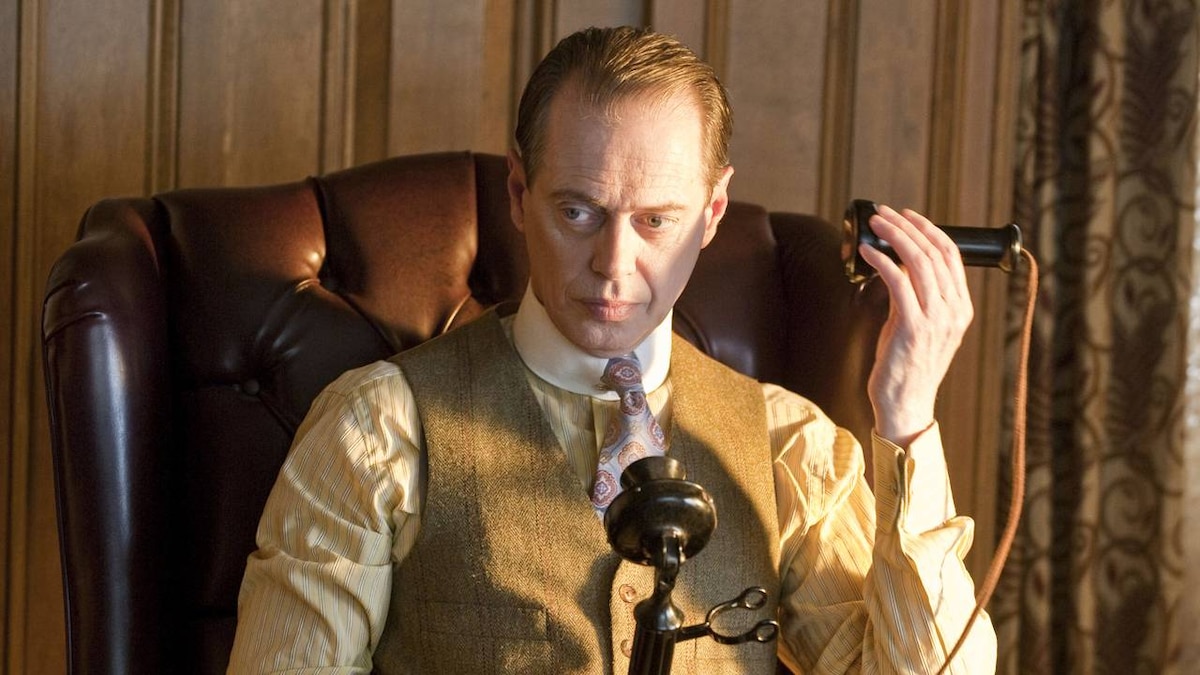 Nucky, Margaret, Annabelle and Harry watch while Houdini's brother Hardeen wiggles out of his restraints. Margaret is genuinely captivated by the escape act, but Nucky is bored. Harry sweats visibly.

At home with Angela, Jimmy remarks on how distracted she is. When the phone rings, Jimmy asks the caller: "What am I supposed to do about it?" He tells Angela it was Gillian: His father is dying.

Hardeen continues to entertain the ward bosses and their wives in Nucky's suite. When he transports Margaret's peridot bracelet onto Annabelle's arm, the magician explains that duplicity is most successful when people want to be deceived. Harry announces to all that he has been ruined by Charles Ponzi, causing Annabelle to storm out.

The Commodore lays in bed beside his deceased dog. Visiting his dying father at his mother's behest, Jimmy has a bite of a biscuit. The meeting is tense: Jimmy is annoyed with the amount of grief his father is expressing for the dead dog and criticizes him for pursuing Gillian when he was 54 and she was just 13. When Jimmy accuses the Commodore of not knowing him at all, his father counters: "I know you backwards and forwards. You want everything you can lay your hands on." He gives Jimmy a lesson in Atlantic City history and then states that the wrong man is running the city. Jimmy excuses himself and vomits in the bathroom.

Rothstein checks in with his attorney Bill Fallon about the White Sox scandal. Fallon suggests that Rothstein face things head on and testify before the grand jury in Chicago -- but consider first who he can call in for a favor.

Angela and Mary make plans to sail to Paris with Tommy. Robert hops in on his crutches, still recovering from Jimmy's thrashing. After Angela leaves, he asks Mary what they were conspiring about.

Sebso calls Nucky from the lobby of the Ritz to share his concerns about Van Alden's unwavering suspicion. To help, Nucky gives him a tip about an illegal distillery outside of town.

Annabelle goes to Nucky for money -- Harry has run off with the $3600 she had saved.

Aware of how Annabelle accumulated her stash, Nucky is less than sympathetic and offers her $300. The two share a memory of earlier times together and Margaret walks in to hear Annabelle's proposition. She brusquely informs Nucky she already gave Annabelle $50, and that the League of Women Voters has endorsed Bader.

Jimmy reports back to his mother about his visit to the Commodore, expressing surprise at their apparent friendship. She explains they got back in touch when Jimmy enlisted. Jimmy brings up the age difference between his parents and that she had to raise him alone. Gillian assures him Nucky looked after them as it was Nucky who procured her for the Commodore. Jimmy dismisses Nucky as a pimp, but Gillian has fonder memories of Nucky as a young man, married and ambitious.

Van Alden and Sebso drive through the woods looking for the distillery and stumble upon congregants witnessing a baptism. Exchanging greetings with the deacon in charge, Van Alden is impressed by his religious conviction. Turning his attention to Sebso, Van Alden tells his deputy that as a Jew, he is doomed to damnation. The two leave as the baptisms begin.

Gillian is joined by the doctor at the Commodore's. Inquiring as to his condition and symptoms, the doctor asks to run some tests. Jimmy surprises Gillian with his arrival and offers to spend the night so she can get some rest.

Still smarting from the day's events, Margaret is unhappy about attending a Daughters of the American Revolution dinner with Nucky. Nucky suggests she stay behind, but Margaret retorts, "I'll do what's required of me." As they argue, Margaret remarks that she's sick of their whole "arrangement"; Nucky goes to the bathroom and reveals that he knows she's been using Lysol to prevent pregnancy. As the fight escalates, Margaret tells Nucky she knows he made her a widow. Nucky smashes the Lysol, "You won't be needing that anymore," and storms out.

Harrow checks in with Jimmy at the Commodore's house. He updates him about the 'DAlessio clan, and offers to murder their extended family to draw them out. Harrow leaves so Jimmy can talk to the doctor -- who brings news that the Commodore is being poisoned with arsenic.

Angela packs up her things and tries to convince Tommy the trip will be fun, even if Jimmy and Gillian aren't coming. She leaves a letter on the bed for Jimmy.

Nucky confers with Eli about his fight with Margaret. Nucky admits that he didn't deny Margaret's accusation about Hans' murder, setting off Eli. Eli argues that Margaret is now a liability, and that like everyone else in town, "the Irish chippy" only cares about what Nucky can give her. Enraged, Nucky mentions Hardeen to Eli – if he weren't Houdini's brother, "nobody would give a f*ck."

Jimmy visits his mother and quizzes her about the Commodore -- how much money he has and who would inherit. Jimmy explains that eating the biscuit the other day made him sick … and then pulls out a can of arsenic which he found in the house.

When Nucky meets with his ward bosses, his mood is still sour. He criticizes one for a mistake, "lack of attention to details is what's killing us." He then surprises everyone, including Halloran, by letting them know that Eli has resigned and Halloran will run for sheriff on Election Day.

Harrow calls Nucky with news: Margaret and her family have left the apartment. Nucky arrives to find the space empty, and Margaret has left her bracelet behind.

Angela and Tommy arrive at the Dittrichs' to find it already vacated. The landlord, who has been stiffed his rent, has no information about their whereabouts, but remembers Mary always spoke of Paris.

Sebso tells Van Alden he has requested a transfer to the Detroit office and tries to bury the hatchet with him. Van Alden remains unconvinced, insisting "temptation knows no rank," and remarks on Sebso's expensive new shoes. Sebso promises to do whatever it takes to convince Van Alden of his integrity. The two return back to the baptisms by the river, and Van Alden offers him up to the deacon. Alarmed, Sebso initially refuses to go into the water but finally does so. Van Alden dunks Sebso repeatedly, ultimately drowning him. Brandishing his gun and badge, he leaves the body behind with the stunned congregation.

Angela returns to her apartment with Tommy. Her letter is gone, but Jimmy is there. Jimmy embraces Tommy but says nothing to Angela.

Nucky walks the boardwalk and enters the palm reader's storefront.