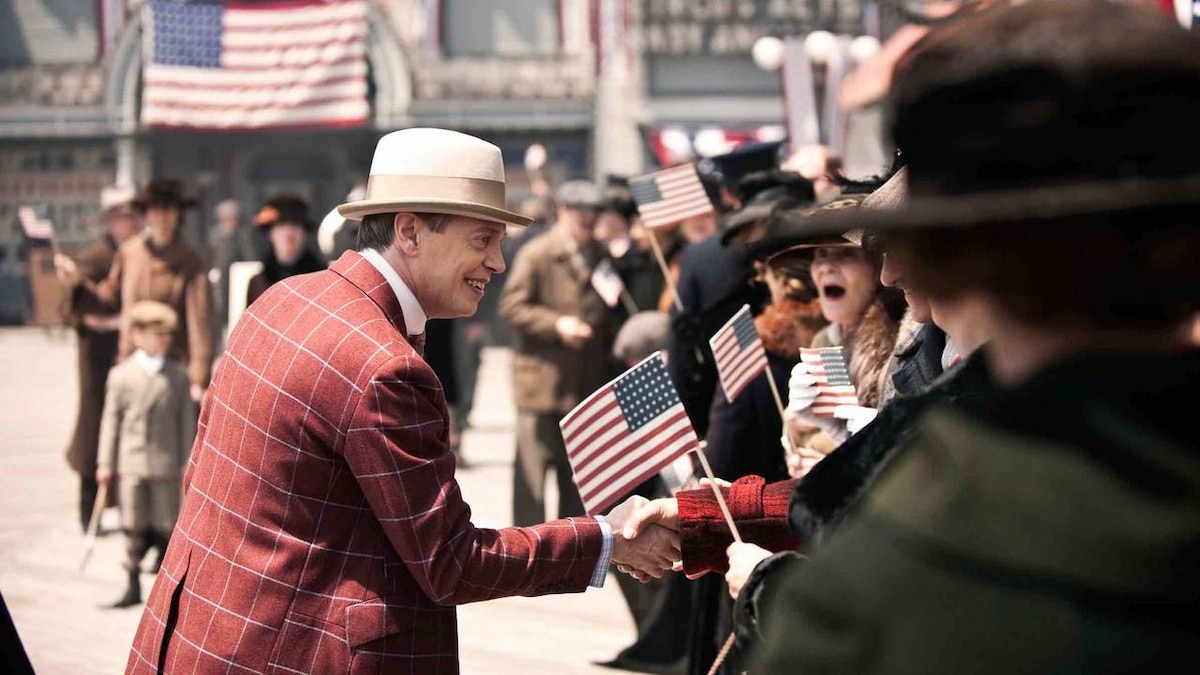 A Return to Normalcy

Agent Van Alden addresses a room full of prohibition agents and warns them that whoever replaces him in Atlantic City will be "bribed, coerced and tempted on a daily basis." When one agent jokes that they should bring on the dancing girls, Van Alden slaps him, claiming that Sebso died in the line of duty (from a heart attack); the humor is inappropriate. Van Alden refuses Supervisor Elliot's suggestion he reconsider his resignation.

With Fletcher leading the race for mayor and accusations of corruption filling the papers, Nucky meets with his ward bosses to strategize about the upcoming elections. The men assure him they will get the women, men and even the dead out voting. Chalky informs Nucky that Fletcher approached him to rally the black votes, but he'll stick with Nucky in exchange for a new car, $10,000 … and an invitation to the victory party.

Margaret entertains her kids and Nan Britton at Nan's cottage. Nan reminds her that once Harding wins the election, she'll be off to D.C. and asks Margaret what her own plans will be. Margaret, in the middle of baking a barmbrack cake with a ring, a coin and a rag inside, says she'll let the brack decide. Each object symbolizes the future: a wedding, wealth or poverty.

Sheriff Halloran and the doctor confront Louanne with the evidence of the Commodore's poisoning while Nucky, Jimmy, Gillian and the Commodore look on. Louanne initially attributes the toxin to an accidental mix-up and then admits, "If I used a shotgun, I'da had to clean the mess up myself." Nucky intervenes before she can be arrested – sympathetic, he hands her a wad of bills and instructs her to leave Atlantic City and change her name. Louanne gives Nucky her Bible in thanks and leaves, while the Commodore rages at Nucky for his gesture.

Rothstein packs up for Chicago and tells Lansky and Lucky that he has booked passage for Scotland should he be indicted. Lucky and Lansky urge him to reach out to Torrio for a connection to Nucky, the only man with enough political clout to help Rothstein dodge an indictment.

Angela lets Jimmy know that Tommy is afraid of him – not for the beating on the Boardwalk – but because he's heard Jimmy scream out at night when he's having nightmares. "I'm afraid you're going to hurt us," she admits. Moved, Jimmy quits giving her the cold shoulder and admits that the war changed him, and he used to dream of the feel of her hair against his face while he was in the trenches. When he asks Angela if she was in love with Mary, she replies, "I was lonely." The two agree to try and make a fresh start.

Margaret and the children walk through a church graveyard with Nan and the baby for an All Hallows Eve service. Spotting a headstone for Enoch Thompson Jr. and Mabel Thompson, Margaret stops short.

Torrio arranges a meeting with Nucky but won't reveal any details about the business he wants to discuss. Dressing for a Halloween dinner party, Nucky puts on a mask just as Margaret walks in. Margaret describes him as a dapper villain; Nucky counters that her disguises include devoted wife and crusading suffragette. She brings up his lost baby and tells him she's not there to play games, but rather to learn who Enoch Thompson really is. Nucky lets it all out: His son was born seven years ago when he was just elected treasurer. Busy with work and terrified by the fragile newborn, he neglected his wife and child. Returning home one night, he realized the baby was dead, but his wife was caring for him all the same. His wife committed suicide weeks after the burial. Touched by the story, Margaret asks how is it then that Nucky does what he does. "We all have to decide for ourselves how much sin we can live with," he replies.

Van Alden tells Rose he feels unfulfilled at work and has resigned his position. They will be moving to Schenectady where he will work with his uncle in his feed business. When Rose protests, he declares it will take a sign from God to change his mind.

Angela receives a postcard from Paris: "Forgive me, but don't forget me."

Nucky feels ambushed by Torrio when he realizes his meeting is with Rothstein. Torrio advises Nucky to let go of the past and hear Rothstein out. Despite Jimmy's misgivings, Nucky agrees to have the White Sox indictment quashed in exchange for a million dollars in cash and the location of the remaining 'DAlessio brothers. Nucky instructs Eddie to call an emergency press conference.

With all the media gathered, Nucky announces that the men behind the massacre in the woods have been identified – Hans Schroeder, abetted by the 'DAlessios. As Nucky speaks, Harrow, Jimmy and Capone track down and kill the remaining brothers.

The following morning, Election Day, Nucky strolls the Boardwalk, and is hailed as a hero by all. He exchanges a look with Margaret, who is on line with Nan, but the two say nothing to each other.

Jimmy returns home to find that Angela has cut her hair short.

Nucky and his men celebrate the returns that night. Eddie whispers to Nucky that Rothstein has escaped indictment. Although Eli is still smarting about being passed over, Nucky assures his brother that blood is thicker than water. "Why'd it have to be my blood?" retorts Eli.

When news of Bader's win is announced, the new mayor replaces Halloran with Eli as sheriff, to the surprise of both men. Drunk, Jimmy mouths off to Nucky, "You'll use anybody. Man, woman, 13-year-old girl." Jimmy tells Nucky he knows now that it was just guilt that propelled Nucky to look out for him, not love. "Stop acting like you give a sh*t," advises Jimmy.

Margaret, Nan and the children enjoy the barmbrack cake. Nan is overjoyed to find the ring in her slice, and does not answer Margaret when she questions whether Harding will really send for her. Margaret finds the rag in her slice, and dismisses its meaning to her children as a silly superstition.

Van Alden packs up his office only to be surprised by Lucy. She announces that he made her pregnant.

Jimmy meets with the Commodore and finds his mother fussing over him. The Commodore rails on about Nucky: He not only let Louanne go, he's the reason he went to prison. The two were caught election-rigging, but only one would take a fall, in an arrangement made with Woodrow Wilson. The Commodore spent five years in jail, only to find Nucky in control of the city when he returned. Jimmy and the Commodore agree that Nucky is a master of manipulation: He makes you think you've got a good deal so you'll do his bidding. The Commodore enlists Jimmy to help him -- and Eli -- take back the city.

At Babette's, Nucky spots Annabelle with her newest sugar daddy -- Baxter, the cutlery salesman. Nucky also sees Margaret and the two end up toasting with champagne. Margaret tells him that the children miss their "Uncle Nucky." The news comes over the radio that Harding has won the election and has called for healing and a "return to normalcy." As Eddie Cantor sings, Chalky sits with his date at the bar.

Jimmy, Eli and the Commodore plan their next moves as Gillian watches over them. Nucky's men count Rothstein's delivery of cash. Later that evening, Jimmy walks along the beach while Nucky and Margaret stroll the Boardwalk.