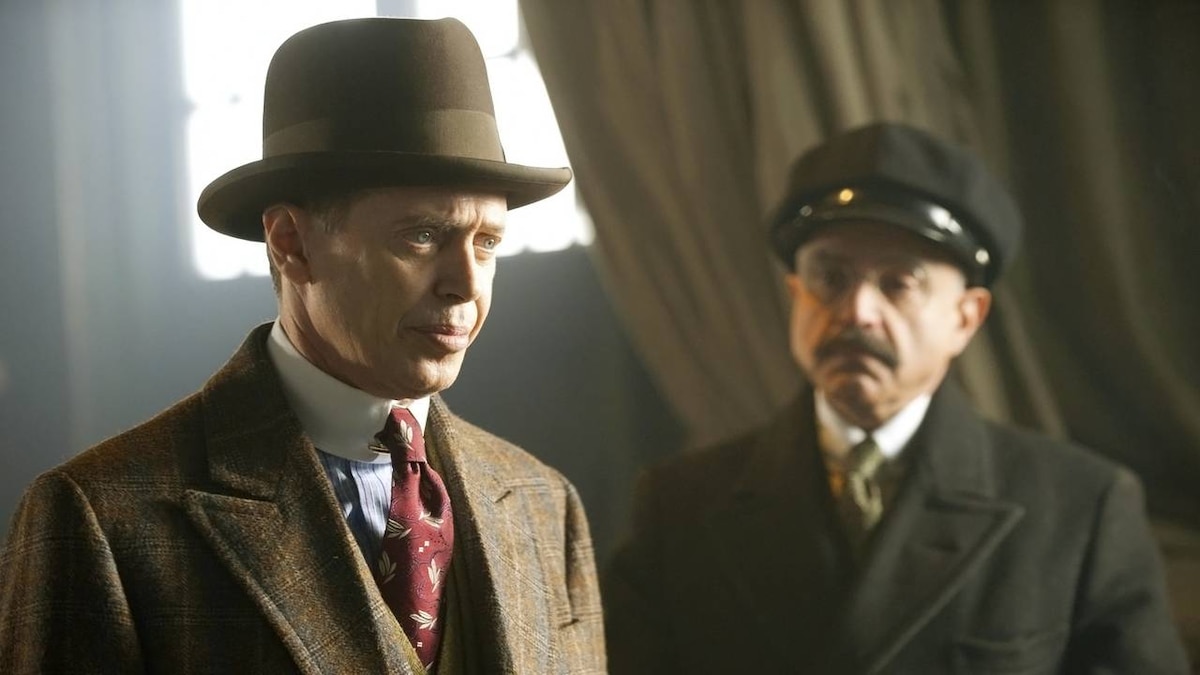 Simon, the survivor of the shooting, is rushed to a hospital in Pennsylvania, barely alive. Annoyed that Jimmy left a witness, Nucky instructs his brother to help "nature take its course." Eli tries to smother Simon under the guise of interrogating him behind a screen, but is interrupted by the arrival of Agent Van Alden.

Delivering a shipment of whiskey to Chalky White so he can work his magic and turn 500 bottles into 3000, Nucky is confounded by Chalky's use of the term "motherf**ker." The two haggle over Chalky's split, finally settling on 35% for Chalky.

Margaret weighs her options with her neighbor Edith about how to support her family. When her daughter asks about the miscarried baby, Margaret tells Emily the stork must have gotten lost. Ward Boss Neary surprises everyone when he comes knocking with a job offer for Margaret at Belle Femme in the Ritz.

Although Van Alden claims he has jurisdiction over the case, Eli prevents him from asking Simon any questions. At a doctor's office in New York, Lucky Luciano gets treated for gonorrhea. When the doctor makes a note on his chart about Lucky's inability to maintain an erection, Luciano loses his temper and tears out the record.

Nucky's girlfriend, Lucy, offers to bear him a child, but Nucky stalls. Elsewhere in the hotel, Margaret reports to work at the Belle Femme dress shop. She learns from a disdainful Madame Jeunet that her predecessor was let go at Nucky's request so that Margaret could have the job.

Van Alden arrives back at the hospital waving a "writ of certiorari" giving him jurisdiction over the surviving witness. He and Agent Sebso leave with Simon before Deputy Halloran can do anything to stop them. Van Alden and Sebso drive away with the intention of delivering Simon to New York where they can get a statement.

Jimmy plays with Tommy on the Boardwalk and is surprised when his son heads directly for the Dittrich photo studio. Inside, he sees how at home Tommy is in the place and with its proprietors, Robert and Mary Dittrich.

Still hours from New York, Van Alden and Sebso stop at a dentist's office to try and keep Simon alive. The dentist administers cocaine which revives Simon enough to curse at Van Alden in Yiddish. Van Alden retaliates by squeezing Simons' open wound and demanding information, and eventually, Simon reveals he heard one of the masked gun men call another one "Jimmy." By the time Eli's men arrive to reclaim him, it's too late -- Simon is dead.

Aware of Jimmy's involvement in the shooting, Rothstein instructs Lucky to kill him.

Gillian has her fortune read: There's a dark man in her future. When Nucky arrives to meet with her, she reminds him of a promise he once made to keep Jimmy out of trouble. "I'm not God," he informs her. "Now you tell me," she replies.

Mickey Doyle convenes with the 'DAlessio brothers, who have bailed him out of jail and want repayment of their loan.

Going through a photo album at home, Jimmy notices Angela's gaze and bare-shouldered pose in one of the pictures - and that the photographer was Robert Dittrich.

Margaret waits on Lucy at Belle Femme. Lucy is more than comfortable flaunting her superior position as she tries on lingerie: "He's a soft touch for the charity cases," she says about Nucky.

Van Alden calls Supervisor Elliot with an update: James Darmody was involved in the shooting. Elliot compliments him on his good work and orders him to go home and see his wife while Elliot consults with the U.S. Attorney about next steps.

Eli and Nucky break the news to Jimmy: He was fingered by Simon and now the Feds are after him. Nucky expresses his disappointment in the way things have turned out for Jimmy. "I used to think you'd own the world one day," he tells him, before instructing him to leave Atlantic City.

Jimmy and Angela fight as Jimmy packs his things to leave. When Angela presses Jimmy for details about where he'll go, he accuses her of sleeping with Dittrich. Angela tries to defend herself - she and Jimmy barely knew each other when he left for the war, and she had no knowledge if he was even alive.

Searching for his driver, Kendall, Chalky sees that he has been strung up and hanged. "Liquor kills" is scratched into the door of his car. Nucky and Eli pay their respects to Chalky and ask him to keep news of the hanging quiet: It's an election year so "the last thing we need is a race war." Nucky and Eli offer up a story that Kendall was shot by a cuckolded husband and Eli shoots his corpse so the tale will hold up. In return, Chalky demands a 50% share of the bootlegging take.

As rain pours down over Atlantic City, Angela drags out the dying Christmas tree and cleans up the needles with the vacuum. Nucky notices he has tracked muddy prints into the lobby of the Ritz. Jimmy rides the train to Chicago.