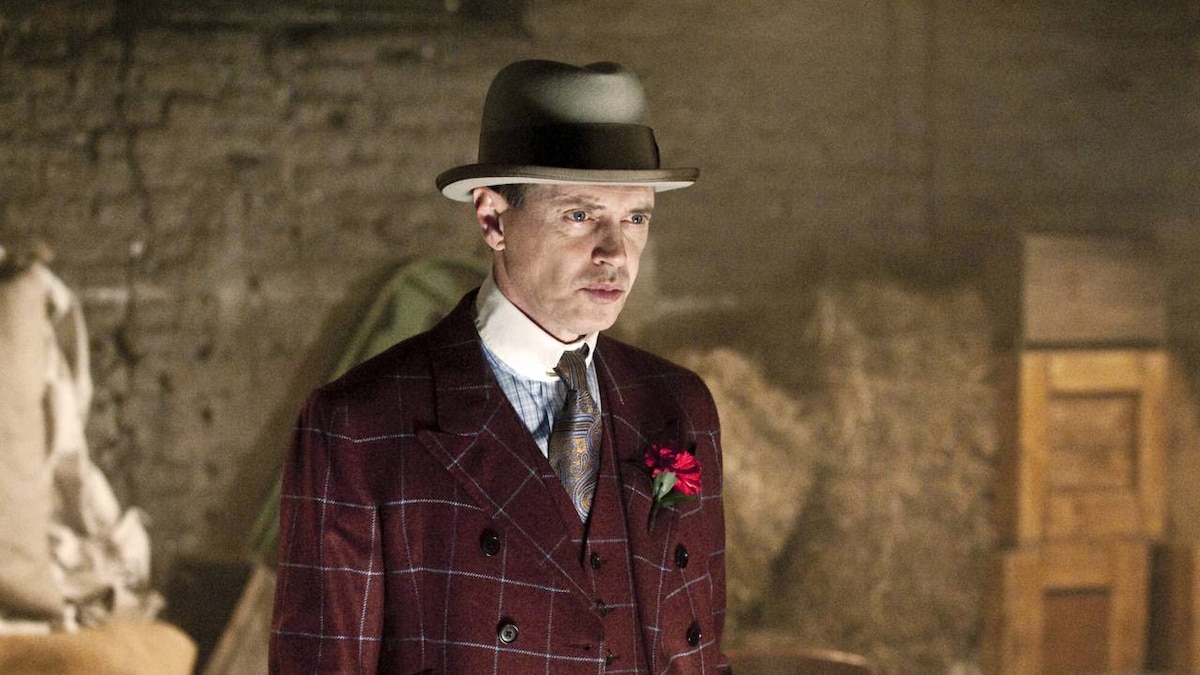 Richard Harrow dreams of walking on the beach with Odette, the whore from the Four Deuces -- but wakes up in the Schroeder home to find a horrified Emily screaming at his unmasked face, rattling a household already on edge. Margaret tries to soothe her frightened daughter.

Sebso recounts the series of events that led to Billy Winslow's death: Sebso uncuffed him so that Winslow could urinate. Supervisor Elliot is sympathetic and exonerates Sebso. He directs his wrath at Van Alden for botching the case and gives him a final warning.

Jimmy surprises Angela by expressing an appreciation for her art: "Two weeks in the trenches and you forget there's anything beautiful in the civilized world." He helps her mix some paints and the two share an intimate moment.

Margaret and Nucky discuss the possibility of the 19th Amendment being ratified by Tennessee, granting women the right to vote. Margaret also broaches the subject of Harrow: He scares the children. Nucky insists that Harrow is necessary to provide protection and rejects Margaret's suggestion that she and the children go away for a while.

Rothstein meets with the 'DAlessio brothers and Doyle and berates them for bungling Nucky's assassination. When the brothers ask how they can make it up to him, Rothstein tells them that "Nothing says I'm sorry like money."

In Chicago, Torrio sits down with Jake Guzik about expanding into new territory. Capone, who has already tried Torrio's patience, offers his boss a novelty cigarette that explodes in his face. Furious, Torrio chews Capone out for his immaturity, then makes plans to reconvene with Guzik at his son's bar mitzvah.

Nucky tells Jimmy to instruct Harrow to keep his mask on in the house so as not to scare the children. The two are caught off guard by a visit from Mickey Doyle who apologizes to Nucky and explains his connection to the 'DAlessios - and that he had no knowledge of the attempted shooting. Crossing sides, Doyle reveals that the brothers were behind the lynching of Chalky's driver, the assault on O'Neill and the casino heist. Furthermore, it was Lansky who approached Chalky. Nucky decides that Chalky should lure Lansky in, just as Eddie interrupts with news that the amendment was ratified.

Harrow comes upon Margaret reading 'The Wizard of Oz' to her children. He turns to leave but she invites him to stay, and he listens as she reads a passage and shows an illustration of the Tin Woodsman. "That's me," he notes, tapping his mask, instantly winning over the children.

Margaret indulges in champagne with Nucky to celebrate women winning the right to vote. Nucky pitches the Republican ticket to her and asks her to speak on behalf of Bader for mayor at the League of Women's Voter meeting. Unsure, Margaret grills Nucky about Bader's qualifications, and is not entirely satisfied with his answer that though Bader is seemingly unqualified, Nucky will be the guiding hand of government.

Tommy Darmody runs ahead to the Dittrich Photo Studio while walking on the Boardwalk with his parents. Spotting a photo of the Dittrichs, he points and says it's "Mommy's kissing friend." Jimmy tears into the studio and beats up Robert Dittrich, first inside, and then outside of the building while everyone looks on in horror.

Van Alden pays a visit to Margaret and takes notice of her improved surroundings. He shows her a photo of her 16-year-old self and describes her as a girl filled with hope and yearning, then criticizes her for consorting with Nucky, the man responsible for Hans' death. "I see into your soul, Margaret. At night when I look at this picture," he explains. Startled, Margaret orders him to leave and to surrender the photo. Van Alden leaves - with her picture - and warns her of the fires of hell that await.

In attendance at the Guzik boy's bar mitzvah, Capone strikes up a conversation with a fellow attendee who explains the Jewish philosophy of transitioning into manhood. The man points out that Capone should switch to a yarmulke rather than "the cap of a boy".

Nucky briefs Chalky on their plan for Lansky and the 'DAlessio's, telling Chalky to feign acceptance of whatever deal they present.

Margaret has trouble calming herself at the League of Women's Voter lunch she is attending with Nucky. Assuming it's just pre-speech nerves, Nucky tries to inspire confidence: "After a while, you could get up there and sell snake oil." Margaret sings Bader's praises, but feels uncomfortable afterwards.

Capone, wearing a fedora instead of his usual cap, goes to the Four Deuces to apologize to Torrio. He asks to work at the brewery and offers to help fix the distribution side of things: Inspired by the bar mitzvah, he tells Torrio "I'm ready to be responsible for my actions."

Chalky meets with Lansky as well as Lucien and Matteo 'DAlessio, full of complaints about Nucky's business practices. Lansky tells Chalky he'll need 500 cases a month of the real stuff, while Matteo wagers Chalky will be able to keep himself in new Packards with the money he'll make. Realizing they were responsible for the lynching of his driver, Chalky draws his guns and asks, "How you know I drive a Packard?"

Angela apologizes to Mary for Jimmy's brutal beating of Robert. Mary plants the idea of the two of them running off to Paris with Tommy, and leaving their men behind.

Home from the League meeting, Margaret sits with Harrow and expresses regret for her initial unfriendliness toward him. Harrow admits he has trouble with his face too - he looks in the mirror and can't remember who he was before.

Van Alden goes to a speakeasy and orders a drink. Noticing Lucy, he goes over to her table and joins her. The two end up at Van Alden's and they have sex.

Nucky and Jimmy arrive at Chalky's to find Lansky and the two 'DAlessio brothers tied up. Lansky tries to negotiate, but Jimmy is offended by Lucien and shoots him dead. Matteo's defiant mention of Chalky's driver only spurs Chalky to strangle him. Nucky lets Lansky go, instructing him to tell Rothstein what he just witnessed.

Nucky returns home late and explains to Margaret he was working on election strategy. Getting up, she stares at her own reflection.