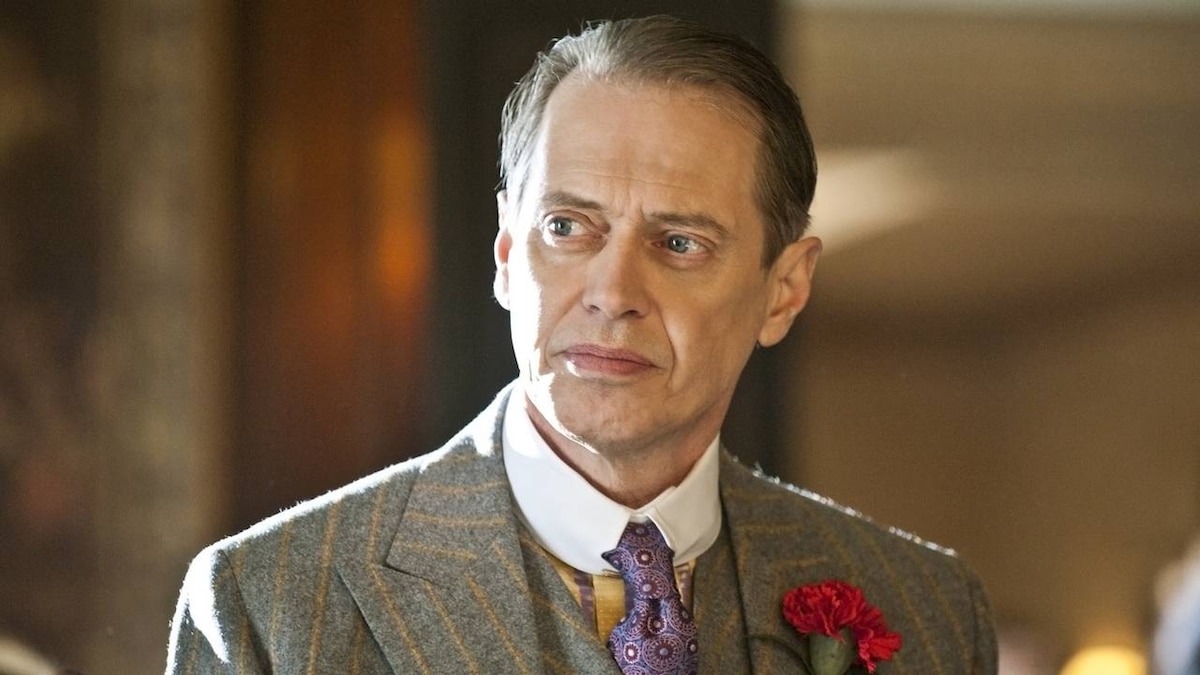 Hold Me in Paradise

With Nucky in Chicago for the Republican Convention, Eli fills in, certain he can do the job just as well. Only one man shows up: Ward Boss O'Neill, who needs a day off, but worries that there won't be anyone to sub in for him since Neary's arrest. Eli grants him leave and promises to make arrangements with the other men to handle his collections.

In Chicago, Nucky greases a hotel manager's palm to upgrade himself to the Presidential Suite and bump presumed-Republican candidate General Leonard Wood down to the Ambassador Suite. Senator Edge, in town looking for the vice presidential nomination in the upcoming 1920 election, meets up with Nucky and asks him to stop in at a party being hosted by Harry Daugherty, campaign manager for Warren Harding.

Margaret is enjoying tea in the Ritz lobby with Annabelle when Madame Jeunet approaches asking for help: Lucy insists on purchasing items on Nucky's credit. Arriving at their table, a drunk Lucy accuses Annabelle of being a false friend. Margaret tries to control Lucy, but ends up slapping her.

Gillian, aware that Angela has bills past due, suggests she consider some type of work, like sales or stenography. Angela is uninterested, and confides she's hoping that an art dealer in New York will represent her paintings. At the post office, Van Alden intercepts a letter from Jimmy to Angela stuffed with money. Van Alden scans its contents and drops it into a drawer filled with similar letters.

Rothstein meets with his lawyer again to practice his testimony about the World Series fix. "Not only was I not in on the deal, I furthermore did not bet one red cent on the Series..." he recites.

Nucky attends Daugherty's party and hears the campaign manager out about his candidate, Warren Harding. "The field has no first-raters and Harding's the best of the second-raters," Nucky agrees. Taking notice of a woman and her baby who are refused entrance to the party, Nucky chats with her later in the lobby and discovers she's Nan Britton, a "friend" of Harding's. When Nucky compliments Nan's baby, she asks if he has any of his own. He reveals he had a son who died.

Rose Van Alden weeps through breakfast with her husband; she's infertile. Rose tries to discuss a surgical solution, one that proved successful for a friend, but Van Alden refuses to hear it and is upset she is discussing private matters outside of their home. Van Alden points out that they can hardly afford the $275 procedure, but promises to consider it to get his wife to stop sobbing.

Nucky sits down with Torrio at the Four Deuces. Torrio, who is full of praise for Jimmy, introduces Nucky to Judge Graves of Ohio who can tell him more about Harding's campaign manager Harry Daugherty. Graves acknowledges that Harding is just a puppet, but he approves of Daugherty, a man who knows how to take care of friends. Jimmy comes downstairs to toss a disrespectful john out, and spots Nucky. Noticing his new suit, Nucky suggests Jimmy consider sending money to his family rather than spend it all on himself. Jimmy is confused - he's been sending money home every week.

Eli arrives at the casino for the pickup and is shot in the stomach by one of the 'DAlessio brothers, who have already held up the place. Nucky, who gets news of the heist while at dinner with Edge, phones Margaret and asks her to safeguard a ledger in his office at the Ritz. He instructs her to move her kids to the hotel as well until his return the next day.

Nucky waits for Jimmy at the Four Deuces. When he finally shows, Nucky asks Jimmy to come back to Atlantic City. "We're at war, kid," he says. Jimmy reminds Nucky that he was hardly hospitable during their meeting earlier and there's still the matter of Van Alden. Nucky counters with an offer of five percent of any liquor arriving by boat, 10 percent of what comes on wheels, and a promise to take care of Van Alden. Jimmy says he'll think it over but Nucky cautions Jimmy not to overestimate himself; the Italians who run Chicago will stop him from getting too far.

Margaret retrieves the ledger but resists the urge to open it. The phone rings while she's in Nucky's office, but there's no one on the other line. As he prepares to leave Chicago, Nucky notifies Daugherty that he'll swing New Jersey's votes for Harding - in exchange for blocking Senator Edge from the vice president spot. To further sweeten the deal, Nucky arranges to bring Nan to Atlantic City to keep her out of the way until the election. As his final order of business, Nucky confronts Edge with the information that he knows the Senator already promised the road money he wanted to Frank Hague. "The only chance you have of entering the White House is on a guided f***ing tour," he informs him.

Jimmy calls Gillian and gets a report from her about Luciano. Meeting up with Torrio's crew later, he is unable to join the Italians as they laugh it up playing cards in their native tongue.

Van Alden receives a letter from Rose with a pamphlet about the surgery she is interested in. Reaching in the drawer full of Jimmy's letters to Angela, he starts piling up the cash. Rose begins to cry when she gets his reply: Van Alden has refused the surgery and advises her to "trust in God's plan." In Atlantic City, Angela is surprised to receive an envelope stuffed with money.

Nucky returns to Chicago by train, accompanied by Nan Britton and her baby. En route, Nan reads a poem that Harding wrote her, "I love your poise of perfect thighs/ When they hold me in paradise." While still on the train, Nucky gets word that Harding has won the nomination.

Nucky visits his brother and lets him know he asked Jimmy to come back too. "It's a new world," concedes Eli. At the Ritz, Margaret opens Nucky's ledger and begins reading.