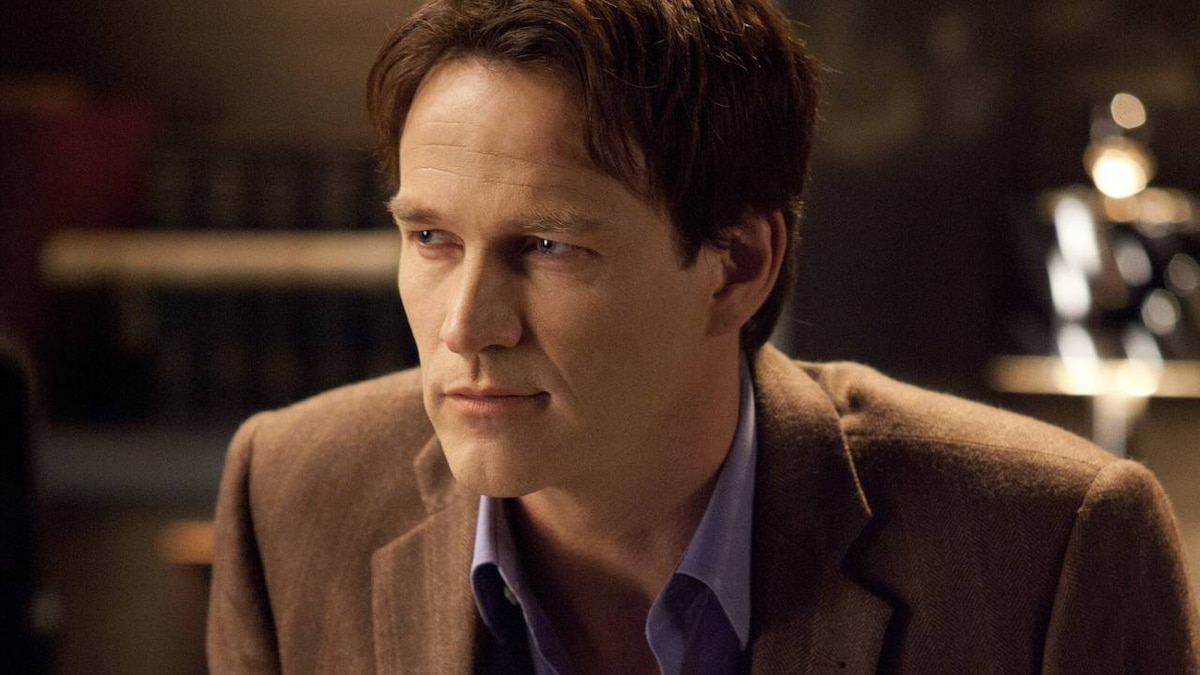 Me and the Devil

Tommy struggles to free himself from the chains Joe Lee has wrapped around his neck. He plays possum, and when Joe Lee turns away, Tommy attacks him, landing a fatal blow with a metal pipe. Melinda rushes over to Joe Lee's defense, and Tommy dispatches her with a single swing. Realizing what he's done, Tommy grabs her lifeless body and cries out, "Momma."

Out in the woods, Marnie reveals to Jesus, Lafayette and Tara that she was possessed when casting the spell on Pam, just as she had been when she made Eric lose his memory. "Whatever words I spoke," she says, "came from another consciousness. I was just a conduit." Marnie is convinced that the spirit is benevolent and only there to protect them. The others don't see it that way. Freaked out and afraid they've now angered another powerful vampire, they leave Marnie alone in the woods.

After Terry and Arlene discovered the words "baby not yours" scribbled in red marker on the wall, Terry suggests they bring in a preacher to perform an exorcism of what Arlene believes is Rene's ghost. Reverend Daniels and his new wife Lettie Mae Daniels (née Thornton) sing their way around the house, inviting Jesus in and escorting the demon out. As Terry and Arlene sleep peacefully that night, a book of matches in their bedroom seemingly self-ignites.

In Sookie's home, Eric dreams of his maker Godric—whom he doesn't recognize in his memory-less state. Godric encourages his progeny to taste Sookie and embrace his vampire nature. Though at first reluctant, Eric is swayed and begins to feed, waking himself up. He goes up to Sookie's room with his fangs out, but when she wakes with a start, he tells her that he's just had a bad dream.

Sookie gets a psychic reading from Marnie. Marnie channels Sookie's Gran, who asks Sookie to take care of Jason, beware of Eric, and stay away from Marnie—a grave threat. Sookie leaves abruptly saying, "When my Gran tells me to run, I run." Soon after, Bill's mole Katerina comes by the MoonGoddess Emporium. She's lured Marnie into a trap, and takes her prisoner at Bill's house.

Sam helps Tommy dispose of his parents' bodies. When a V'd-up Andy Bellefleur spots them driving by, the sheriff pulls them over and demands to look inside the van. Tommy shifts into an alligator and scares Andy off. Later that night, they dump the bodies in a swamp, where they're eaten by regular, non-shifter gators.

Pam, her face half rotted, approaches Bill and demands that he take care of the witches. Bound by the Authority to refrain from murdering a human, Bill questions Marnie in his home instead. She says her only intention is to gather peacefully and practice her religion, that she doesn't know what spell she cast on Eric, and that she is unable to reverse what she's done to Pam. Bill glamours her to make sure, but she's telling the truth.

Lafayette and Jesus leave Bon Temps for Mexico, where they plan to ask for the assistance of Jesus's grandfather, a true brujo. Tara decides to stay behind. She tells Sookie all about her relationship with Naomi—including the fact that Naomi has just discovered she's been lying about her identity. As darkness falls and Eric emerges from his cubby, Tara is shocked and upset. Yelling at Sookie, she recounts all the horrible things Eric has done to her and the people she cares about—tricking her into drinking his blood, torturing Lafayette—then she storms out.

When Eric hears what he's done to Sookie, he decides to leave the house for her own safety. He tells her, "There's a light in you, it's beautiful. I couldn't bear it if I snuffed it out." As Eric makes his way out, Sookie chases after him. Outside the house, they embrace. Sookie brings his face toward hers and they kiss passionately.

Bill convenes a meeting of the sheriffs in his territory to tell them about the threat the witches pose to them. When one of the sheriffs scoffs, another one, Luis, shares his story. During the Inquisition, as a witch was being burned alive she summoned vampires into the light. Under her spell, many vampires, disguised as priests and nuns, walked directly into the sunlight—including Luis's maker. When Bill reiterates that no one is allowed to kill the witch, Pam gets increasingly upset. She accidentally reveals that Eric's lost his memory. Bill snaps at her and demands to know how she knows this, and where he's hiding. Pam admits that he's staying at Sookie's and Bill speeds out the door.