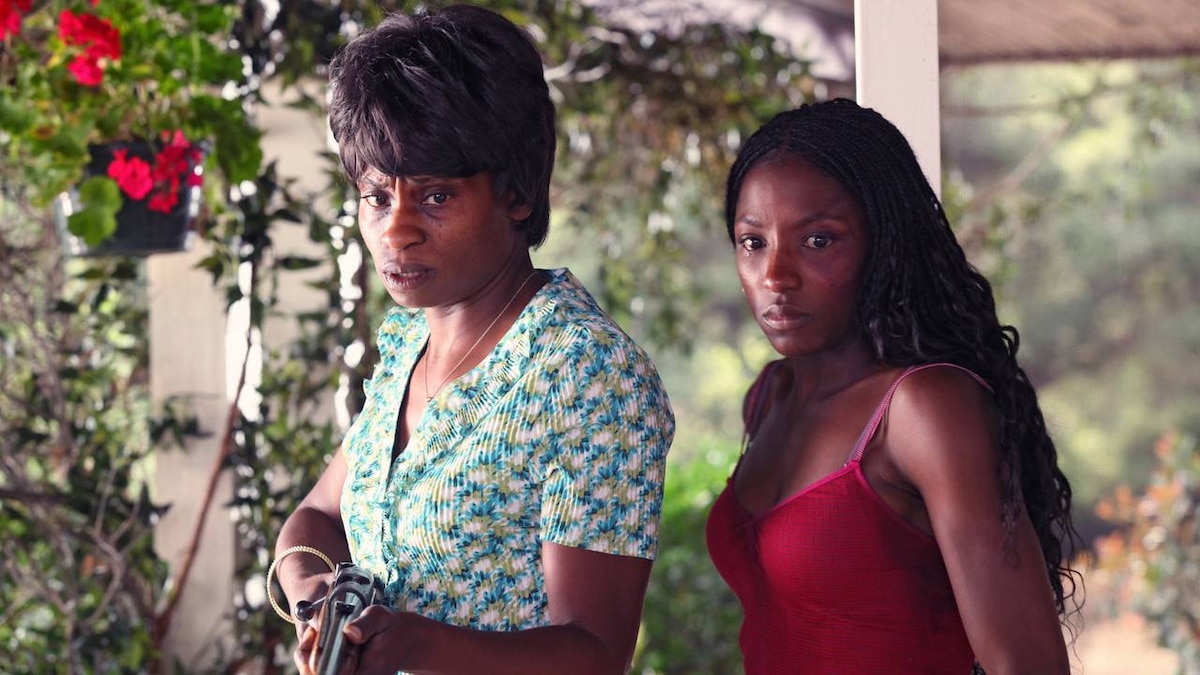 Inside her eclectic but opulent mansion, Sophie-Ann - the Vampire Queen of Louisiana - feeds on the thigh of an agreeable young woman. Bill looks on, self-conscious. When the Queen finishes her meal, Bill explains that he needs to know how to kill the maenad that's been terrorizing Bon Temps. Sophie-Ann lets on enough about the creature to convince him she can help, but she then toys with Bill, insisting that he stay for a day and visit with her.

At the old Compton place, Hoyt manages to pry Jessica's fangs from his mother's neck. The young vampire struggles to explain that she couldn't listen to Maxine badmouth Hoyt any longer, but he's furious and yells at Jessica: "She's my mama! She gets to!" Gathering his bleeding and insane mother, he leaves.

Tara, unbound but blocked from leaving Lafayette's house, pleads with Sookie to let her go help Eggs. It's too dangerous, Sookie tells her, and then Lafayette piles on, informing Tara he won't let her go back to a man who beats her. This is news to Lettie Mae, and as she also starts to become involved, Tara loses it and screams that just because all their lives are miserable doesn't mean they should ruin hers, too. Stung, Lafayette handcuffs her to the coffee table and goes out on the porch to stand watch with a rifle.

At his bar, Sam explains to Andy and Jason that he can take on the shape of any animal. Predictably, this blows Jason's mind. But despite Sam's obvious familiarity with the supernatural, he fails to convince Jason to avoid Maryann. The young paramilitary trainee is determined to fight the maenad - with whatever weapons he and Andy can dig up at the police station. At this point in the conversation, Sam catches a movement outside, and when he goes to investigate, he finds Arlene's kids, Coby and Lisa, hiding hungry and frightened in the woods. Jason and Andy leave to gear up, and Sam takes the kids inside, telling Jason, "You're a damned fool." Sam fixes the kids some food, and as they eat and tell Sam about their mom, Coby suggests they ask a vampire for help ... giving Sam an idea.

Sookie and Lafayette stand guard on his porch when a text arrives from Bill, saying he'll be late. Sookie finds out from Lafayette that she isn't the only one having sex-filled dreams about Eric after drinking the vampire's blood. Inside the house, Tara goes to work on Lettie Mae, trying to convince her troubled mother to set her free - that this is the one chance to repair their relationship. Lettie gives in, tricking Lafayette into handing over his gun and then holding him and Sookie hostage as Tara makes a break for it.

Jason and Andy raid the arms locker at the police station, where Andy manages to subdue Bud Dearborn as the frenzied sheriff square-dances around the building firing his pistol. On the way out, a local named Kevin shoots Andy in the chest, and just as Jason turns a gun on the attacker, Andy lifts his shirt, showing Jason the Kevlar that saved his life.

Lafayette is nearly overcome with stress, hallucinations of Eric dancing before his eyes as Lettie Mae trains her gun on him. Still, he and Sookie manage to disarm her and escape - if rushing to Maryann's with plans to kill the creature counts as any kind of escape.

Tara hurries into Sookie's house, where she finds Eggs with his eyes blacked out and a big grin on his face. She tries to hustle him out the door, but Maryann corners her first. The maenad explains that Tara is the one who summoned her: Miss Jeanette's exorcism may have been fake, but the power of the ritual was enough to pique Maryann's curiosity about Bon Temps. Maryann vibrates lightly, which has no effect on Tara, who says she's free of the maenad's control now. So Maryann punches Tara in the face, hard, and when the girl looks up, her eyes have turned black. At this point, the mob from Merlotte's returns to tell Maryann about the return of her god and the smiting of Sam - and she's furious with their idiocy.

Hoyt does his best to console his mother in the kitchen of her house, but she's more concerned with the concoction she's "cooking" for Maryann's next bash. When Hoyt tries to stop her, she digs deep to hurt him, telling her son that he's always held her back from doing what she wanted. She says Hoyt is weak, just like his father was before he killed himself. This is news to Hoyt, who always thought his dad was shot by a burglar. "I lied," Maxine says. "Otherwise we never would've gotten the life insurance money."

Sam takes Arlene's kids to Fangtasia, hoping Eric will be able to help with the problems in Bon Temps. Cagey and condescending, Eric makes it clear to Sam that he's being generous by getting involved at all, though the vampire is secretly pleased at this opportunity to make an impression on Sookie. He tells Sam there is someone he can talk to and then flies off into the night - literally.

Bill lounges poolside with the Queen of Louisianna, who insists that he feed from her stable of humans. When she won't allow him to beg off, Bill capitulates, but he can't allow her to detain him any longer - Sookie needs his help. As he plays a game of Yahtzee with the Queen, he reminds her as politely as possible that he must leave. Finally, to keep him just a few minutes longer, she gives him the information he's looking for: The only way to kill Maryann is to let her meet the God Who Comes. Only then will she be vulnerable. Bill thanks her for her help and leaves, but he runs into Eric on his way out. Bill immediately understands the vampire's ploy to get closer to Sookie and warns Eric to stay away from her ... or else he'll tell the Queen that Eric is trafficking in vampire blood.

Sookie and Lafayette arrive at what's left of her house, and they are jumped by Terry and Arlene. Lafayette captures the couple's attention by scattering a bag full of pills on the ground, while Sookie heads to the house. Soon, however, Maryann and Karl catch up with Lafayette, and when he fires a shot at the maenad, she deflects the bullet into her manservant's skull.

Andy and Jason park their truck near Maryann's place and get ready to attack, but before they go, Andy tells Jason he thinks the all-star quarterback has had it too easy. Sounding like an idiot - but a credible one - Jason shoots back that being a ripped sex machine takes a lot of work. Not to mention that every person he's ever loved has died. Cowed, Andy nods, and the two of them bury the hatchet in preparation of what's to come.

Inside her house, Sookie finds a handful of deranged locals holed up in the kitchen. After an uncomfortably close encounter with Mike Spencer, she goes to her room, where she finds Tara and Eggs converting her bed into a nest for a giant egg. She turns to flee but runs into Lafayette, whose eyes have turned glassy and black.