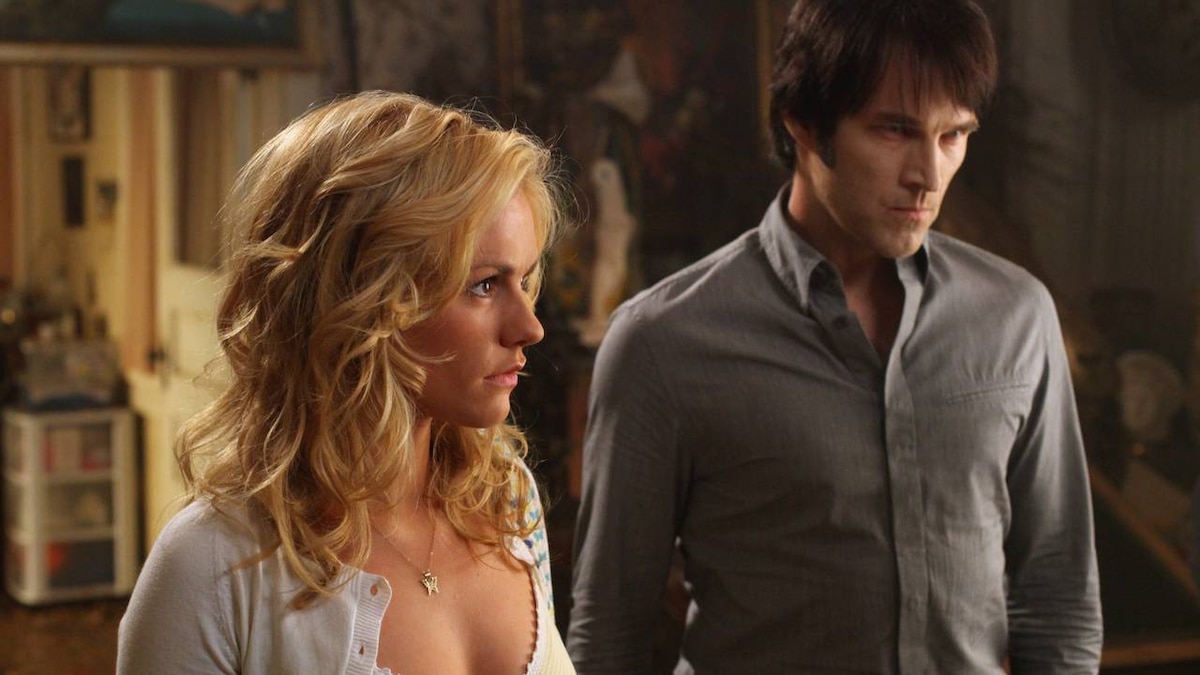 New World in My View

Sookie returns from the roof after Godric's death, shaken but more concerned about Eric, who she finds slumped over the edge of his bed, weeping tears of blood. She comforts him, kissing his face lightly, and when he responds with his own kiss on her lips, she returns it. As they become more passionate, Eric pulls back, his fangs clicking into place. Sookie reaches out, exploring his teeth gingerly with her fingers. Eric gets the message and dives into her throat - But Sookie snaps awake in the back seat of an Anubis Air hearse. It was just a dream ... again.

Maryann marshals her followers at the Stackhouse place, where a giant totem has been erected out of fruit, flowers, dirt, meat and God knows what else ... Karl and Eggs, his eyes black as pits, serve her every whim, promising to find Kobe beef too add to the monument as an offering to her God Who Comes.

In Andy's motel room, Sam hides as a car pulls up. It's the detective, returning from the deserted police station, and he's managed to find a bottle of booze along the way. Handing Sam the personal effects left behind in his jail cell, Andy still isn't clear on what's going on in town. The previous night's explanation feels pretty hazy. Sam quickly fills things in again: Maryann's an ancient creature called a maenad, the pig worked for her, she wants to sacrifice Sam to her god, and it may be impossible to kill her. As Andy tries to digest this, the phone rings - it's Arlene. She's calling from Merlotte's where a crowd of possessed townspeople has pinned her down, and she's afraid her kids are going to get hurt. Sam suspects it's a trap, but he can't bring himself to turn his back on her.

Sookie, Jason and Bill arrive at the old Compton house, and when Jason calls the sheriff's office, all he can raise is the answering machine. Something is obviously wrong in town, but any chance to discuss it slips away when Maxine Fortenberry - looking unkempt and sporting black eyes - stumbles down the stairs toward them. Hoyt and Jessica chase after her, and once they get Maxine under control, explain how the whole town's gone mad. Everyone's eyes have turned black, and they're planning to offer Sam as a human sacrifice. Jason decides he's going to Merlotte's to get to the bottom of things, despite Sookie's protests, and after Hoyt explains that Maryann has taken over the Stackhouse place, Sookie and Bill leave to confront her.

Sam and Andy arrive at Merlotte's and walk into the very trap they expected. One look at Arlene's eyes is all the warning they get before they're surrounded by lunatic townspeople. Andy pulls out his pistol, firing warning shots into the air, but it has no effect. Terry easily disarms him and empties the weapon into the walls, accidentally shooting the arm of a local man- who starts laughing. Sam and Andy flee into the walk-in refrigerator, sealing the door behind them. Terry, in full military mode, addresses the disappointed crowd, saying their mission has been accomplished: The targets are trapped. He orders Jane Bodehouse to call Maryann to report the victory, and everyone cheers.

At Lafayette's house, he and Lettie Mae have tied up Tara, who spouts the most hurtful words her possessed mind can come up with. Lettie Mae starts to pray, and when her nephew joins in, she looks shocked. "Jesus and I agreed to see other people," he tells her. "Don't mean we still don't talk time to time."

When Bill and Sookie arrive and find Maryann's totem in the front yard of Sookie's house, it's clear things have gone even further than they suspected. The inside of the house is decorated with branches and candles; dirt and leaves are strewn everywhere. As Sookie takes it all in, her cell phone rings. It's Lafayette, asking for her help with Tara and warning her to get out of the house right away. She hangs up, but Maryann appears, blocking their escape. Bill sinks his fangs into their enemy's neck, but her black blood causes him to foam at the mouth and vomit. Sookie immediately understands that Maryann was the creature that attacked her in the woods, and when the strange woman advances, Sookie pushes back and is stunned to see sparks burst from her hands and shock Maryann. With no idea what just happened, she and Bill flee into the night.

Jason arrives at Merlotte's armed with all the power tools he can carry. He sneaks into the bar and, cranking up a chainsaw, threatens all the locals gathered in the place. They don't even blink. Even when he sinks the blade into the bar, they only laugh and cheer him on. Changing tacks, he grabs Arlene and holds a nail gun to her head, and though most of the group urges him to shoot her (Alrene included), Terry steps in to save his "special lady." He orders everyone out of the bar, and Jason manages to rescue Andy and Sam. The reprieve is brief, however. No sooner do the men collect their thoughts and compare notes than a window shatters in the bar and the whole mob floods back in. Sam, realizing Maryann's minions will never stop, turns himself over to them. But once they get him outside the bar, Jason reappears wearing a gas mask and hurling road flares - impersonating the God Who Comes. As Andy holds up a stick behind him to look like horns, Jason "smites" Sam, who shifts into a fly, giving the appearance that he's been vaporized. Disappointed at the lack of destruction but convinced nonetheless, Maryann's followers wander off to give her the good news.

Sookie and Bill make it to Lafayette's house, where they find Tara in her strange state. Sookie tries to gaze into her friend's mind but sees only darkness - as if Tara doesn't exist at all. Bill suggests he try to glamour her while Sookie uses her power, and the tandem effort manages to break through, freeing Tara from the power of Maryann's will. But the reality that Tara's returned to is far more painful than being possessed - she needs to go save Eggs, she says.

Outside on the porch, Bill tells Sookie that he knows one vampire who may be able to tell them how to kill Maryann. But he must go alone. Sookie objects, but when Bill explains to her that the people of Bon Temps need her help more than he does, she knows he's right. He kisses her quickly and bolts away.

At Bill's house, Maxine is working herself into a frenzy, belittling her son and hurling insults at Jessica. Finally the young vampire reaches the limit of her tolerance and attacks Maxine. Hoyt looks on screaming as his girlfriend's fangs puncture his mother's jugular.

Bill arrives at his destination - a strange mansion patrolled by secret service agents, one of whom greets him, "Welcome Mr. Compton. She's expecting you." Bill steps inside, bowing to his host and greeting her, "Your majesty."