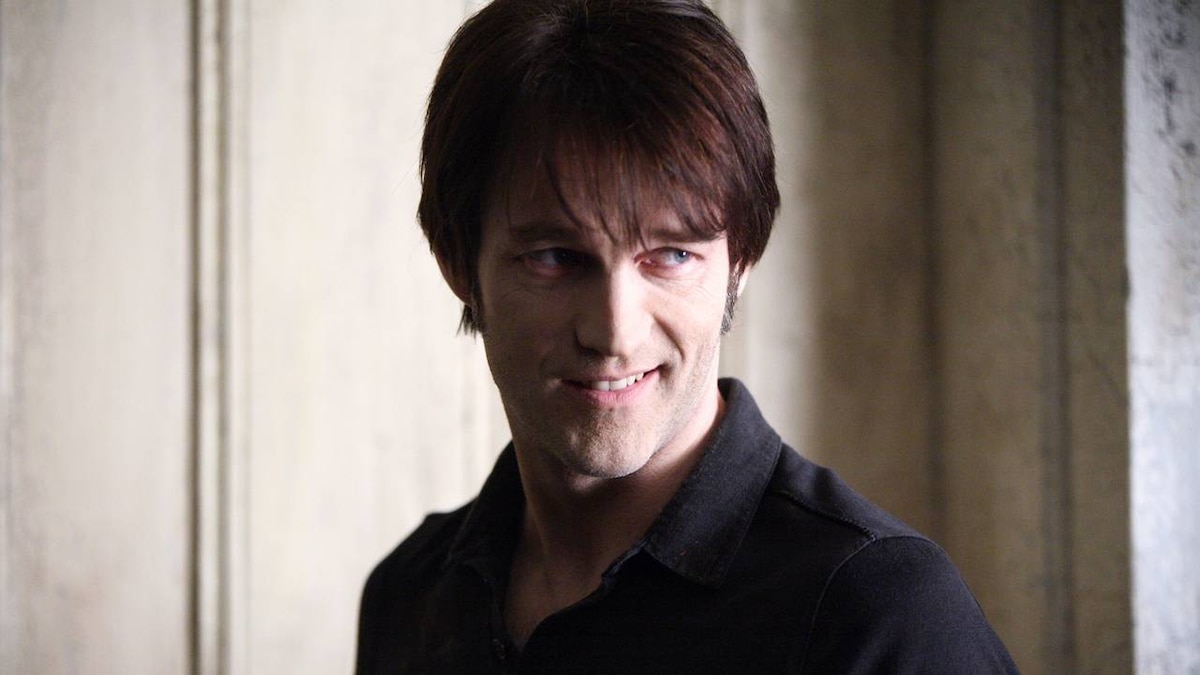 Lafayette looks on in complete shock as Royce's dismembered body parts rain down on the basement dungeon. Eric, spattered with blood and more concerned with the highlighting foils in his hair than the gore surrounding him, drags Lafayette upstairs for questioning. In a room with Pam and Chow, Lafayette cuts to the chase: He knows he's here for selling V, and he's willing to give up everyone he's dealt with. When Eric asks what happened to Eddie, the prisoner stumbles for a moment but then admits that it "might have been" Jason Stackhouse who killed the vampire. Eric and Pam - talking together in Swedish - quickly agree that punishing Jason would just complicate things with Sookie, but Eric isn't through yet. A friend of his, a vampire named Godric, has gone missing in Dallas, and Eric wants to know if Lafayette can give up any drainers who might be responsible. When he's unable to provide Eric with useful information, Lafayette is forced, screaming, back to the dungeon.

Bill and Sookie lounge in bed, enjoying the glow of the makeup sex they've just had - until Sookie is floored by the sudden realization that Jessica is in the house and probably heard every sound they just made. Their conversation shifts to dealing with the difficult young vampire, and Sookie - empathizing with the teenage outsider - thinks they should go easier on her. Bill, however, warns that she's too dangerous; her barely controlled impulses couldn't be further from human.

Jason, clean shaven and bright-eyed, rides a Light of Day Institute bus to the leadership conference, singing along with his fellow campers. Jason's seatmate, Luke, is a former all-American football player who's spent years awaiting this opportunity. Though he can't believe Jason's luck, being accepted so quickly, Luke suggests that they bunk together.

At Maryann's house, Tara approaches Eggs in the garden and tells him that she wants to know more about him. Protective of his past, Eggs tries to dodge her questions, but when she becomes worried, he fills her in: He use to live under a freeway overpass, and he's still broke. He spent time in prison for drugs and armed robbery ... and assault. The news concerns Tara, but at least now she knows the truth.

Sam's new waitress, Daphne, isn't showing much talent for her work. But Sam is more than happy to let her spill mustard all over the bar rather than wait on the woman sitting in Daphne's section: Maryann. He tries to take a hard line and kicker her out, but when Maryann reminds him that she forgave the $100,000 he stole from her, he backs off and takes her order - enough food to feed half of Bon Temps.

The LODI activities at Jason's conference are getting into full swing, kicking off with a welcome from Rev. Steve Newlin's attractive wife, Sarah, who speaks to the campers as they receive their silver "Rings of Honesty." The day culminates in a game of Capture the Flag, in which Jason and Luke find themselves competing head to head. After some determined back and forth, Jason takes Luke down with a fierce tackle, winning the game - and impressing Steve and Sarah.

Sookie stops by Merlotte's to visit Tara, asking her friend how everything's going. Tara admits that living with Maryann feels weird in some ways, so Sookie invites her to move into Gran's old house. Before Tara can answer, Daphne drops a tray across the room, and Tara hustles Sookie out before Sam can rope her into working during her night off. On the way out, they pass Maryann, who stops Sookie and introduces herself. Sookie is slightly suspicious, hearing weird chanting echoing in the woman's thoughts, but after reminding Tara to let her know if she wants to move in, she leaves. Maryann - once all eyes are off her - does not look pleased with Sookie's offer.

In the dungeon, Lafayette realizes that he might be able to use a metal rod from Royce's severed leg to break his chains. Using his feet to drag the body part closer to himself, he fishes through the flesh until he's able to yank Royce's femur off of the rod, which he then wraps his chain around and smashes against the floor until it snaps against the metal spike. Free, he escapes upstairs - to the empty daytime barroom of Fangtasia - but he's headed off by an armed, and somewhat off-base, woman named Ginger. Convinced she doesn't have the stomach to shoot him, Lafayette continues to advance ... until she blasts a hole in his thigh. He goes down, and she starts apologizing profusely, handing him towels to stem the bleeding.

With Bill out running errands, Sookie and Jessica spend time together at his house, talking about their families. Jessica, crying tears of blood, explains how she misses her parents and sister. Sookie, touched by Jessica's loss and relating it to her own feelings toward Gran, ignores her better judgment and agrees to drive Jessica by her parents' house - just to look in from across the street.

At a mall in Shreveport, Bill shops for something modest for Jessica to wear and is surprised when he turns around and finds Eric following him. The older vampire wants Sookie to help him track down his missing friend in Dallas. When Bill balks at the idea of sending her to Texas, Eric explains that he's only asking as a courtesy. He intends to use Sookie regardless of what Bill says.

Jason's superior performance during the Capture the Flag game has earned him the opportunity to act in a role-playing session with Sarah, in which she plays a vampire-rights advocate and he plays a Fellowship evangelist. Partway through the exercise, however, Sarah says he'll never change her mind because - as she pops in a set of plastic vampire fangs - she IS a vampire. Thinking fast, Jason grabs a flagpole from behind him, snaps it over his knee and lunges at Sarah with the makeshift stake at the ready. A hush falls over the crowd ... until Rev. Newlin starts clapping slowly. The applause builds, but Jason doesn't notice - his mind is busy replaying Eddie's grisly death.

Sookie's plan to make Jessica feel better goes horribly off the rails when, after stopping at the house, the vampire bolts out of her car and knocks on the door. Before Sookie can talk sense into the girl, Jessica's mother answers, overjoyed to see her daughter alive - or so she thinks. At Jessica's request, Mrs. Hamby invites them both inside.

At Merlotte's, Maryann continues to order food, and the liquor is flowing. At Maryann's request, even Andy Bellefleur - who's had a few himself - gets up to dance. At the bar, Eggs comes in to talk to Tara, explaining that he can't do anything about his past, but he is changing. "For the first time in my life," he tells her, "I actually like who I'm becoming." As the party spirals more and more out of control, Sam pulls Maryann into his office, demanding to know what she's done to these people. Her answer is to vibrate briefly, which transforms Sam into his dog form on the spot. She warns him to think twice before threatening her again.

Lafayette lies bleeding at Fangtasia, waiting for Eric to arrive and decide his fate. When the vampire enters, he offers to either kill him or let him bleed out, but Lafayette suggests a third option: turn him into a vampire. "I would be your bad-ass vampire," he promises. Eric smiles, and he, Pam and Chow descend on their injured prisoner.

Jessica's reunion with her family starts out alright, but after her father hugs her warmly, he quickly yells at her for disappearing. As his anger mounts, Jessica's fangs extend, which only infuriates him further. Sookie tries to get Jessica to calm down, but it's too late. The girl has her father up against the wall, his own belt wrapped around his neck. As she's about to bite into him, the door flies off its hinges and Bill stands in the doorway. Furious, he commands Jessica to release her father and orders Sookie to get out. "This is your fault," he screams at her. "Now get the hell out of here!"