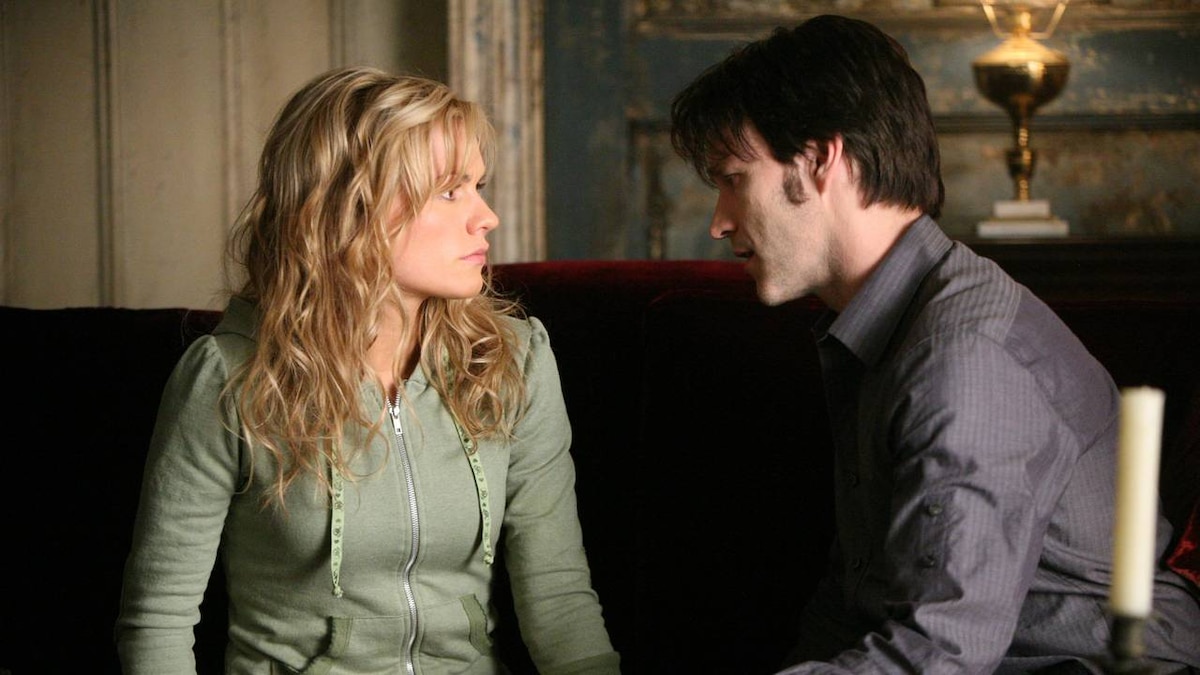 Nothing But the Blood

In the parking lot outside Merlotte's, Tara screams her head off. A foot, toenails painted red, protrudes from a trash bag in the trunk of Andy Bellefleur's car. Drunk but taking charge, Andy steps up and yanks the bag aside, revealing the body of Miss Jeanette, whose heart has been ripped from her chest.

When the police arrive, Officer Kenya Jones questions Tara, who at first denies knowing the victim. Sookie can hear her friend's thoughts, however, and counsels Tara to be honest with the police. Sheriff Dearborn is also on the scene - and noticing that his lead detective has had a few too many - when Tara comes clean with Kenya, ensuring a long night of questioning.

Bill Compton's also in for a taxing night with Jessica, who doesn't appreciate the list of conservative rules she must abide by while living under his roof. After Bill takes a call from Sookie (and explains to Jessica that she's not allowed to eat his girlfriend when she arrives), he sends the girl upstairs to change into some more modest clothes in preparation for the big introduction.

In some unknown dungeon, filled with haunted and broken people dressed in rags, Lafayette does his best to hold himself together despite looking several weeks worse for wear. The door swings open, and everyone cringes as a hooded prisoner is thrown into the room, blubbering. It's Royce, one of the rednecks from Bon Temps.

Bud and Kenya interview Tara at the police station, trying to get to the bottom of her relationship with Miss Jeanette. In light of Tara's "pig on the highway" story, they're not inclined to believe her recap of the exorcism in the woods, but when Lettie Mae arrives - beside herself over her savior's death - she corroborates Tara's account. But when her daughter explains that their "demons" were just part of a scam, Lettie Mae loses her composure.

Maryann rushes to the police station to pick Tara up, and when she sees Lettie Mae outside, warmly introduces herself and coos: "I've always wondered what it would be like to gaze into the eyes of someone so devoid of human compassion that she would abandon her own child when she needed you most." Lettie Mae sputters, and Tara - pleasantly shocked - jumps in the car with Maryann.

When Sookie arrives at Bill's house, any opportunity to finesse his confession evaporates when Jessica steps out of the bathroom wearing nothing but a towel. Sookie is shocked that Bill was forced to turn Jessica (and feels a bit guilty for her role in the situation), but she's unable to accept that he's kept this secret from her for so long. "What else are you keeping from me," she asks before walking out the door.

At a hotel ballroom in Shreveport, the anti-vampire group Fellowship of the Sun holds a prayer breakfast. Jason is here to meet the Rev. Steve Newlin, whose book has been comforting the young man through his recent difficulties. Introduced by Fellowship supporter Orry Dawson, the two of them hit it off, and Steve and his wife Sarah invite Jason to the Light of Day Institute, a special program that comes with a special price tag: $1,200.

Sam drops in at Maryann's house, where her manservant Karl answers the door. While Sam waits in the foyer, his attention shifts to an ancient statuette, and he flashes back to his previous encounter with Maryann. A 17-year-old Sam in dog form scrambles through a doggie door into a stranger's home. Inside, he finds a table stacked with food, and when he reaches for the odd (and likely valuable) statuette, Maryann surprises him but promises not to call the police ... He snaps out of it as Karl returns to inform him that Maryann is asleep. As Sam leaves, he notices the giant pig outside, watching him.

Sookie, doing her best to pack up Gran's bedroom, answers a ring at the door to find Sid Matt Lancaster, the family lawyer. He delivers the bad new that her Uncle Bartlett is dead, found in the creek that runs behind his home. Offering condolences, Sid Matt also hands over a check for $11,000 - the man's entire estate, which he willed to Sookie.

At Maryann's house, she lounges poolside with Tara and Eggs, dispensing her strange brand of wisdom over a joint. As Maryann explains how the Greeks considered their gods much more accessible than people today do, Tara adds that her mother thinks she has "a direct line to Jesus." Maryann and Eggs suggest she stop fixating on the misery Lettie-Mae causes, and when Maryann leaves to get more food, Eggs and Tara start to get cozy together. Karl interrupts their moment, offering towels. When he returns to the house, Maryann smacks him viciously to the ground: "Nobody. Needed. TOWELS!"

At work on the road crew, Jason and Hoyt talk about Rene and how they strangely miss him despite the fact that he was a psychotic killer. Jason can't balance out these feelings of loss and anger any more than he can reconcile the Fellowhip's hatred of vampires with a strong sense that he belongs with them. As he explains to Hoyt how Orry came to him in jail, Sookie pulls up. She doesn't want the check from Uncle Bartlett - refuses to accept it, in fact - and forces the money into Jason's hands. Jason thanks God, recognizing this sign that he's meant to go to the Light of Day Institute.

Sam, daydreaming in his office, again remembers the first time he met Maryann: The two of them have sex, and as she climaxes, she begins to vibrate in a strange, supernatural way. Afterward, while she showers, he flees, stealing a bag of cash from her house. A knock at his door interrupts the memory, and Arlene comes in to introduce Daphne, a pretty young woman who she insists Sam's got to hire to help out with the waitressing.

Later that night, Andy is back in the bar, drunkenly "investigating" the murder of Miss Jeanette and getting on everyone's nerves. When he stumbles into Bud, though, the sheriff loses his patience and takes Andy off the case. Across the bar, Jason and Hoyt do their best to rekindle their days of carousing, but something is off. When Jason tells a bar skank named Shawnelle that he needs to "stay pure," it's clear the party is over.

Later, Maryann shows up in Sam's office, saying she was told he has a gift for her. He tries to apologize and return the money he stole, but she's not interested. When he warns that he won't let her hurt Tara to get back at him, Maryann laughs sinisterly and asks him, "How in the world did you get the impression this is about you?"

Back at the old Compton place, Bill tries to find the right mixture of Tru Blood flavors to satisfy Jessica. "Two parts O-negative, one part B-positive," he says. "Remember that." When Sookie shows up to talk to Bill, she charms Jessica into leaving them alone to talk, surprising her boyfriend with the subtle act. Forcing herself to be calm, Sookie asks whether Bill killed her Uncle Bartlett. He admits that he murdered the old man for what he'd done to her, and Sookie replies that she can't worry about someone dying any time she gets hurt. Bill promises to atone for what he's done and says he can't lose her - that she's showed him that love isn't lost to him as he thought it was. "I love you," she tells him as they kiss passionately and head toward the bedroom ...

In the dungeon, Royce tells Lafayette that he's going to try to escape when he hears someone opening the door. It's Eric, who's come to take Royce upstairs for questioning about the fire that killed three vampires in town. But when Eric starts to take him away, Royce gouges the vampire's face with a silver cross pendant. Irritated but unharmed, Eric dismembers the redneck on the spot, showering Lafayette with gore as Royce squeals in agony.