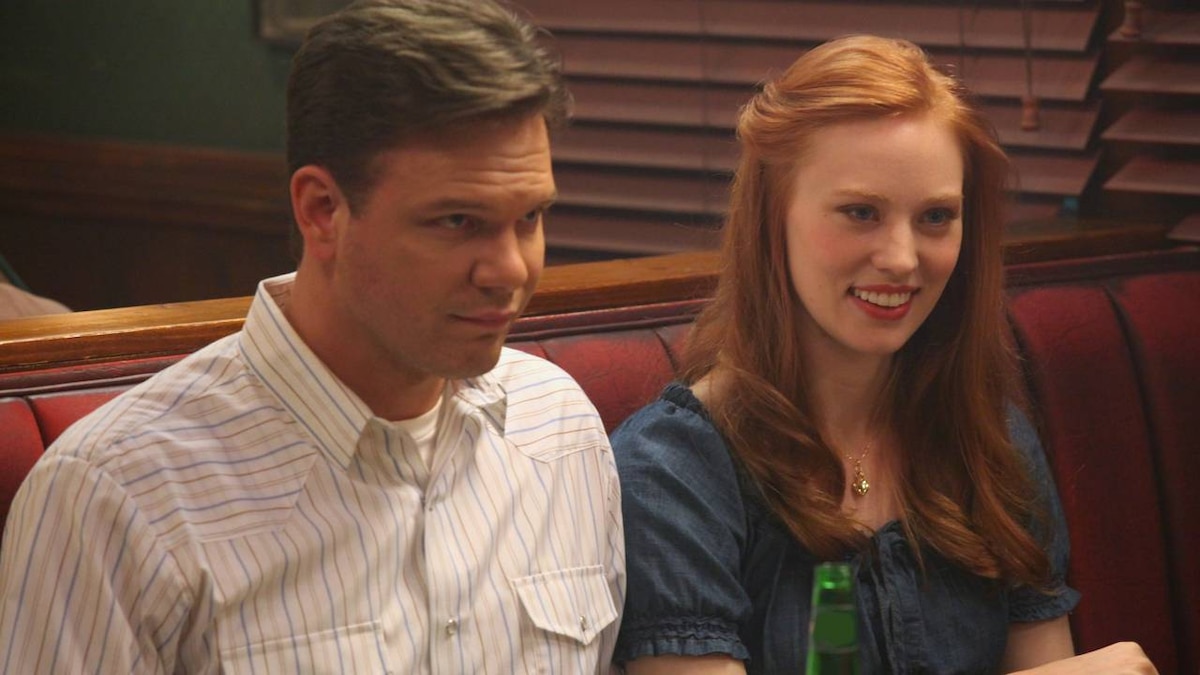 I Will Rise Up

Outside the Dallas vampire lair, Bill sends Lorena away, telling her that she's dead to him. Their farewell is cut short, however, when an explosion erupts behind them - Luke has detonated the bomb strapped to his chest.

Bill races inside, where he scans the bloody tableau, calling Sookie's name. She's alive, shielded by Eric, who urges Bill to chase after the rest of the Soldiers of the Sun before they can escape. Bill catches a young boy, who pleads for his life, but Bill sinks his fangs into the enemy's neck. The vampire doesn't drain him, though; he sends the soldier back to the Fellowship, commanding him to tell his leader that vampires showed him mercy.

Inside the gore-spattered lair, Eric tells Sookie that the silver shrapnel he's taken is killing him - she'll have to suck it out to save him. Disgusted but grateful for his help, she agrees. But when Bill comes back inside and finds her working on the second slug in Eric's chest, he's furious. The silver was no threat, Bill tells Sookie; it was just a ploy to get her to drink the Nordic vampire's blood. Now, they'll share a connection forever.

Isabel and the other Dallas vamps conduct a survey of the damage - a few destroyed vampires, Stan included, and several humans - and then Godric orders everyone to reconvene at the Hotel Carmilla. Once Bill and Sookie make it back to their hotel room, they vent over Eric's trickery. Though Bill is furious, he doesn't blame Sookie. It was, after all, her goodness and desire to help that Eric took advantage of. He warns Sookie, though, that she may start to feel a sexual attraction toward the older vampire ... It's part of the blood's power.

At Bill's house in Bon Temps, Hoyt tries to comfort Jessica, who's still upset over her permanent virginity. Adamant that it doesn't affect their relationship, Hoyt suggests they take things to the next level: It's time for Jessica to meet his mom.

Covered in bruises from their fight, Tara and Eggs continue the disturbing trend of remembering nothing from the previous night. And they aren't amused when Maryann makes light of it as they compare notes in Sookie's kitchen. Maryann suggests that maybe it isn't so bad to lose control. Maybe the two of them are reaching a higher plane. Eggs is willing to consider the idea, but Tara, who's spent decades on the receiving end of a raging drunk's blackouts, is not about to accept inebriation as a spiritual journey.

At the hotel Carmilla, Jason has taken over Jessica's room. He and Sookie both loaf around, miserable after the events of the past few days. Jason tries to explain how he ended up with the Fellowship, that they made him feel like he was worth something. Sookie, understanding but still incredulous, asks if he ever thought for a moment what Gran would think of a group like the Fellowship. Jason says he can't think about Gran. It's too hard. He and Sookie are all alone now, and they have to stick together and be a family. He apologizes for being a "dumbass f**kup," and Sookie smiles. They're as close as they've been in a long time. As their heart-to-heart ends, the Newlins come on the hotel TV, melting down fantastically during an interview with Nan Flanagan. As the spokeswoman for the American Vampire League grills them about their involvement in the suicide bombing, Steve and Sarah devolve into outright bickering in front of the camera.

At Merlotte's, Arlene approaches Terry carefully, trying to address the nights they've spent together that neither of them remember. Terry's squirrelly at first, but as Arlene becomes upset, he opens up, telling her that he can't remember whether they had sex. Glad that they've both been granted a dubious pass on this one, Arlene takes his hand and gives it a squeeze. Out in the dining room, though, things don't go so smoothly once Lafayette gets a look at the bruises covering his cousin. He can't believe Tara would let Eggs hit her - especially after living with an abusive mother her whole life. The cook lunges at Eggs, who's just as ready to fight, causing a scene in the middle of the restaurant. Tara manages to separate them and drag Eggs out the door, taking a wayward punch from him in the process.

Hoyt confronts his mother in her kitchen, demanding to know why she's so filled with hate. Her prejudice extends far beyond vampires, he points out - all the way to families with lots of kids and women who wear red shoes. She doesn't know what to say, only that he's her baby boy and she doesn't want to lose him. Frustrated, he assures her he's a "grown-ass man" and isn't willing to tolerate any rudeness toward Jessica.

Sookie sleeps beside Bill at the Hotel Carmilla, but she dreams of Eric - naked and in bed beside her. Even worse, he's charming. Teasing, he tells her she'd make a great vampire, and she argues playfully with him. But the fantasy goes south when Lorena appears at the foot of the bed and reminds Sookie that she's betraying Bill. Sookie wakes with a start.

Sam - along with half of Bon Temps - sits in jail as an exhausted Bud Dearborn tries to figure out what to do with everyone. Maryann shows up looking for Sam and suggests the sheriff make things a little easier on himself by releasing all the revelers he's picked up. Vibrating quickly, she takes control of Bud, smiling as his eyes turn black. She stalks into the holding area and demands to see Sam Merlotte. But the bar owner has transformed into an insect and flown away, leaving nothing but his clothes behind on the floor of the cell.

Hoyt introduces Jessica to his mother at Merlotte's, but in spite of his warnings, Maxine doesn't cooperate. Jessica tries to win her over with compliments, but the older woman is obstinate, telling Jessica that she can't allow her son to spend the rest of his life with a vampire who can't give him children. Crushed, Jessica leaves, with Hoyt following behind.

At Sookie's house, Eggs, Tara and Maryann play cards - until Lafayette and Lettie Mae interrupt. They want Tara, and even after her eyes turn black and she starts to rage against them, Lafayette drags her out the door. Eggs tries to follow - his eyes also black - but Maryann tells him to stop, sure that Tara will come back on her own.

Nan Flanagan shows up at the Hotel Carmilla to dress down the Dallas vamps for their involvement in this "PR mess." Godric insists on taking all the responsibility, giving up his title as sheriff. Eric balks at Nan's rudeness toward his maker, but Godric doesn't care. And when he explains that he agreed to meet the sun, that the humans weren't holding him against his will, everyone is shocked. But Godric just seems tired. He apologizes to the group for all the harm he's caused and tells Eric, who's beside himself with anger toward Nan, that they need to talk. As the meeting breaks up, Bill approaches Eric calmly and then punches the vampire in the face. Eric gazes back coolly, telling Bill, "That doesn't change anything. I'm part of her now."

Maryann walks into Merlotte's, her easygoing act cast aside to reveal a glimpse at her true power. In an otherworldly voice, she informs the room: "The God Who Comes demands his sacrifice. Where is Sam Merlotte?" Everyone's eyes turn black. But Sam is nowhere to be found.

On the roof of Hotel Carmilla, Godric tells Eric that he can no longer exist as a vampire. It's unnatural, he says, and it must end. Eric's heart is breaking, and he says he won't let Godric go alone. But as Eric's maker, the older vampire commands him to leave. Sookie arrives, and though she can only pull patches of English from their Swedish conversation, she knows exactly what is going on. She promises Eric that she'll stay with Godric until the end. As sunrise nears, Eric says goodbye and goes inside. Sookie weeps softly next to Godric, who tells her that he's filled with joy. He warns her to stand back as the sun crests the horizon, and as she watches, Godric disappears into white-hot radiance.