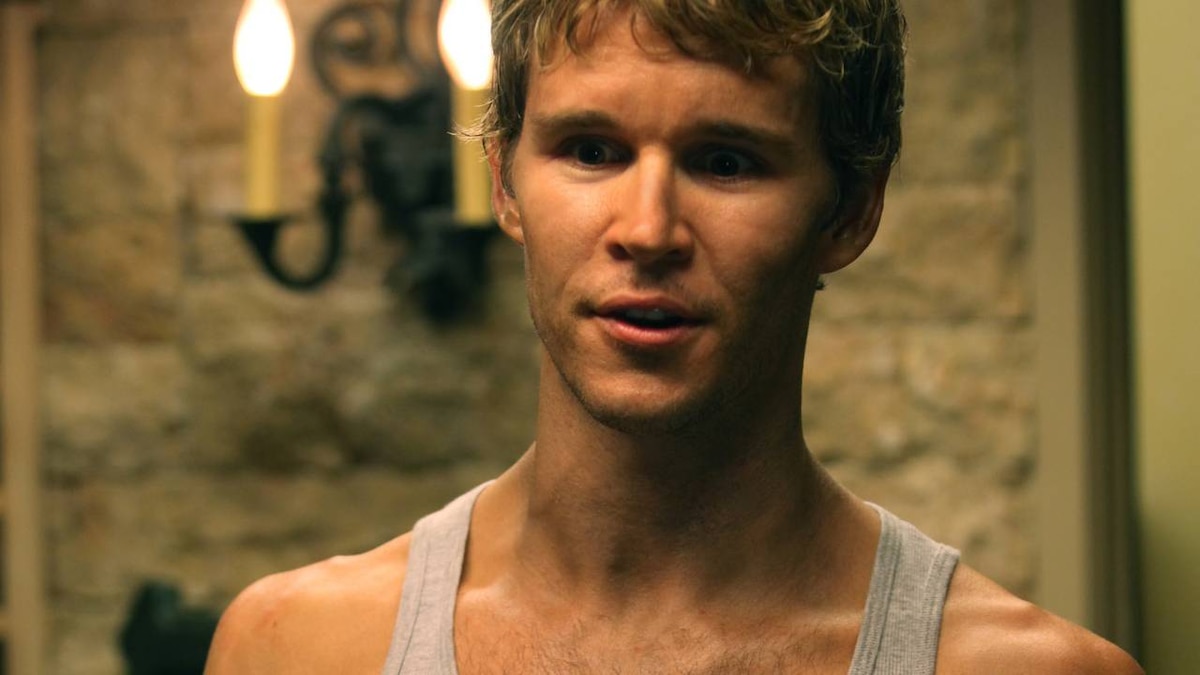 In the woods behind Sookie's house - where Tara's birthday party continues to rage unabated - Sam tries to play dumb after Daphne reveals that she knows his secret. Amused, she starts to strip down and Sam follows behind picking up the clothing she sheds ... until he finds a small doe standing in front of him - a doe that shifts into Daphne before his eyes. Shocked and thrilled, Sam accepts her kiss, but their moment is interrupted when Terry and Arlene, looking for some privacy of their own, stumble awkwardly into the boss and his naked employee. "It's in the air, I guess," Arlene says.

Sookie chases Barry the bellhop down the hall at Hotel Carmilla, shouting wordlessly for him to stop. Giving in to her mental yelling, the other telepath finally stops to have a conversation. But Sookie's charming introduction and insistence that the two of them can learn from one another isn't enough to edge Barry past his fear that vampires will find out what he's capable of. Begging her to keep his secret, Barry leaves. When she returns to her room - breaking up Bill and Jessica's argument over ordering humans from the room service menu - Sookie brushes away Bill's fear that she doesn't understand the danger she's in. She also points out that their bedroom is perfectly secure, from sunlight as well as intruders, which means Bill can finally sleep with her. In the next room, Jessica experiences a bit of romance herself - chatting with Hoyt endlessly on the phone about TV and comic books.

At the Light of Day Institute, Jason and his fellow Soldiers of the Sun recruits get a rude awakening from Gabe - their holy drill sergeant. They all suit up and head outside, where Gabe screams his way through calisthenics training as Sarah looks on.

Sookie visits the hotel lobby to peruse the continental breakfast, but mostly she's hoping to take another crack at Barry. When she tries again to win him over, the bellhop says his telepathic ability has made life miserable for him. A nearby guest's thoughts start to invade their conversation, and Sookie explains to Barry that he can control the intrusion if he tries. But he tells her, "There's enough people in my brain already. You're on your own." When she reports back to Bill about finding another telepath, he's not happy about it. But when he asks Sookie to lay low so he can protect her, she balks: If she wanted to just shut up and take orders, she'd have stayed at Merlotte's. Bill gets her point but is concerned that Eric has been so intense about the situation. It's never good when 1,000-year-old vampires become unpredictable.

When Daphne arrives for work at Merlotte's, Arlene gives her a hard time about last night's unfinished prep work, obviously irritated that the new waitress is getting cozy with their boss. Sam soon walks in, but his quiet flirting with Daphne is cut short when Lafayette returns, as if from beyond the grave. Everyone is thrilled to see him - especially Sam, though the bar owner makes a show of being angry about his cook's unannounced vacation. Sam gladly welcomes him back, but he also notices Lafayette's newly disturbed bearing.

Tara, after waking up with Eggs in her bed, comes downstairs to find Maryann cooking. When the strange woman explains that her home was actually borrowed from a client and that she needs a new place to stay, Tara becomes flustered, apologizing but making it clear that she can't invite guests to stay at Sookie's. Maryann seems wounded, and when Tara goes into the living room to ask Eggs why Maryann moves around so much, he questions her sudden paranoia. "You have no clue what family is," he tells her.

Jason's LODI training has progressed to long runs, and many of his fellow recruits are flagging - namely Luke. As Gabe screams at Jason's competitor to climb over a chain-link fence, the former All-American's body just can't give any more. But when Gabe turns the situation over to the recruits to handle, Jason helps Luke over the fence, earning praise from Gabe and a gaze of utter joy from Sarah.

Bill, Sookie and Eric meet with the Dallas vampires - Stan and Isabel - in their up-market lair. Unfortunately, all the locals can do is bicker while Eric becomes more and more irritable. Stan wants to start an all-out war, and Isabel calls him out for making a power grab in Godric's absence. Finally Eric loses his tenuous cool, hurling a piece of art across the room. He vilifies the vampires for allowing a traitor to leak word of their arrival to the Fellowship, which sent an attacker to intercept Sookie at the airport. As the arguing begins anew, Sookie silences them all by volunteering to infiltrate the Fellowship, against Bill's protests. Bill pulls Eric aside, wanting to know exactly why this search for Godric is so important. Eric replies with the story of how he became a vampire - at Godric's hand. After Eric was mortally wounded in a Viking battle, the vampire (appearing to be little more than a teenage boy) struck at night, killing Eric's two companions but offering the wounded leader eternal life.

At the Newlin's house, Sarah and Steve quarrel quietly, the minister's wife angry that he doesn't fill her in on his plans for the church. Steve brushes her off when Jason enters the room, taking the young man to a secret bunker in the basement, where Steve has stockpiled weapons of every kind: crossbows, rifles, submachine guns, missile launchers, silver throwing stars ... This army of the Lord is getting more serious than anyone suspects.

That night, after Steve is gone, Jason lounges in the bath tub, recovering from his strenuous day. Sarah sneaks into the room, quietly locking the door behind her, and despite Jason's weak protests, starts to wash his chest. She explains that God wants Jason to receive a reward for all his hard work, and as her hand slips below the water's surface, he can't help but agree.

Maryann and Karl pull up outside Merlotte's, where a busy night is unfolding at the bar. Maryann closes her eyes, and as she concentrates the employees inside the bar start to unravel - with all their frustrations seemingly directed at Tara. Finally, the frazzled bartender loses it, yelling at all of her coworkers. Looking satisfied, Maryann signals Karl to drive away.

After the bar closes that night, Sam and Daphne finally have some time alone ... on the pool table. As they undress each other in the middle of the empty barroom, Sam goes for the joke. "Nice rack," he says. Daphne replies: "Nice balls."

When Tara gets home from her hellish night at work, she finds Maryann waiting up for her in the kitchen, dressed in a very Gran-like manner. She starts to tell Tara that they've started looking at houses, but Tara interrupts, telling Maryann she's welcome to stay.

At Hotel Carmilla, when Sookie asks a desk clerk where she can find Barry, she learns that the bellhop quit his job earlier that day. Disappointed, Sookie heads upstairs with Bill. As they settle into bed and things begin to heat up, a beautiful vampire walks by their door, baring her fangs when she hears the sounds coming from inside.