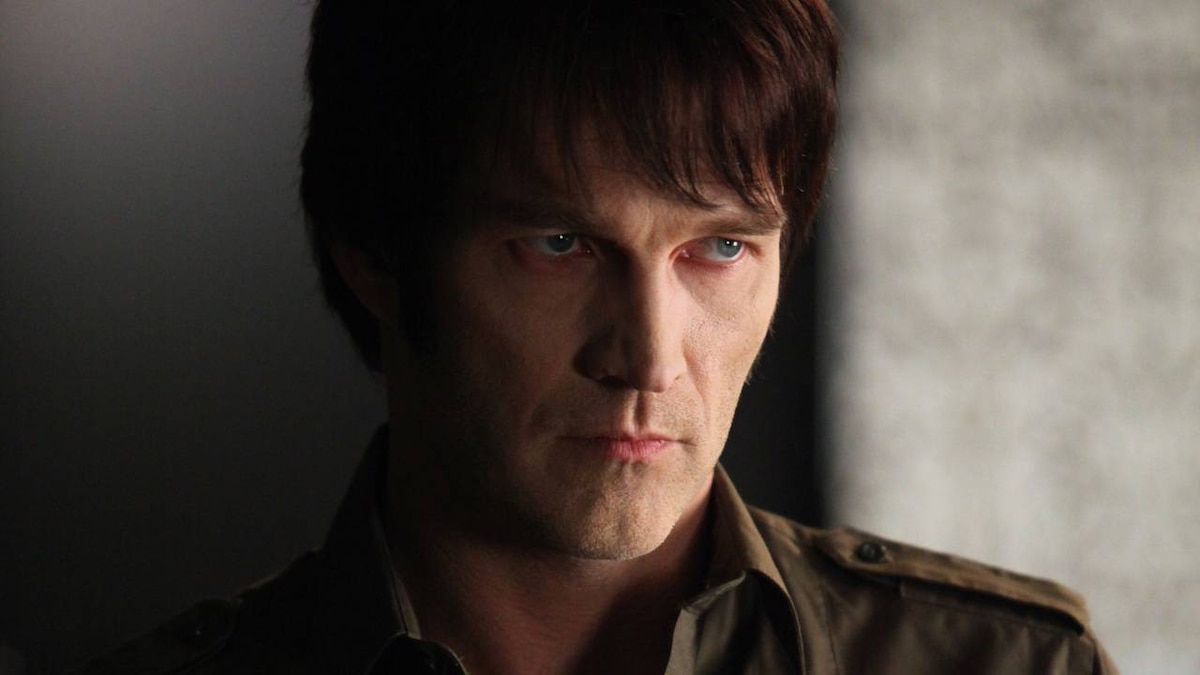 In the lobby of Hotel Carmilla, Eric feeds on a "blood hooker," a fang-marked young woman whose "sexy and scared" performance is every bit as desperate as her line of work. Eric, turned off by the farce, casts her aside to greet a visitor ... Lorena, the vampire who created Bill. It's clear to Eric that some connection remains between Lorena and her progeny, a connection he hopes will distract Bill enough for Sookie to be pried away. Lorena, skeptical but willing to play along, flashes back to her previous life with Bill ... In 1920s Chicago, the pair of them cavort with a rich couple who are throwing a party at their home. Posing as French socialites, Bill plays the piano as Lorena woos the pair, alluding to the fun the four of them could have once the rest of the guests retire for the night. Bill finishes his song to much applause, struts over to the young woman and kisses her hand, sealing the deal.

Upstairs at the hotel, Bill and Sookie lounge in bed but are interrupted by a visit from Isabel and a human named Hugo, whom she introduces by saying, "He is mine." Hugo has volunteered to join Sookie in infiltrating the Fellowship of the Sun, a favor he's doing for Isabel out of love. Glad to have the backup, Bill and Sookie accept the offer.

Sam and Daphne recline naked on the pool table at Merlotte's, blissed out. Sam, tracing the lines of the scar on her back, asks how it happened. Daphne tells him she never got a clear look at whatever creature attacked her as she ran through the woods, but she'll never forget the pain of the wounds - or the sickness that followed for more than a week. Impressed by the woman's resilience, Sam says he's never met anyone like her, but she responds by asking if he's ever told anyone what he is. "You shouldn't be ashamed of what you are," she tells him.

At Sookie's house, Tara calls all over Louisiana to find a pump to fix the water heater, and Maryann's grousing over the cold shower. When she realizes she'll have to drive more than an hour to a shop in Ferriday to pick it up, Tara lays down a case for Eggs to go with her, slyly rescuing him from Maryann's foul mood.

As Jason and Luke wait for the Newlins to meet them outside the church, they wonder why they've been summoned ... and Jason worries that he has a pretty good idea. But when Sarah and Steve arrive, it's clear that the two recruits are being given a Christian opportunity: To build a wooden platform on which a vampire will "meet the sun." Relived that his adulterous bath remains a secret, Jason still notes the cold reaction he gets from Sarah.

As Sookie and Hugo prepare to leave the hotel, they talk about what it's like to date a vampire. Hugo says he and Isabel have been together about a year, and lately they've been arguing about his desire to be turned into a vampire. Sookie is initially shocked by the idea, but when Hugo brings up the realities of aging alongside an unchanging companion, she's confronted with an ugly future she hadn't considered.

At Merlotte's, Sam and his staff set up for the evening rush. Arlene flirts with Terry, Maxine Fortenberry gossips with her girlfriend, and Andy shows up looking for Lafayette. When the suspended detective finds him in the kitchen, he interrogates the cook about his whereabouts over the past few weeks. But Andy pushes too hard, and Lafayette - still traumatized by his near-death experience - collapses under the stress. Terry, knowing PTSD when he sees it, chases Andy away and talks his coworker down. Out in the dining room, similar fireworks are going off between Hoyt and Maxine, who's deactivated her son's cell phone so he can't talk to Jessica. Furious, Hoyt tells her to stay out of his business and adds, "The reason she calls me at night is ... she's a vampire."

Jason and Luke make some progress with their carpentry, but Jason's guilt over his tryst with Sarah is eating at him. Luke senses something's bothering Jason, but he assumes it's just run-of-the-mill fornication - not full-on adultery with the minister's wife. As Jason mulls over celibacy as a solution, Luke assures him that repentance is possible: "God is an open-minded guy," he says, "to a point."

Sookie and Hugo pull up to the church - unknowingly driving right past Jason - and Sarah welcomes them with open arms. Nervous, Sookie becomes immediately talkative, spilling details about her "fiancé" Hugo and how they're looking for a church to marry them, a church that doesn't sympathize with vampires. Sarah takes them inside to meet Steve; Sookie's plan seems to be moving along perfectly.

At Hotel Carmilla, Lorena relaxes in her lightless room, a hand stroking the necklace she's wearing. She's flashes back to the old days with Bill ... In the bedroom of the rich couple they charmed, everything is slick with blood. Lorena braces the horrified man against a chair, snapping his neck as Bill sinks his fangs into the woman. When Lorena walks over to the bed, Bill gives her the dying woman's necklace, and the two of them have sex as their victim gurgles beside them.

The Newlins insist on giving Sookie a tour of the church, but as they work their way through the building, she starts to hear sinister thoughts leaking from Steve and panicky worries escaping Sarah . It turns out the Newlins know who she is and why she's there. Backpedaling and hoping to avoid a visit to Theodore Newlin's underground tomb, Sookie attempts every excuse for leaving. But soon Gabe shows up to help with "the tour," and when she refuses to go downstairs, he drags her into the basement. Sarah looks on, aghast and unable to believe her husband is capable of this.

Back at Hotel Carmilla, Bill senses that something is wrong with Sookie, but Lorena has appeared in his room and refuses to let him go. As his maker, she still has power over him - and she uses it to kiss him deeply.

Lafayette stocks the walk-in at Merlotte's, where he's horrified to see Pam appear, holding a bottle of vampire blood she expects him to sell. He tries to resist her demands, but it's no use; he accepts the drug with no clue why she and Eric are forcing him to do this.

Andy drives down a Bon Temps road at night, when suddenly a pig and a dog leap out in front of his sister's old Mercedes. Recognizing the pig from Maryann's house, he jumps out of the car and chases it into the woods, but both animals evade him. After Sam and Daphne shift back to their human forms, Sam says he was surprised to see her turn into a pig and mentions that Andy seemed to recognize her. Daphne says the pig is her "go-to shift," but she laughs off the idea that Andy would know her animal form.

At Hotel Carmilla, Jessica gets a surprise when Hoyt arrives with flowers, apologizing profusely for what his mother did. Overcome with joy, she drags him into the room.

Jason walks into the darkened church, looking for the Newlins, and he finds Sarah weeping on a balcony. She tells him between sobs that, though she always knew she was meant to be with a great man, she now knows that Steve Newlin isn't that man - Jason is. The two of them are meant to be together, she tells him, as she reaches for his belt.