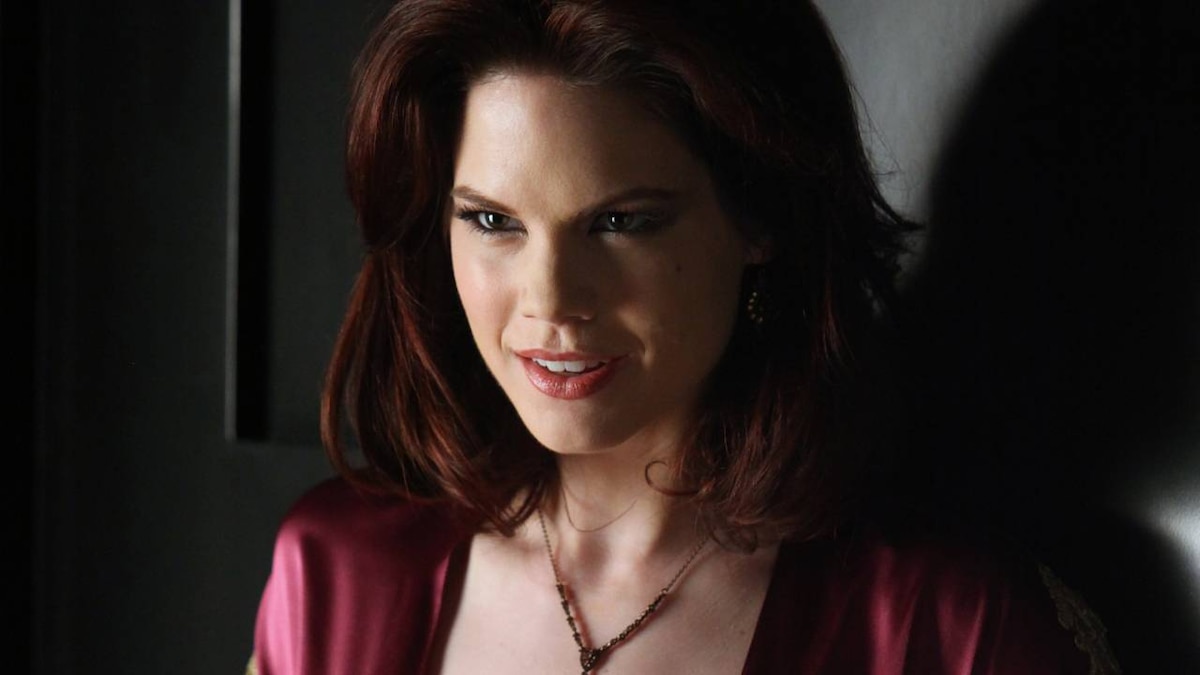 A drunken Andy Bellefleur stumbles through the woods, still searching for the pig that crossed the road in front of his car. As he tries to get his bearings, he notices drums and strange noises drifting through the trees. He finds their source - the people of Bon Temps, naked and wild, chanting as Maryann prepares to cut out Sam's heart as a sacrifice. Andy fires a gunshot in the air, accidentally providing Sam with enough of a distraction to shift into an owl and escape, but when the detective grabs Terry to get his attention, the veteran twists Andy's arm violently, breaking it with an awful crack. Andy lays on the ground in agony, gazing up into his cousin's black eyes.

In the basement of the Fellowship of the Sun church, Sookie attempts to talk Hugo through an attack of claustrophobia while trying to piece together who could have betrayed them. The Newlins knew they were coming ... could Stan be setting them up and eliminating Godric as some sort of power grab?

Lorena continues to hold Bill captive in his own hotel room. She's older and more powerful, and it's impossible for him to escape. Lorena flashes back to the last standoff they had - more than 70 years ago. Returning from a musical, she brings a souvenir home for Bill: a pretty young chorus girl. Tempted as he is to feed, Bill can't continue this violent existence, torturing humans for sport. Lorena at first laughs at him, then softens, promising he'll outgrow this sensitivity. But Bill pushes back, saying he refuses to be the monster she's turned him into. Present-day in the hotel, Bill assures Lorena that if Sookie is hurt he'll drive a stake into "whatever semblance of a heart you have left."

Eric and Isabel lurk outside the Fellowship church, discussing their options and laughing at the humans' feeble preparations for war. Eric asks Isabel why she'd get involved with a human like Hugo, and she responds that their short lives enable them to feel things much more strongly. She finds it curious, "like a science project."

Inside the church, Jason and Sarah lay semi-dressed on the balcony. Sarah, weeping with joy, says she's finally found the man that God intends her to be with. She wants to tell Steve immediately (breaking her marriage vows doesn't give her the excuse to then lie about it), but Jason talks her into waiting, at least until the lock-in and morning ceremony have ended.

Jessica and Hoyt relax in their hotel room, and when Jessica admits that she's a virgin, Hoyt tells her that he is, too. She says she wants to be his first ... but not tonight. It's time for her to go to sleep before dawn. Stripping to her underwear, she climbs under the covers and cuddles with him.

Eric and Isabel return to the hotel, where Stan again makes the case for a full-scale attack on the Fellowship. Eric has had it with this foolishness, but after seeing the ragtag enemy for himself, he can't imagine them holding Godric for weeks. The only conclusion he can draw is that his maker has been destroyed.

Steve comes downstairs to visit Sookie and Hugo. He tries to charm them, promising to let them go free if they'll answer some questions. Sookie refuses, but Hugo blurts out both their names and their mission. Steve, immediately recognizing the Stackhouse name, rushes out to find Jason while Sookie makes a last-ditch attempt to call for help. She reaches out with her mind, hoping to send a silent message to Barry, the telepathic bellhop.

Bill and Lorena lay in the hotel, weakening physically as they enter the daylight hours without sleep. Bill begs her to let him at least send help to Sookie ... Eric perhaps. Lorena laughs, telling him that Eric is the reason she's there to begin with. "He wants the girl," she tells Bill. "Just let him have her."

Steve, driving an SUV, finds Jason with his bags packed, walking off of the compound. Convinced that Jason's in league with the vampires, Steve orders Gabe to take care of him, so the burly drill instructor pulls a knife and drags Jason into the vehicle.

Eggs and Tara wake up on the couch at Sookie's house with no idea of how they got there and assume they must have blacked out from the joint they smoked. The appearance of Maryann, who's wearing a dress and covered in blood from a rabbit she killed for dinner, does little to settle their worries.

On the dock at the lake, Sam finds Daphne ... and levels a gun at her. Crushed and furious, Sam says he trusted her more than anyone he's ever known. But the girl is a heart-and-soul follower of Maryann, who Daphne says has the power to control humans but not supernatural creatures. Maryann is a maenad, she explains, the closest thing to God that humans will ever see. She channels violence, lust, excess ... and she cannot be destroyed. Confused and more worried than ever, Sam walks away.

Hugo's anxiety continues to build in the Fellowship basement, and as he get agitated, Sookie can hear his thoughts more clearly ... he's the traitor! She confronts him, and he admits the truth - that after Isabel refused to turn him, he realized she'd never let him be her equal. Vampires only care about their own kind, Hugo tells Sookie, which is why he joined the Fellowship.

In the woods, Gabe holds the knife against Jason, who pleads with him, saying there's been some kind of mistake. But when his captor mentions Sookie, Jason spins around knocks the knife from Gabe's hand, takes him to the ground and then knocks him out with a fierce blow to the head. Jason runs back to the road, heading toward camp as it gets dark. He initially runs from the headlights of an oncoming SUV, but when Sarah calls to him from behind the wheel, he stops, relieved to see her. But before he can tell her what happened, she raises a gun and shoots him.

As a crowd gathers at Merlotte's, Lafayette places calls from the ladies' room, trying to move the V that Pam tasked him with. Tara and Arlene come in, and Arlene tells Tara that she's worried that she and Terry blacked out and had sex, which is a bit too much of a coincidence for Tara's taste. Out in the barroom, Andy bursts through the door, shouting at the crowd of "devil zombies" that they won't get away with what they did last night. Everyone laughs him off - except Tara and Sam.

At the lake, Daphne stands on the dock, as if waiting for someone. When Maryann and Eggs appear, she greets her master with absolute adoration. Maryann kisses her disciple softly on the lips before Eggs, his eyes glassy and black, plunges the ceremonial dagger into Daphne's chest.

At Hotel Carmilla, Bill and Lorena flash back again to their past. Holding a stake against his heart, Bill threatens to destroy himself unless Lorena sets him free from the control she has as his maker. Weeping blood, she complies. Back in the present, she explains to Bill that she's trying to help him by separating him from Sookie. A knock at the door interrupts them. It's Barry, with the message from Sookie, and though he tries to deliver it from outside the room, the door swings open and he's dragged inside.

Gabe returns to the church basement, battered and filled with rage. Hugo says that Sookie knows she's been betrayed and begs Gabe release him, but the thug responds by punching Hugo in the face and then kicking him into unconsciousness. His plans for Sookie are even more sinister. Ripping the front of her dress open, he forces himself on her. She screams, scraping at his face with her nails as he unbuckles his belt. Suddenly Gabe is torn off of her, and when Sookie looks up, she sees him suspended in mid-air, trapped in the grip of a tattooed, 15-year-old boy. Traumatized, Sookie asks, "Godric?"