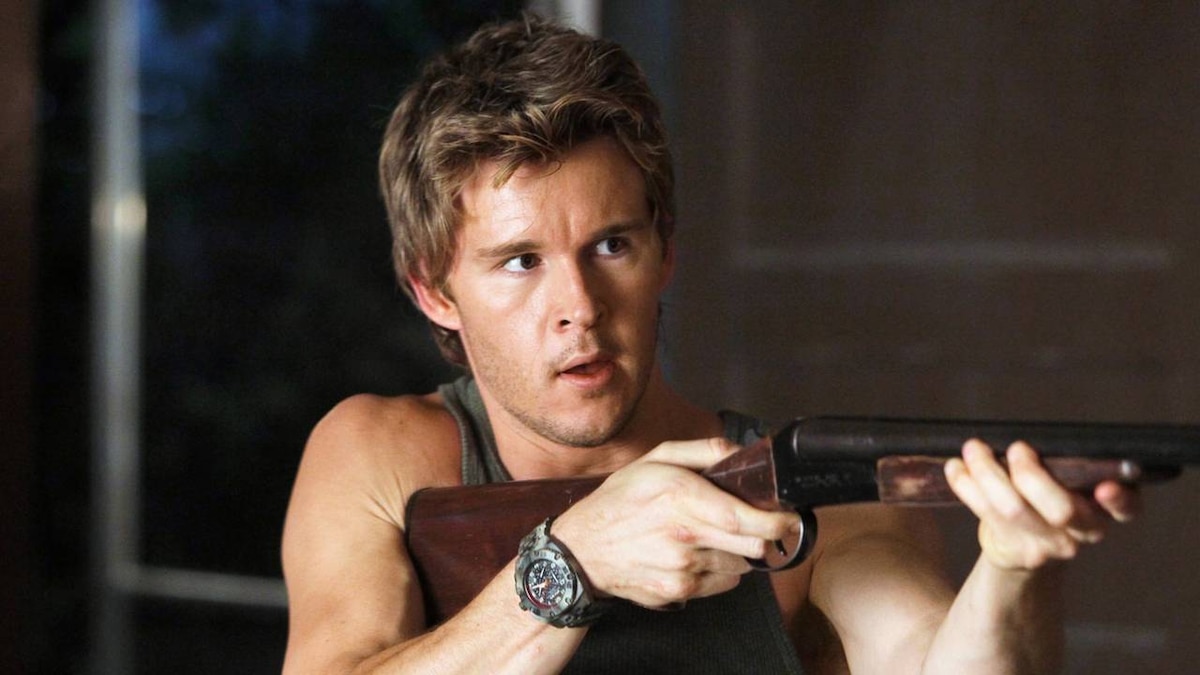 Eric flies (literally) into Fangtasia and warns Pam that they need to seek sanctuary immediately - it won't be long before Russell comes after him for killing Talbot. Before they can flee, however, Nan Flanagan raids the bar with a squad of vampire storm troopers, looking for answers regarding the Magister's disappearance. Furious that she's losing precious lobbying time, Nan orders Eric to make a statement - live via satellite - to the vampire "Authority." Playing his last card, he comes clean about Russell's murdering the Magister, revealing the ancient vampire's slaughter of his family and ages-old quest for world domination.

Bill and Sookie shower together, washing blood (his, hers, their enemies') down the drain. After getting dressed, Sookie realizes what a mess the house is and once again finds herself disposing of a werewolf corpse.

Jason comes home to find Felton, who's convinced that Jason kidnapped Crystal. But when Felton turns on Jason, Crystal knocks him out with a blow to the head and tells Jason to tie him up. They drive her unconcious half-brother out into the country, plant vampire blood on him and call the police with an anonymous tip.

Tara, overcome by her ordeal, has a drink with Sam in his trailer and is almost ready to open up a bit when the phone rings. It's Terry with a noise complaint about the neighbors: Tommy and a woman he's having extremely loud sex with. Sam drives over to talk to his brother, but Tommy just laughs him off and mockingly agrees to "keep it down, sir." Sam leaves, furious but managing to keep his cool.

Jesus spends the night with Lafayette, and both men wake up in a great mood. Even Ruby Jean seems to be relatively even-keeled as she gets ready to return to the mental hospital with Jesus.

Jason and Crystal go to the sheriff's office, where they find out that Kevin, the officer who responded to pick up Felton, is in the hospital after being beaten nearly to death. Jason follows Andy into his office and suggests that they raid Hotshot and take down the whole V- and meth-selling operation. In the waiting area, T-Dub is led out from his cell and sees Crystal.

Sookie receives a call from Hadley, who begs her to meet up at the aquarium. When Sookie arrives, she finds that Hadley has taken her son Hunter out of daycare. Hadley admits that she's the one who told the queen about Sookie's powers and begs her cousin to forgive her...and then asks Sookie to find out whether Hunter has powers too. Sookie sits next to the young boy and has a brief mental conversation with him. She nods at Hadley, who bursts into tears and drags her son away to find somewhere safe she can hide him from the queen.

At Merlotte's Arlene accuses Tommy of stealing her tips, and when he yells at her, she retreats to Sam's office to cry. Holly comes in to check on her, and Arlene reveals that Terry isn't the father of her baby...and that she wishes she weren't having it. Out in the dining room, Lafayette serves Jesus dinner while Hoyt tells Jessica how much he misses her.

After having had so much of Sookie's blood, Bill has a vivid dream about Claudine and her strange world. At first she runs from the vampire, but Bill convinces her that he's trying to protect Sookie. In order to do that, he tells Claudine, he must know what Sookie really is. With trepidation, Claudine tells him. Bill wakes up, and heads to Sookie's house to tell her.

At Fangtasia, Russell (holding the remains of Talbot in a bottle) watches from the roof as Nan returns to deliver the Authority's ruling on Eric. She tells the Nordic vampire that the official stance is that the investigation never happened. The Authority expects Eric to eliminate Russell - with no further support - and make sure that none of this ever comes to light.

Calvin bullies his way into Merlotte's, and when he finds Crystal there with Jason, he starts in on Sam, who loses his temper. Shattering a glass over Calvin's head, Sam beats him savagely, punching him in the face over and over until Jason and Hoyt have to pull him off. Jesus and Lafayette load Calvin into a truck to drive him to the hospital. Crystal jumps in with them, and when Jason tries to stop her, she balks and then rides away with her critically injured father.

In the parking lot of Merlotte's, Tara watches the truck drive off and is horrified when Franklin appears and grabs her. He's enraged that someone he "loved" would try to kill him, but Tara is finished playing his games. "If you're gonna f***kin' kill me, then kill me," she tells him. "What's taking you so long?" But before Franklin can go through with it, Jason arrives and blasts the vampire through the chest with a wooden bullet, reducing Franklin to a pool of blood.

Nan rides to the airport, watching the news in her limousine, when Russell appears onscreen and murders the anchor. Turning to the camera, he tells the American public that vampires are really like him, that they want to eat humans - and their children. He asks: "Why would we seek equal rights? You are not our equals."