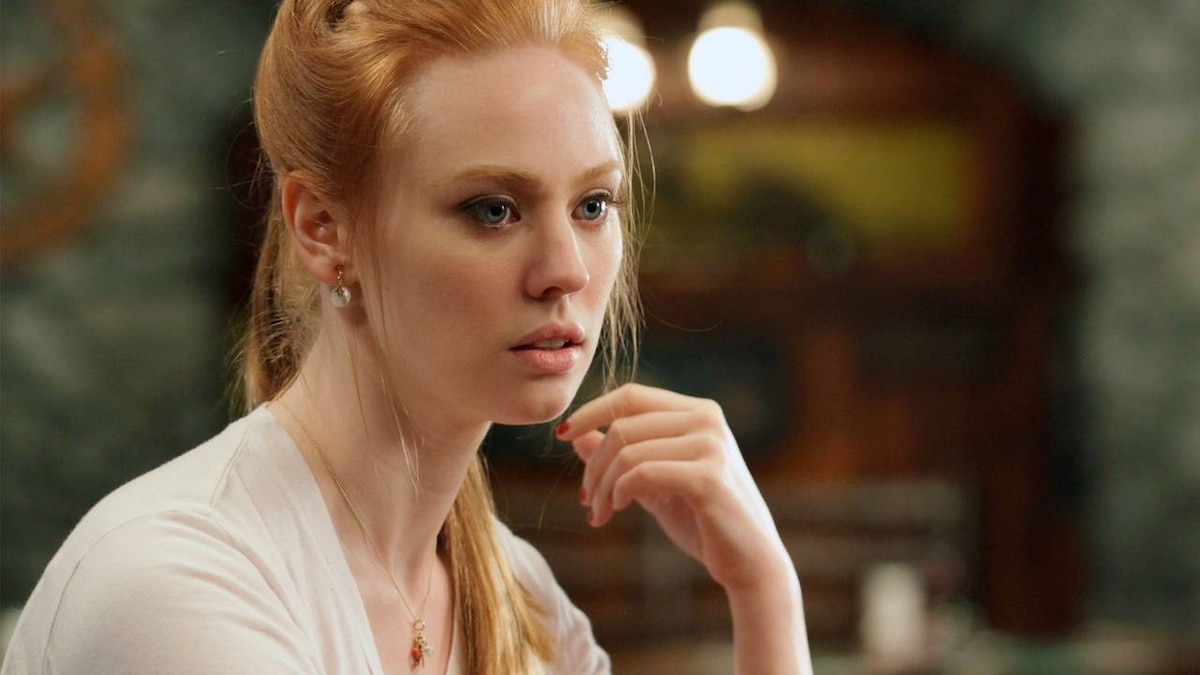 I Got a Right to Sing the Blues

Sookie and Bill are dragged back to Russell's mansion by the king's goons. Bill tries to escape by staking one of the guards – and taking a shot at Russell – but the older vampire is much too powerful for him. Russell demands that Bill be locked up in the slave quarters and then orders Lorena to kill him. Aghast, Sookie begs Eric to tell her what's going on, but the Nordic vampire tells her to keep her mouth shut. He cares nothing for her, he says, and warns her to stay out of his way.

Russell joins Sookie in his office and puts on a façade of pleasantness as he asks her what she is exactly – because she's certainly not human. Sookie wants some answers of her own (and Russell is playful enough to indulge her), but when she finds out that Russell is the king of Mississippi and that there's also a queen out there somewhere, the information only confuses her more. Russell quickly tires of playing games, and when Sookie dodges his question about having other powers, he loses his temper, screaming in German and commanding her to answer.

The crew at Merlotte's is ready to close up when a lone customer named Peach walks in and wants to eat. Lafayette leaves Jesus at the pool table and heads into the kitchen to cook her meal, but when Arlene confides in Jessica that all her customers stiffed her (because the vampire glamoured them as they arrived), Jessica takes pity and glamours Peach as well. Not only does Merlotte's last customer of the night leave Arlene a massive tip, but she also allows Jessica to feed on her in the ladies room.

Outside in the woods, Jason and Crystal make out passionately, not sure where the intensity is coming from. But Crystal breaks away from him, upset, and says that they can never be together. "Just forget me," she tells him before running off, "for both our sakes." Later, he finds out why she was so cagey when she shows up at her house with flowers, only to find out that Felton is her fiancé.

Jesus sits with Lafayette in his car, and they talk, opening up to each other. When Jesus reveals to Lafayette that he doesn't know his father because his mother was raped, the cook/dealer softens. Nervous, but genuinely connecting, the men lean in for a kiss.

In the slave quarters at Russell's mansion, Lorena has Bill chained to the floor and tortures him with silver blades. As she carves a deep incision into his chest, Bill tells her that he refuses to become what she is – a heartless monster. He knows that Lorena's maker stamped out her humanity by forcing her to do unspeakable things … and Bill says he wishes he could have met her before that happened.

Tara, tied to Franklin's bed, puts aside her terror and tries to earn his trust, kissing him and begging to drink his blood. Franklin is turned on, and when Tara asks him to untie her, he obliges. Tara bites into his neck, drinking deeply. Later, when she realizes Sookie is being held in a nearby room, Tara sends a mental message to her friend, telling her to be ready for an escape attempt.

Downstairs, Eric plays cards with Talbot, doing his best to charm Russell's partner until the man of the house himself asks Eric to go for a drive with him. In the car, Russell explains how he uses werewolves to do his bidding and tells Eric that he plans to employ their help in sublimating the human race entirely.

Jesus takes in the décor in Lafayette's living room, telling his date that he takes the religious symbols seriously. As their conversation starts to get more intimate, they hear a crash outside, where Felton and his crew are smashing Lafayette's car. Lafayette and Jesus fight them off, but the savage beating Lafayette gives Felton – along with the revelation that Lafayette is a V dealer – drives Jesus away in disgust.

Eric's assumption that Russell is taking him to Shreveport to deal with the magister turns out to be incorrect. Instead, the king drives to Sophie's estate, where they kill some of her guards and corner the queen. She tries to fight her way past Eric, but he's older and more powerful and has decided he no longer needs to defer to her. Russell proposes marriage to Sophie – and more importantly offers to pay her debts – and she begrudgingly accepts. Not that the vampires are willing to take her at her word; before going to ground, Eric makes sure Sophie is "properly restrained."

Lorena stays up past sunrise to continue her work slicing into Bill, whose blood pools increasingly beneath him. She's covered in blood herself, from Bill, from weeping, from the bleeds … and when Coot and Debbie stumble in, they can barely handle the sight of all that V. Feeling generous, Lorena allows them to drink directly from Bill's wounds.

Tommy sits in front of the TV in his brother's trailer while Sam tries to get to the bottom of whatever's going on between him and Joe Lee. Tommy seems like he's about to talk when Melinda shows up at the door and asks to talk to her "youngest" alone. Once Sam's gone, Melinda's demeanor shifts and she scolds Tommy for disobeying his father. Sam doesn't care about any of them, she says, and there's no way he'll stick by the family once he finds out the truth about them.

Sam turns up at Merlotte's to find a depressed Lafayette, but when Tommy never shows up for work, he starts to get suspicious of the reasons behind Melinda's visit. Arlene mentions that she saw his parents leave the house with "some killer dog," and Sam immediately calls Andy, who tells Sam that there's some dog-fighting going on outside of town. Sam jumps in his truck and races off.

While Franklin sleeps at Russell's mansion, Tara sneaks out of bed, pulls a medieval weapon from the wall and bashes in the vampire's skull. She then runs to free Sookie, who insists on looking for Bill. As Tara sneaks across the grounds, she's terrified to run into a werewolf, but it turns out to be Alcide, who's come to help. Sookie manages to find Bill, drained to the point of death, but before she can take him to safety, Lorena leaps on Sookie and bites into her throat.