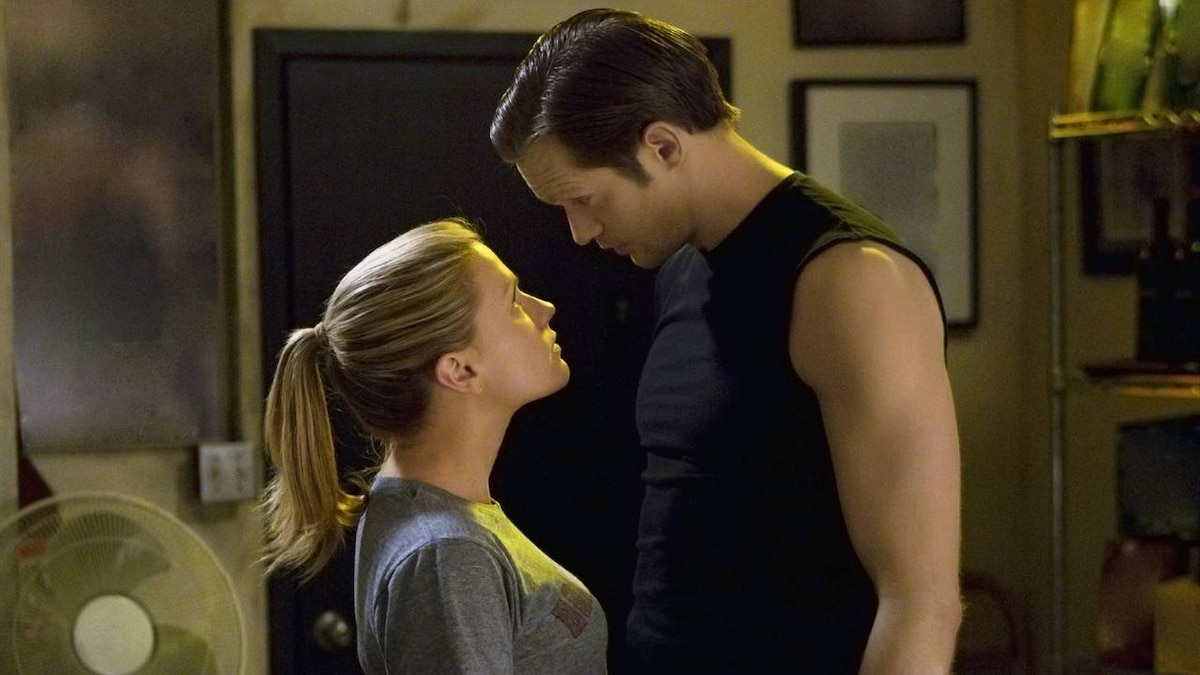 I Smell a Rat

When Bill explains to Sookie that she's a faerie, her reaction is immediate and to the point: "How f**king LAME!" But after he recounts his conversation with Claudine, Bill gets a more serious reaction from Sookie as he explains that faerie blood is intoxicating to vampires. He swears that his love for her has nothing to do with the taste of her blood, and she believes him...as much as she's able.

In the parking lot at Merlotte's Tara and Jason clean up what remains of Franklin, while Jesus, Lafayette and Crystal race to the hospital with a dying Calvin in tow. Realizing he's not going to make it, Lafayette stops at his own house and administers V to Calvin. The man's lethal wounds immediately heal, but he regains conciousness enraged that they fed him "vamper juice." Stalking off as Crystal follows, he disowns his daughter and tells her she should have stuck with her own kind and married Felton like she was supposed to.

Sam drinks alone in his trailer, thinking back to the man he was before moving to Bon Temps. He and a woman named Charlene were jewelry thieves until she double-crossed him with her boyfriend, Jon. As he continues drinking, Sam re-lives the rest of his memory, tracking the couple who cheated him into the woods and killing them in cold blood. Holding a bottle of whiskey as tears run down his face, he comes out of his reverie next to their makeshift graves.

At Fangtasia, Eric goes over his will with a lawyer, bequeathing everything to Pam, who watches with growing concern. Eric assures her that Russell will destroy him for murdering Talbot, and as he watches Yvetta sign the will as witness, Pam walks away.

Bill watches television at Sookie's as Nan Flanagan tries to perform damage control after Russell's murder of a national news anchor. Bill is interrupted by the arrival of Eric, who says that he also knows what Sookie is - and that Bill is keeping a secret from her. Sookie interrupts their conversation, and before he flies off, Eric tells her that he doesn't expect to be around much longer.

At Jason's house, Tara finally opens up to Sookie about what Franklin did to her. Sookie does her best to support her friend, while outside Bill instructs Jason to keep Sookie safe from the werewolves that are undoubtedly coming for her. Later, Tara thanks Jason for being such a good friend, and when they briefly kiss, Jason can't take the guilt anymore and admits that he killed Eggs. Struck speechless, Tara walks out.

At Lafayette's house, Jesus says he wants to try V - that he believes it is magic. The two of them take doses and trip their way through time, where they watch their ancestors perform rites and witchcraft to benefit people. At the end, however, they wake up startled by the image of Jesus's evil grandfather performing black magic.

Outside of Merlotte's, Arlene comes clean to Terry, telling him that the baby is Rene's and that it will grow to be evil. She's afraid he'll bail, but Terry embraces her and tells her that he'll raise the child as his own, surrounding it with as much love as he possibly can. Nevertheless, Arlene later approaches Holly the Wiccan waitress about ways to end her pregnancy.

Sookie dreams about Eric and realizes that she knows deep down that she can't trust Bill. She goes to Fangtasia to talk with the vampire, who cryptically says goodbye and then kisses her passionately. He leaves her in the office to talk with Pam, who beseeches him to find some way to use Sookie as bait to defeat Russell.

The vampire king works out his final stages of grief over Talbot by paying a male hooker who looks much like his deceased partner. Russell tells "Talbot" how much he loves him and that he's so sorry he wasn't with him when he died. As the hooker gets more and more freaked out, Russell begins to weep and then stakes the man through his chest.

Hoyt comes into Merlotte's and tells Jessica that he loves her for exactly what she is - and that he's broken up with Summer to be with her. Tommy looks on from across the bar as Hoyt waits for an answer. But a conflicted Jessica stays silent for a bit too long and Hoyt storms out. When Tommy gets in his face in the parking lot, Hoyt throws a single punch and drops him without slowing down. Tommy then shifts into a pit bull and mauls Hoyt, whose screams attract Jessica. She throws the dog far into the woods, and tells Hoyt, "I love you too - now drink my blood."

Bill wakes up to find that Sookie has left and yells at Jason for failing to keep her safe. Fed up with letting everyone down, Jason shoots back that no one can stop Sookie from doing anything and rescinds his invitation, forcing the vampire to leave. Jason then hears a noise in the bedroom, and when he investigates, finds a black panther sitting on his floor...until it shifts into Crystal.

At Fangtasia, Eric rejoins Sookie in his office. She yells at him for locking the door and tells him that she's not some kind of prisoner. "That's exactly what you are," he says as he scoops her up and takes her to the basement to be thrown in chains.