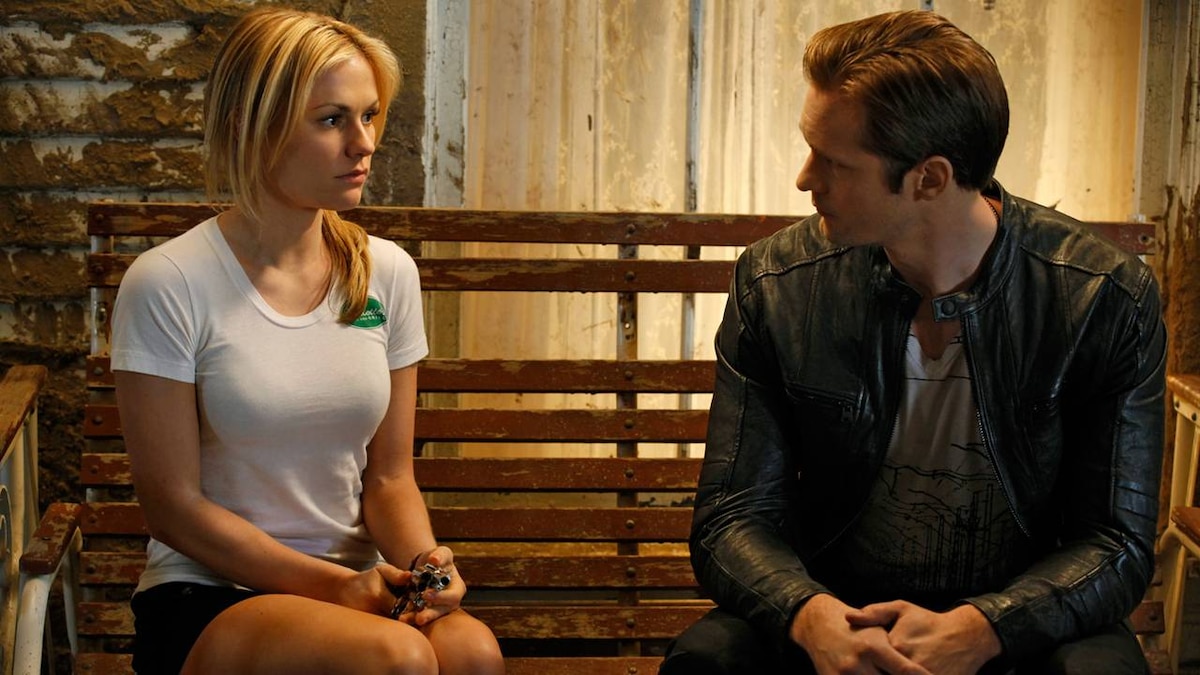 In the Mississippi woods, Bill Compton spits out the furry ear of a werewolf into the dirt. He is surrounded by the dead bodies of several other werewolves, and as his now ear-less attacker writhes on the ground in agony, the pack leader, Coot, advances on Bill. Before the battle can continue, though, a vampire rides up on a horse. He introduces himself as Russell Edgington, the King of Mississippi, and apologizes to Bill for the rough treatment he's received. Inviting Bill onto his horse, Russell gallops off toward his mansion, where his partner Talbot makes a show of welcoming Bill as an honored guest - even though his "room" features a solid silver door and a massive vampire guard.

Sookie visits Eric at Fangtasia, all but begging for help finding Bill. When she shows Eric the Operation Werewolf brand she discovered, the vampire flashes back to WWII, where he and Godric - disguised as SS members - captured a werewolf with the same marking. He doesn't share this detail with Sookie, who returns home, upset. Entering the house, she's frightened to hear noises, but it turns out to be Jason, whose guilt-ridden conscience kept him awake until he decided to start cleaning up the mess Maryann left behind. Sookie explains how upset Tara is about Eggs and starts to blame herself for his death, but Jason - all too familiar with that feeling - assures Sookie it wasn't her fault.

In Lafayette's bathroom, Tara struggles with him as he forces her to throw up the handful of pills she's taken. He drags her out of the house and gets in the car to go to the hospital. Lettie Mae wants to come along, but Lafayette barks at her, "You've failed this girl for the last time, you hear me?" In the car, Tara begs him to not take her to the hospital; she's afraid they'll lock her up for life after hearing her story. Lafayette knows she's right, but he's furious that she'd try to kill herself and leave him alone. Part condemnation and part pep talk, he tells her that she has the strength to deal with her problems - and he has something he wants to show her.

Hoyt tries to bring a six-pack of True Blood to Jessica as a gift, but the young vampire is way too freaked out over killing Hank to talk to him. He says he understands how she must have felt when she attacked Maxine, and he forgives her...but Jessica knows he can never know how she feels.

Sam wakes up in his truck with a shotgun to his head. His brother, Tommy, has found him sleeping outside the Mickens' home and herds Sam inside the unkempt house. But when Sam explains himself to his parents, Joe Lee and Melinda, the strange family is reunited. Tommy is not thrilled to find out he has a big brother, however, and walks out. Sam follows him, trying to explain that he's not there to cause trouble. Seeming to put the conflict behind them, the men shift into dogs (Tommy chooses a pit bull) and go for a run to clear their heads. As night falls though, Tommy purposely leads Sam into the path of an oncoming truck before shifting into a bird and flying away, leaving his brother shaken up on the side of the road.

Lafayette and Tara arrive at a psychiatric hospital, and just when Tara starts to think he's betrayed her and decided to have her committed, Lafayette leads her to his mother, Ruby Jean, who he checked into the facility. She verbally abuses her nurse Jesus, and Lafayette, who after the visit points out to Tara that there's darkness in their family - but that doesn't mean they have to give in to it.

Sookie arrives for work at Merlotte's, but as she approaches the door, the threatening thoughts of a dangerous-looking biker enter her mind. Before he has a chance to attack her, Terry appears. When they search the area for the man, all they find are discarded motorcycle boots and some wolf tracks. As a precaution, Terry gives Sookie a handgun.

Outside the police station, a crowd of reporters peppers Andy with questions about his "heroic" shooting of Eggs. He dodges the attention as best he can, and when Jason shows up, hustles the real killer away before he can incriminate them both. They go to Merlotte's, where the townspeople applaud Andy when his story comes on TV, but Jason - getting drunk - is a little envious of Andy's sudden fame. When they leave the bar, Andy insists on driving Jason home, but a police call to bust a meth lab waylays them. At the scene, Jason catches a glimpse of a beautiful woman before he manages to tackle an escaping drug dealer.

Bill dines with Russell and Talbot, and as strange blood delicacies are brought to the table, Russell offers Bill a job as sheriff in Mississippi - and asks for his help convincing Sophie-Anne to marry him and merge their kingdoms. Russell intimates that he knows about Sookie and believes that Bill is carrying out some kind of secret work for the queen in Bon Temps. Bill's not sure how Russell came by this information, but he quickly learns when Lorena enters the room. Bill hurls a lit oil lamp at her, lighting her up like a torch.

Tara drinks alone at Merlotte's, until she's joined by a mysterious vampire named Franklin Mott - who earlier that night broke into the Compton house. The two share a drink, and later, when Tara leaves the bar, he comes to her aid as two drunk rednecks accost her.

Eric visits Sookie at home and tells her his story of werewolf-hunting with Godric during WWII...They were searching for a pack of vampire-led wolves. He tries to downplay the possibility that he's telling Sookie all this because he cares about her, and before she can press him on having actual emotions, he rushes her inside as a wolf attacks them.