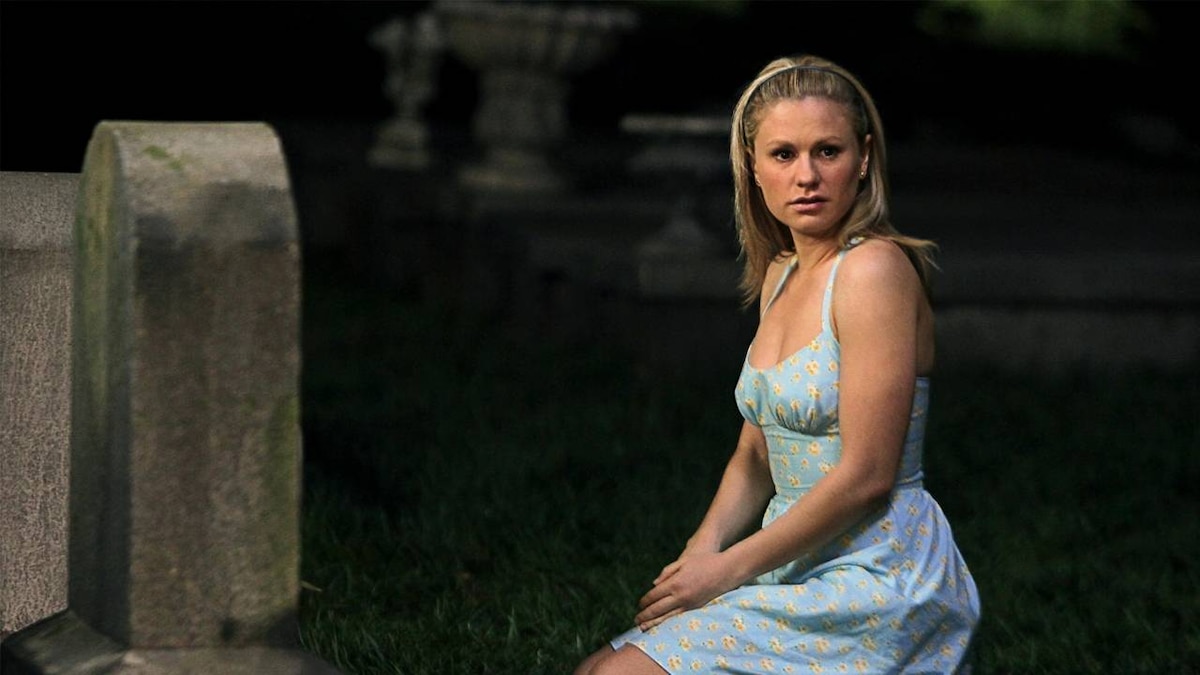 Evil Is Going On

Eric and Russell smolder in the sunlight outside of Fangtasia, and as Eric finally receives his revenge, the apparition of Godric appears and tells Eric to forgive Russell...Not likely to happen. Still, Russell and Eric both receive a stay of execution when Sookie - healed by Bill's blood - bursts out into the sunlight to rescue them. She allows Eric to drink from her and heal his wounds, but a badly charred Russell is chained to the stripper pole with silver as Sookie stands guard through the day.

Sam and Tara wake up in his trailer, and as he cooks her breakfast, he teases that his is the only time she's stuck around till morning. When he tells her that he's a shifter, she's immediately freaked out, but Sam refuses to hide what he is any longer. Overcome by everything she's been through, Tara wishes she could just "reboot," and Sam tells her it's possible - as long as she keeps moving. Later at night, Tara does just that, driving away from Bon Temps.

Hoyt shows up to work and finds his mother, Summer and his old high school guidance counselor waiting for him. They try to stage an intervention to protect him from Jessica, but Hoyt is having none of it. He tells them that he loves Jessica and that they'll just have to deal with it. Later that night, he takes his girlfriend to an apartment he's rented and tells her that he wants to marry her - even if he has to become ordained as minister and do it himself. Maxine, enraged and aggrieved, buys a gun...

Jason rushes into the sheriff's office as the DEA mounts up for a raid on Hotshot. Andy tries to talk him out of tipping off the dealers, but Jason and Crystal rush over and tell Calvin that the police are on their way. As Calvin orders everyone to destroy the vampire blood and hide the meth supplies, Felton shows up, strung out on V, and shoots his father to get to the drug. Felton forces Crystal into his truck, and she begs Jason to take care of the people in Hotshot, who can't look after themselves. Jason swears that he'll find her, and as Felton drives off, he turns to the people he's been charged with protecting.

Lafayette continues to hallucinate, becoming more and more afraid that he's going crazy like his mother. He calls Jesus for help, and when the nurse arrives at Merlotte's, he tells Lafayette that everything's going to be fine - he's just become more sensitive to magic. And when Jesus explains that he's a witch himself, Lafayette is worried enough that he's actually comforted by the news.

As the other vampires sleep through the day, Russell tries to convince Sookie to set him free, offering everything from money to murder. Sookie doesn't take the bait, though, and when she realizes that he's been hoping to use her blood to resurrect Talbot, she dumps the bottle of vampire remains down the bar sink. As the other vampires awaken, Alcide arrives at Fangtasia - Eric has promised to clear his father's debts if Alcide will let them bury Russell at one of his worksites.

Bill and Eric pour wet cement over the immobilized vampire king, and Eric explains that he couldn't risk killing Russell and allowing him to find peace in the afterlife. Godric appears again to try to convince Eric otherwise, but the Nordic vampire orders him away. As Russell disappears, Bill slaps a pair of silver cuffs on Eric and pushes him into another pit, filling it in as he calls one of Eric's assassins to kill Pam.

Sam stops by his rental property and finds that Tommy has taken off - and left the place a mess with water running and the fridge door hanging open. When he sees the place, Sam races back to Merlotte's and finds that Tommy has also looted his safe. Grabbing a handgun from his office, Sam manages to track Tommy down in the woods. His brother is distraught at being abandoned, but he refuses to give the money back. As Tommy walks off into the darkness, Sam raises his gun and fires.

Bill knocks at Sookie's door to tell her what he's done to Eric in order to protect her, and he promises to kill every vampire who knows what she is. But they are interrupted when Eric - covered in cement - swoops onto the porch. He tells Sookie that Bill originally came to Bon Temps at the queen's order to "procure" Sookie, and that Bill even allowed the Rattrays to beat her almost to death in order to give her his blood. Bill is unable to deny any of it, and Sookie rescinds her invitation, forcing the vampire out of her home. Bill goes back to his house, where the queen arrives to take delivery of Sookie, but Bill turns on her, attacking the much older vampire.

Sookie, weeping, visits her Gran's grave, where Claudine appears to her. The faerie asks Sookie to go away with her, and with very little to leave behind, Sookie agrees.