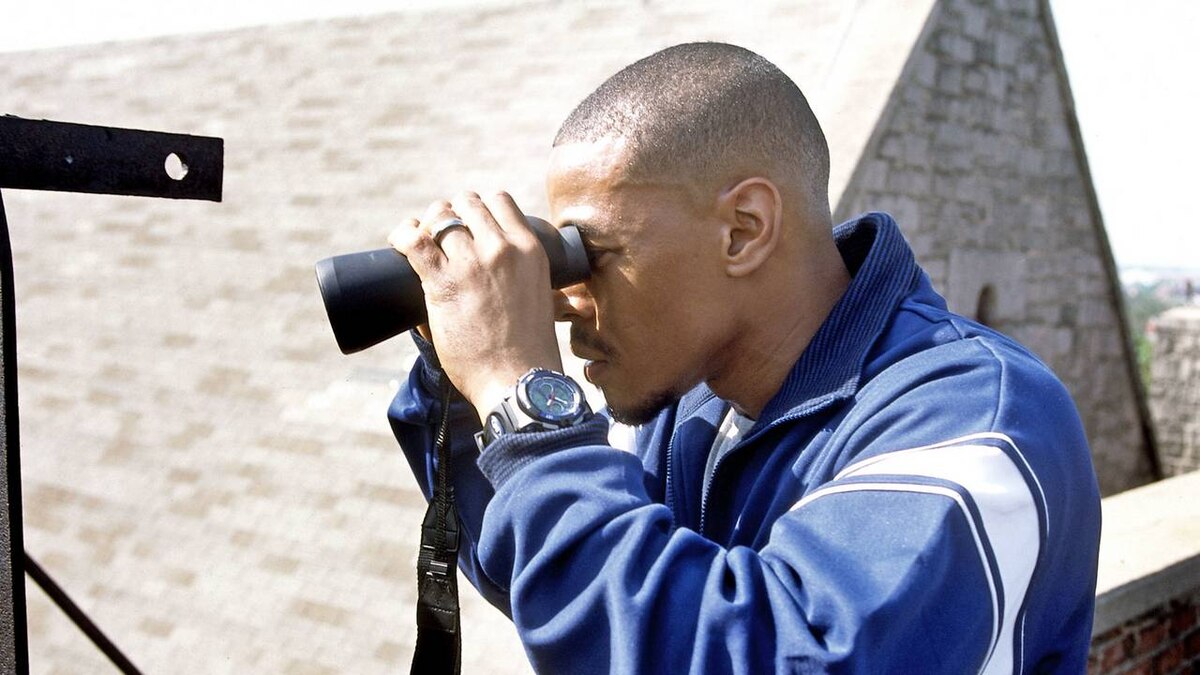 Prez, it turns out, has another unexpected gift: the ability to decipher the slurred, streetwise slang of the drug dealers. In the Detail Room, he's the undisputed champ of grasping the meaning of the wiretapped conversations, a talent he developed, he explains, from listening to the Rolling Stones' "Brown Sugar." "I used to put my head to the stereo speaker and play that record over and over."

The squad lays plans to bust the Barksdale crew as they re-up the stash which, they've learned from the wiretaps, Stinkum and a runner will be carrying the next morning. The plan is to get the stash without revealing their wiretap. The bust goes down precisely according to plan, with Stinkum getting away and the stash — four packages of street-ready heroin — captured. Stink goes to a pay phone to inform Stringer of what's happened, a conversation that is taped at the Detail Room.

In a meeting with Judge Phelan, McNulty lays out the progress of the Barksdale case in order to convince the Judge to extend the wiretap authorization for another 30 days. The Judge is surprised to learn that Daniels went up against Rawls to prevent the investigation from being blown. And he assures McNulty that he's a friend, if he has trouble with his bosses, which McNulty assures him he does.

At the behest of Bubbles, Greggs rescues Johnny from drug court so that he gets probation instead of jail time, as long as he attends Narcotics Anonymous meetings. At a NA meeting, Johnny is bored but Bubbles is affected by the speaker, a recovering addict named Walon, and indicates that he'd like to straighten out his life. Later, however, he gets high again.

When 'DAngelo visits Stringer and Avon at Orlando's, Stringer tells him he thinks 'DAngelo has a snitch on his crew. After 'DAngelo leaves, the Barksdale gang continues to mull over the bust and Stringer concludes: "Something is up; something is definitely up."

Later Stringer comes to the projects and makes procedural changes, ordering the project's pay phones destroyed and telling the crew if they need to make a phone call, they must walk a few blocks to a new one, and never use the same phone more than once a day.

Omar directs Greggs and McNulty to another part of town to find Bird, because, he explains that Avon won't have his men buying dope in the Towers. Sure enough, Bird turns up and is promptly apprehended. Forensics determine quickly that the gun Bird was carrying matches the bullets from the three murders. Unless he gives up Barksdale, Bird will likely face the death penalty. Bird however, remains hostile, prompting Daniels to enter the interrogation room and beat him severely.

In the Pit, Orlando approaches 'DAngelo about going into business together and selling drugs, offering an even split. 'DAngelo seems interested. Wallace has been scarce since Brandon's murder, coping with his guilt by snorting heroin in his apartment.

Omar, who is at police headquarters, explains that he ratted Bird out because Bird killed a regular citizen. "I do some dirt, too, but I never put my gun on nobody who wasn't in the game," he explains. "A man must have a code," Bunk replies, the irony lost on Omar. Bunk also asks Omar if there are any more murders he can help them with, and Omar coughs up details on another: the murder of Denise Redding. When Omar hears the beating Bird is getting, he observes: "Bird sure knows how to bring it out in people, don't he?"

Santangelo arrives at headquarters and he is given the solved Redding case, including two witnesses and the name of the shooter. Santangelo realizes that McNulty and Bunk saved his ass. Appreciative, Santangelo confides in McNulty that Rawls is out to bust him out of the department.

McNulty, distraught at the news Santangelo has given him, visits Rhonda Pearlman at home. "It's about Rawls. He's after my badge," McNulty explains. "They're gonna do me, Ronnie." She is sympathetic to his plight, knowing that the job means much more to McNulty then he would like to let on.