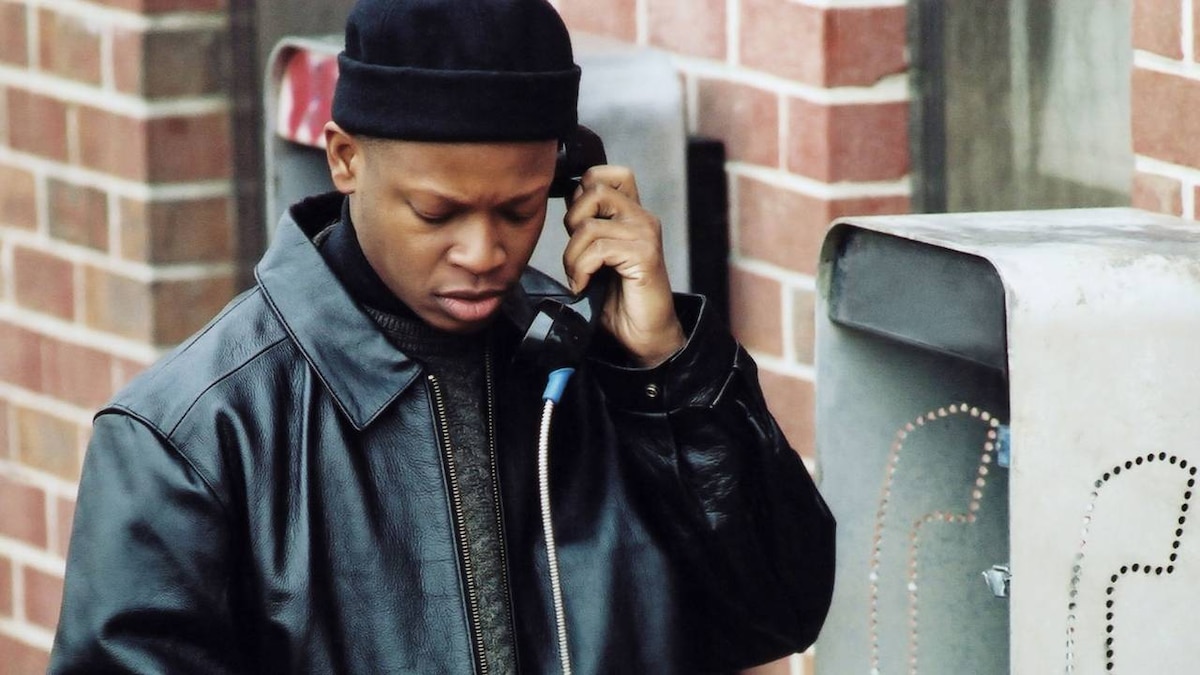 "The King stays the King." - 'DAngelo

In the fallout from the ruckus at the Towers — including a looming Grand Jury investigation — Lieutenant Daniels reluctantly covers for his detectives, saying he sent them to the projects in the middle of the night. "If I tell you I knew they were going, I screwed up," he says to Deputy Commissioner Burrell. "If I tell you I didn't, I get my officers in trouble...I screwed up." However, Daniels does insist that Prez be placed on desk duty. Major Valchek, Prez's father-in-law, says he owes Daniels for helping Prez, and promises Daniels two new cars and a surveillance van as well as some recording equipment to further the investigation.

The recorders, however, turn out to be a joke, bulky and out of date. So McNulty calls upon his FBI pal Fitzhugh to ask for better ones.

At a press conference, Burrell, Rawls and Bunk deny that the killing of the witness Gant had anything to do with 'DAngelo's murder trial.

Still unable to identify Avon Barksdale, McNulty asks Polk to try and get a picture from the housing project's security office. When Polk returns with a photo of a white man, Freamon recalls that Barksdale used to be a Golden Gloves fighter and wrangles a photo of the drug kingpin on an old boxing poster. McNulty's respect for Freamon grows.

McNulty, complaining about his wife's continuing failure to honor his visitation rights, learns that Greggs is a lesbian, and tells her that the only good female cop he's known was also a lesbian. Greggs responds: "All I know is I just love this job."

'DAngelo visits Orlando's Gentlemen's Club, owned by Stringer and Avon through front man Orlando. When 'DAngelo delivers cash from his operation, Stringer is impressed with the haul, commends 'DAngelo and gives him a bonus. 'DAngelo complains that the quality of the drugs they are selling has gone down and the junkies are unhappy. Stringer's response: "They're fiends. What do we care." 'DAngelo is approached by Shardene, a stripper who becomes more interested when 'DAngelo brags that Avon is his uncle and that he's "his right hand man."

Detective Sydnor shows up in the Detail Room dressed as a junkie, preparing to go to the projects with Bubbles to buy drugs. Bubbles advises him to take off his wedding ring, yellow his teeth, get some track marks on his hands and lose 20 pounds. Nevertheless, he manages to make a buy from 'DAngelo's gang.

Lt. Daniels arrives and says they've been ordered to hit the projects and make arrests in a few days. Greggs protests that they don't even know which doors to hit, but Daniels says to hit the stash houses. "Man upstairs wants to see a circus. In a couple of days, we gotta show them three rings." McNulty refuses to take part, saying he won't help gut the case they are trying to build.

Instead, he visits Assistant State's Attorney Rhonda Pearlman at home in the evening, ostensibly to ask for instructions on cloning a beeper to monitor calls the Barksdale's gang receives. After explaining how he can do that, they end up in bed together — not for the first time.

Meanwhile, Omar, a legendary Baltimore stick-up artist, stakes out Avon's drug operation with a plan to steal his stash. 'DAngelo is off buying sandwiches when the stash is stolen and one of 'DAngelo's boys is shot in the process. During the heist, Omar's boyfriend Brandon calls Omar by name. Bubbles, perched nearby, sees the robbery go down.

The next day, the cops — without McNulty — swoop into the projects and round up the drug gang. But they break down the wrong door and are unable to find the stash. During the bust, 'DAngelo's boy Bodie hits Detective Mahon in the face and is beaten badly by the other cops, including Greggs.

Later, drinking beer in his car, McNulty meets up with FBI pal Fitzhugh, who tells him that Lt. Daniels is "dirty." "He has a couple hundred thousand more in assets than any police lieutenant should have," says Fitzhugh, whose FBI unit had been asked to do a study on Daniels. It's been more than a year, he says, and "we're waiting for something to happen."