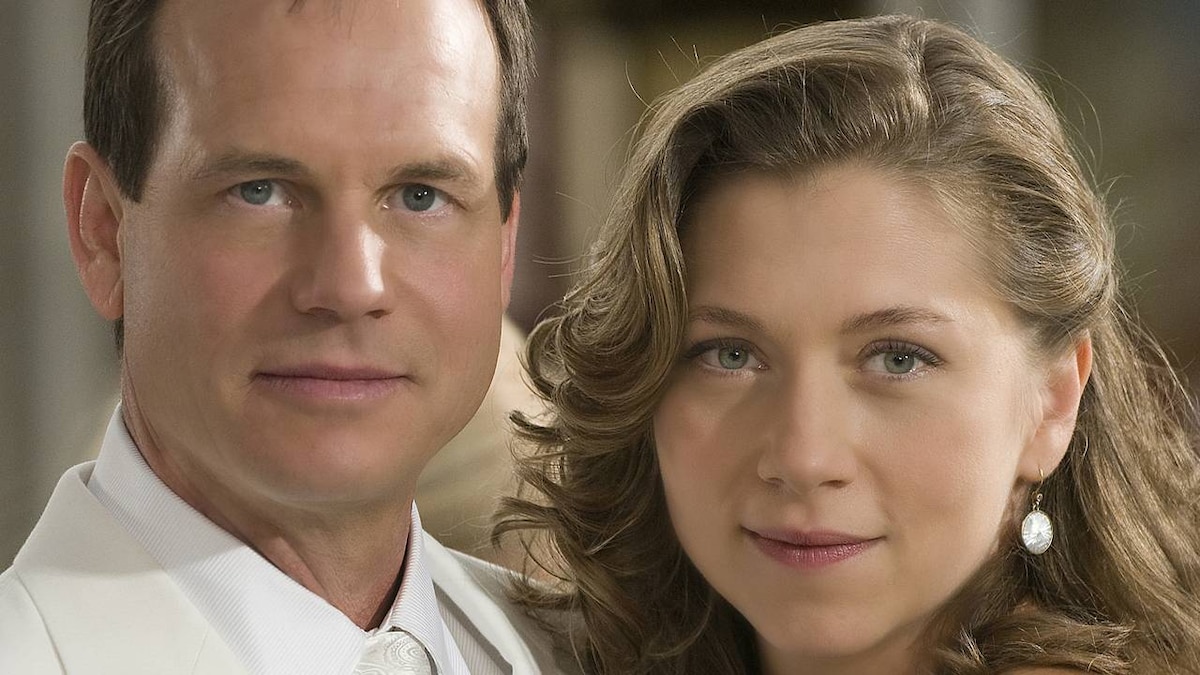 For Better or For Worse

The newly blonde Margene illustrates for Bill, Don and Jerry the "Mormon twist" for their new business venture - buses with hostesses to take people to the casino. Don reports the loan application is before the bank, and when that's approved, all they need is the green light from the Federal gaming commission. Jerry is pleased.

At bowling night, Nicki and Barb wonder why Ana hasn't accepted the proposal yet. Bill gets a call from Joey reporting that Roman has moved to a nearby motel with his wives since he's forbidden from returning to the compound for six more months. Ana accepts the proposal and is taken aback when Bill and the wives schedule the marriage for 3:30 that afternoon. At the ceremony in the backyard, the family looks on as Bill and Ana are sealed. Bill has to run off to work afterwards and Barb announces that she and Bill and Ana discussed it and Bill decided Ana will be living with Barb until they can work out something more permanent. Margene and Nicki are displeased but Barb insists it was Bill's decision.

Bill goes to see Ted, who's changed his mind and set up a meeting with his associate who can bury the anti-gaming bills. The legislator agrees to bury the bills for now. It turns out Ted needs something from Bill: Alby Grant is selling certain church documents and pulled out of a deal to sell something to a friend of Ted's. He wants Bill to use his influence to make Alby sell. Bill is displeased about how he was manipulated but agrees to help.

Ben and Franky talk Sarah and Heather into coming with them on a road trip to the compound. Donna joins them, along with one of the compound girls from the Butt Hutt, who calls Sarah wicked for not supporting Roman Grant. Hanging out on the grounds of Juniper Creek, Sarah tells Heather that her father took a fourth wife and admits to her friend that she wants to keep her baby. They plot how they could go to Arizona together and Heather could help with the baby. Franky learns that his father sent his mother Nita away for whacking him with a shovel. Franky takes off, and Ben chases after him. At Frank's house, Franky demands to know where his mother is, but Frank wants to know from Ben where Lois is. Franky punches his father and Frank runs the boys off his property. Meanwhile, the rest of the group is spotted by Alby's God squad. They flee.

Ana attends her first daily wives meeting, disturbed to hear that Barb "assigns" their duties. Margene pressures Ana to live with her instead of Barb.

Bill calls Joey who's back on the compound, and reports that he's got Lois set up at one of Don's apartments. Joey reports that Alby's turned the compound into a police state - with curfews and a police force, and not letting any outsiders on the compound. He tells Bill about the pow-wow Roman's called. Alby and Nicki have both been summoned. At his meeting, Roman threatens to reveal that Alby and one of his wives tried to kill him, but Alby counters with his own threat - disclosing that Adaleen tried to have him killed. Adaleen points out that the location of the alleged incident isn't information Alby wants known. Alby has to agree to not openly defy Roman. Next, Roman threatens to tell Bill how Nicki helped him during his trial; she, too, must fall in line.

Barb tells Ana she feels like she has a true friend now - Nicki and Margene are more sisters than friends. Ana admits that Margene asked her to live with her but says she'd rather stay with Barb, who insists they have to let Bill handle it.

When Bill spots Nicki at Roman's motel meeting, she insists she's only there to protect their family. Bill confronts Alby about the documents he's selling. He says he's been collecting them from the faithful and selling them to replenish the compound. Bill asks Alby to reconsider the sale to Ted's colleague, suggesting he can get Alby a better offer.

Bill calls a meeting with all of the wives to give his verdict on the living situation: He's decided Ana should live with Nicki since they know each other the least. He leaves, having managed to upset all of them with this news. On moving day, Nicki offers Ana a drawer and a nook. Barb and Margene run to Bill, insisting he's making a huge mistake making Ana live with Nicki. Ana demands her own house. When she offers to help with a down payment, Bill informs her she should be putting all of her money into the communal pot. She blows up, refusing to pool her earnings.

Ray sees Nicki packing her things and is surprised she's quitting. She blames family problems. They're both sorry she's leaving. Later, Nicki gets a phone message from Ray, saying he misses her and asking her to come back. Ana shows up and takes Nicki on a "bonding" bowling date. They get drunk and Ana confides she thinks Barb is lonely. Later, tipsy, Nicki leaves a message for Ray saying she does want to come back to work.

Franky comes to Ben before dawn to tell him he's going to Nicaragua to find his mother - he got a lead from Jodean.

The bank denies Bill and Don's loan. Meanwhile, Barb gets tipped off that Ted didn't really have the anti-gaming bills killed and Bill races to Ted to confront him. He tells Ted the price of Alby's document has gone up: Ted has to make sure the bills are stopped and his loan is approved.

When Barb refuses Margene's offer to move in with her and give Ana her house for a while, Margie's feelings are hurt. Later, Nicki and Margie watch Barb and Ana having fun. Nicki turns Margie against Barb, and gets her to help rip up the newly planted flowers in the yard to make a statement. Barb runs out to stop them and the three of them argue over Ana. Barb admits she wants Ana as a friend because she makes her feel normal, "like choosing this life wasn't a mistake." When Bill and Ana overhear the fight, he begs Ana to go away with him on a honeymoon. But Ana tells them all she can't stay in the marriage. She asks for a divorce.