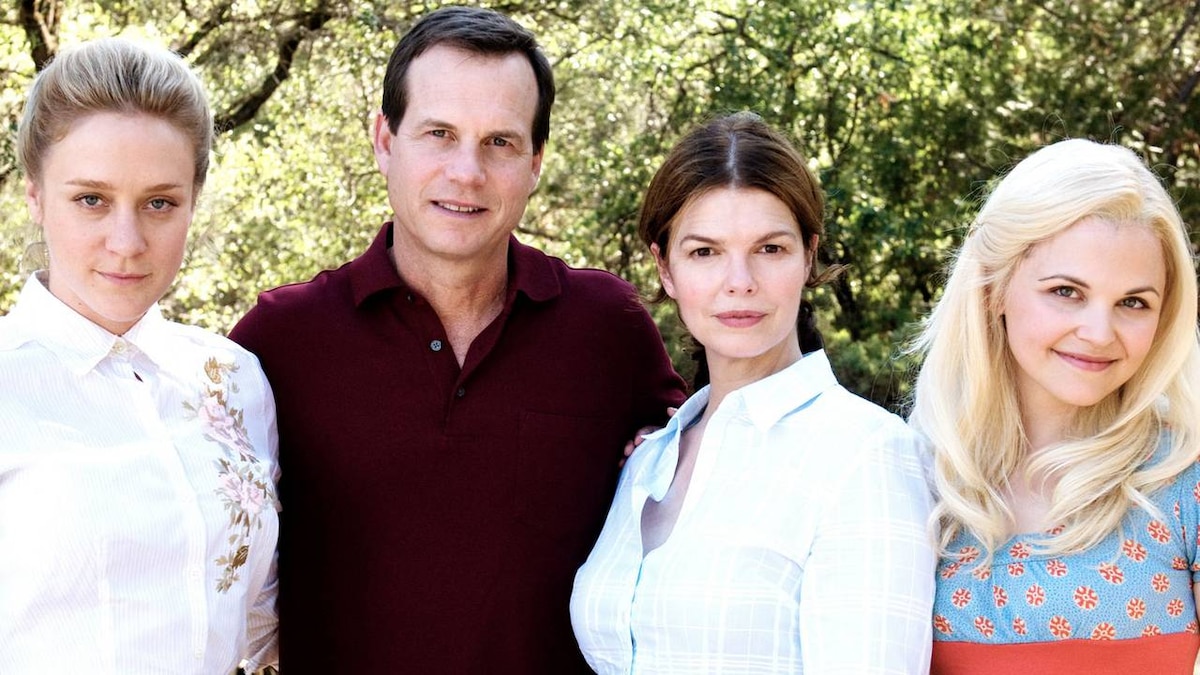 The Henricksons go on a vacation, a cross-country road trip/pilgrimage to the annual Hill Cumorah Pageant in upstate New York. Bill wants to bury their family time capsule smack in the heart of Mormondom - where the Angel Moroni lead Joseph Smith to the golden tablets that became the Book of Mormon.

Caravanning in three cars, Barb tells Bill she's eager to put some distance between the family and the trial and "the whole Ana thing," Sarah complains to Ben about her fatigue and nausea and Margene and Nicki complain about Barb.

That evening, Margene interrupts Bill chasing some pills down the motel bathroom drain and reveals that she brought Ginger's ashes on the trip and has figured out that her mother's uncle lives just 150 miles from their route. She begs Bill to let her take a quick side trip to drop off her mother's ashes while Bill and everyone else are at the riverboat Casino visiting Jerry. As he agrees, Margie realizes the pills Bill is taking are Viagra. She vows to keep his secret. Meanwhile, in their room, Barb is concerned when Nicki gets a call from her boss Ray - she'd thought Nicki's job assignment was over.

Ben and Margene have fun playing a word game in the car the next day and Ben compliments Margene's blonde hair.

In another car, Sarah resists Barb's plans for a mother-daughter shopping spree to prepare for college. She tells Barb that Heather's going to ASU too. Later, Sarah confides to a concerned and skeptical Ben she's keeping the baby and she and Heather are going to raise it together.

On a tour of Carthage Jail, the family listens to an audio re-enactment of the murder of the Prophet Joseph Smith. Bill tries to correct a fellow tour member about the details of Smith's life.

That night, Nicki gives Bill a cardigan (like Ray wears) and is trying to seduce him when Margene interrupts in her bikini, to see if they want to go for a swim. Seeing Bill's desperate look, Margene comes to his rescue with a passionate goodnight kiss - human Viagra for his night with Nicki. Nicki is not pleased.

Getting ready for bed after swimming, Margene and Ben inadvertently see each other naked. Margene runs off. The next day, she insists on riding with Ben to clear the air. Ben tells her he's not embarrassed but it was a big deal to him.

Barb insists on joining Nicki and Margene on the side trip to drop off Ginger's ashes. On the drive, Nicki challenges Margene about her inappropriate goodnight kiss with Bill and Margene lets slip that Bill takes Viagra, much to Nicki and Barb's dismay. Ultimately, Margene decides not to leave Ginger's ashes at her relative's when she hears how judgmental they were of her mother.

Sarah confides the trouble she's having with Barb being overprotective and Bill defends her mother. He suggests a night out in Chicago on the way home - just father and daughter - and Sarah lights up.

At Jerry's Delta Casino, Bill meets with Jerry, his wife and Vicki Nabors - Jim Nabor's daughter - a Casino booking agent, who explains the talent they can expect to get for their new venture. Meanwhile, wandering around the area, Tancy tries to convert an African-American Baptist preacher to Mormonism and he gets angry and tells off Bill for brainwashing his daughter; Bill defends their beliefs.

Ben gives Margene a note. Upset by what she reads, she leaves Ginger's urn on the roof of her car and it falls and breaks as she drives off; her mother's ashes blow away leaving Margene only with the shattered pot. At the Super 8 that night, Bill baptizes Barb in the motel bathtub on behalf of Ginger as the family looks on.

When Bill spots the family time capsule covered in spilled juice, he loses his temper and insists they all hurry up so they aren't late for the pageant. He goes into the woods to clean up the time capsule and when he emerges, the family has left without him. Everyone thinks he is in someone else's car and Bill is forced walk along the road with the time capsule, his feet blistering. He gets a ride and meets them later at the hotel in Camorah.

Tancy finds Ben's note and confronts Margene about it. Margene insists nothing happened and demands that Tancy keep it to herself. Margene goes to Ben and tells him he has to get over his feelings for her, insisting she loves him as a mother, and nothing else.

Searching for aspirin in the bathroom, Barb finds Nicki's brith control pills and thinks they're Sarah's. Nicki doesn't correct her. When Barb confronts Sarah about the birth control pills, Sarah denies they're hers, but Barb demands that she stop having sex. Unable to explain herself, Sarah runs off and Nicki chases after her. Bill arrives in the midst of the crisis. When he and the three wives gather to discuss the situation, Nicki confesses that the pills are hers, explaining she's been taking them for cramps. Bill demands to know for how long and when she admits it was 4 years they all get furious. Bill accuses her of undermining the mission and future of the family - still, Nicki won't promise to stop. It's getting late and Bill insists they all go bury the time capsule and attend the pageant. As they traipse out to the burial spot, Bill tries to gather his family together with words of comfort. But no one wants to miss the pageant and they rush to catch the show, leaving Bill to pray and ask for guidance for his family -- as the Angel Moroni rises behind him at the pageant.

Back at the hotel, Nicki finds Sarah sobbing in the bathroom, having a miscarriage. The next morning, as they drive towards home, Nicki promises to stand by Sarah but insists they tell the family what happened. Nicki breaks the news to Bill and Barb by cell phone and the family pulls over and Sarah is comforted by her parents.