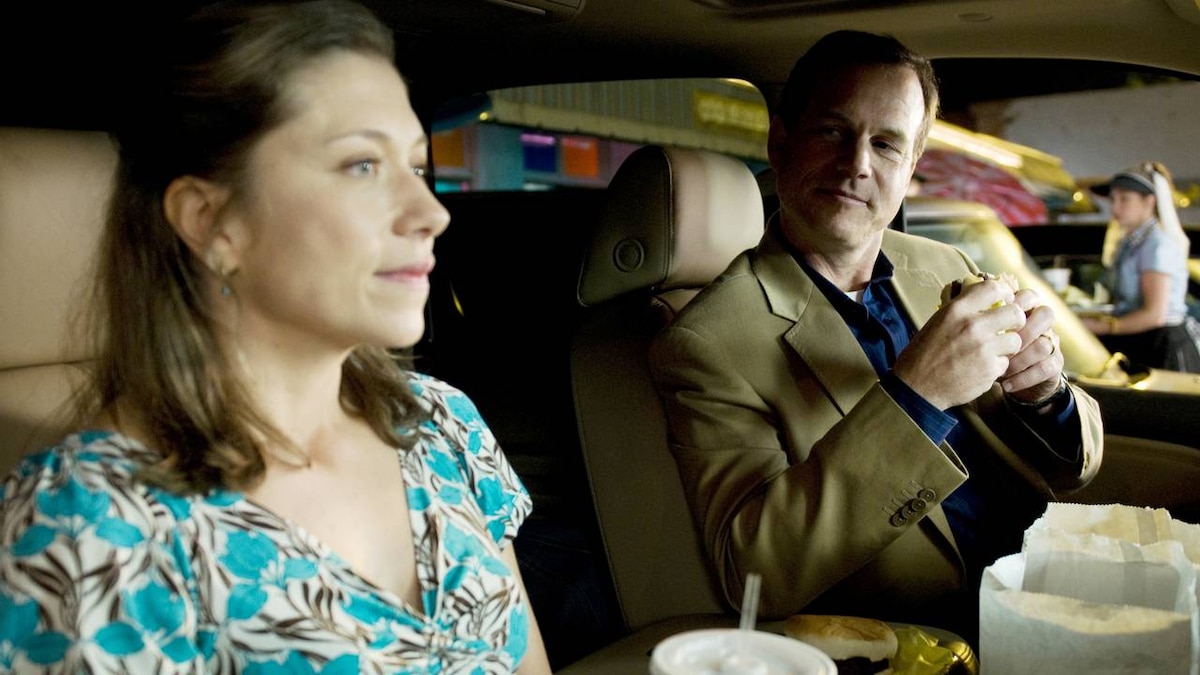 Bill and Ana navigate dating - along with Barb, Nicki, Margene and the kids. Ana can't get used to the idea of dating being a group event. Meanwhile, Barb, Nicki and Margene are at odds over how much courting (from them) Ana needs.

Margie insists to Bill that she does not want to get pregnant again any time soon; it's Nicki's turn. She wonders why Nicki's been unable to conceive and Bill, baffled as well, turns to Barb, asking if Nicki's discussed it with her. When Barb and Margene confront Nicki about what might be wrong, she's furious that Bill's been speaking about such a private matter behind her back. She insists to Bill there's nothing wrong physically; what they need is a blessing from Roman. After initial resistance, Bill gives in.

At the prison, Roman asks to see Bill alone after his blessing, and demands his help locating Rhonda (who Nicki has discovered is one of the Jane Does). If Rhonda is a witness, Roman warns, he will make sure Bill's wives and children are called to testify about her credibility -- thereby exposing them in public. Backed into a corner, Bill realizes he has to stop Rhonda. Meanwhile, Adaleen and Nicki are plotting to locate Rhonda themselves.

Wracked with guilt, Kathy begs Joey to tell Wanda that she's testifying against Roman but Joey insists it's safest to keep her in the dark. But Wanda is displeased with what she perceives as Joey and Kathy's extra closeness and demands that Alby get rid of Kathy - or else. Alby warns Wanda to leave Kathy alone, then alerts Joey to Wanda's threat and counters with one of his own: he'll send Wanda away if she poses a threat to Kathy testifying against Roman.

Barb goes alone to have her biopsy. Afterwards they won't let her drive herself home so she has to call Bill for a ride. Stunned to learn she may be sick again, Bill realizes this is the reason Barb changed her mind about dating Ana.

Bill's and Don's presentation to Jerry for their casino plans is a bust because Jerry was expecting a model (which Don promised and then forgot to tell Bill). Afterwards, Bill chews his partner out, but Don refuses to put any more money into building a model insisting he's too stretched.

After making love with Scott, Sarah tells him she's going to Arizona State; hurt, he wonders why she's running away from her problems - and him. Back home, Sarah announces to Barb she was accepted into ASU's nursing program and wants to go. Stunned, Barb tells her they can't afford it and demands to know if this has anything to do with Ana; Sarah doesn't deny it.

Empowered by her success as a business woman, Margie entertains Ana at the Henricksons' dinner date with the story of the recent sale she made for Weber. Nicki sighs in frustration, accusing Margie is of neglecting her duties as wife and mother in favor of "sales associate" and all three wives get into an argument as Bill tries to keep the peace. Ana observes as the outsider that she is.

Margie shows up at the meeting with Jerry with the expensive new model for the casino. Don loses his cool before the meeting and Bill sends him home. Jerry likes the model, but is doubtful about Bill and Don's ability to work together, not to mention the bad publicity of polygamy being front page news. Margie tries to stop him by pleading that his dismissal of Bill because of polygamy is the same as dismissing Jerry as a "dirty Indian." Jerry is insulted and Bill is furious at her outburst.

Bill learns from Don's wife Peg that Vernie and Jo-Jo (Don's two other wives) ran off with their kids - Don and Peg are now unwillingly monogamous.

Nicki confides to her mother that she doesn't want to have another baby, having seen that Adaleen resented having so many children that it made her more mother and less wife. Her mother chastises Nicki for being selfish.

Frank shows up at Lois's with Jodean to introduce her to her new sister-wife and ends up attacking Lois when she taunts him right back. As he chokes her, Wanda tries to stop him, waving a knife and Nita (Franky's mother) hears Wanda's cries for help and whacks Frank with a shovel. Lois takes over, sending Nita and her other sister-wives away as she deals with Frank's limp body.

Ana cancels their third date at the last minute, insisting there's no room for her in their life. Bill tells Nicki what's going on with Barb's health, swearing her to secrecy. Barb tells Nicki she needs to talk - catching her off guard when she announces they've made an appointment with a fertility specialist. In the waiting room, Margie (feeling like a failure after the meeting with Jerry) tells Barb she's decided it's time for her to be a mother now; but in the future, she'd like to pursue sales. In her exam, Nicki confesses to the doctor that she's been taking birth control and he asks whether she wants to have a child, reminding her it's her choice. She insists she loves being a mother, but ultimately asks for another birth control prescription.

Franky takes Sarah, Heather, Donna and Ben to the "Butt Hutt," a group flop house for kids kicked off the Juniper Creek compound. Scott follows Sarah there to tell her he'll get a job in Phoenix and go with her, but Sarah breaks up with him. As she heads back into the house crying, Franky comforts her. Heather comes running to Sarah and Ben: she's found Rhonda's room. When Franky defends her they realize she's his girlfriend.

Bill tracks Jerry down to apologize for Margie's outburst but Jerry says he's realized she was right. Bill makes a plea for their unlikely partnership and Jerry agrees: Weber Gaming is back in business.

Bill attends Ben's flag ceremony and tells Don the good news about Jerry. He asks Don to apply for the business loan since he's now a credit-worthy monogamous. They watch proudly as Ben raises the flag. Bill calls Lois to report his pride about being able to be at a public event with all of his sons. As Lois hangs up, she ties up Frank.

Sarah sobs, a copy of 'Options for a Young Mother' on her lap. Meanwhile, Ana opens the door to find Bill and the entire family there for an indoor picnic. Barb gets a call from the doctor - her test is clean. She reveals the good news to Bill with a look and Nicki beams, catching their exchange. With the good news, Barb suddenly sees Ana joining the family in a new light.