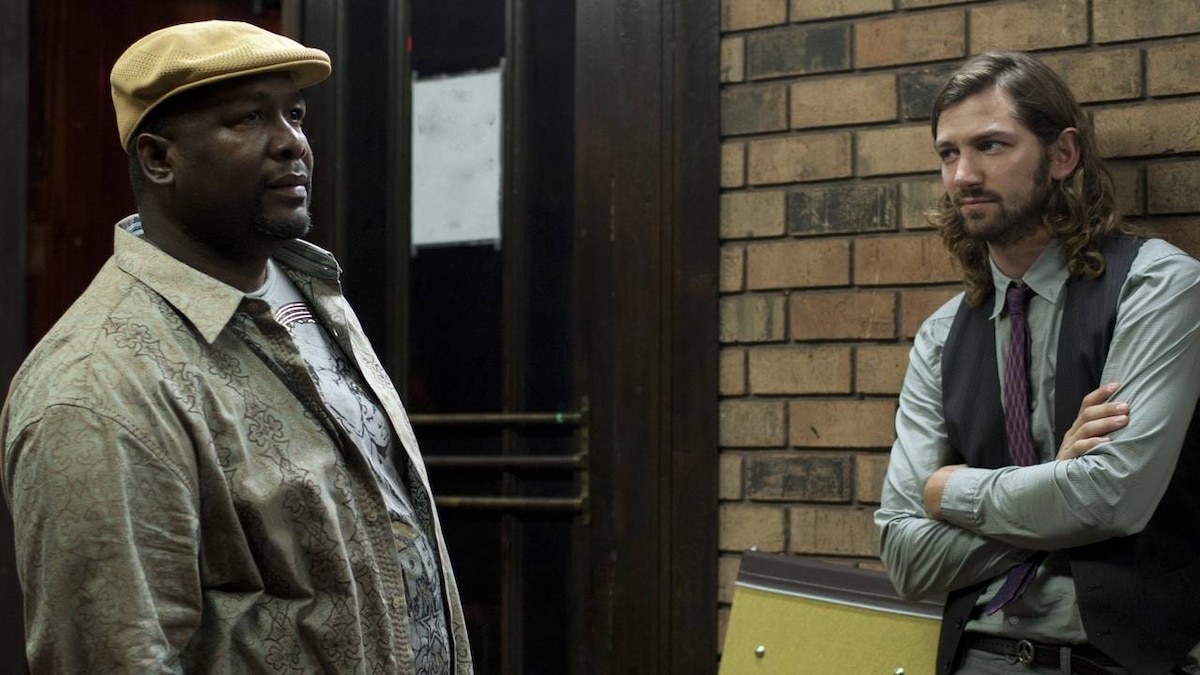 This is how the bands end: the Brassy Knoll with a bang, the Soul Apostles with a whimper.

Antoine Batiste listens to phone messages from his Soul Apostles. Those that don't have an excuse, have a complaint. At the gig that night, so few of the musicians show, Batiste not only cancels the show, he disbands the band.

Davis McAlary arrives at a Brassy Knoll gig and finds Alex McMurray holding down his guitar chair. He goes through the motions of playing the show, but he's clearly uncomfortable. Then Aunt Mimi tells him that she's sold Lil Calliope's contract to Cash Money Records. It all looks pretty bleak until Davis,in his final performance with the band, channels James Brown to the amusement and amazement of all.

Janette Desautel arrives back in New Orleans and discovers that the St. Charles streetcar line is operating again. After a delightful ride, she and Susan Spicer attend an immigration hearing for sous chef/grill man Jacques Jhoni. Jacques is released and he and Janette dance the night away to the sounds of the Rebirth Brass Band at the Maple Leaf. They wake up in bed together, having broken one of the cardinal rules of professional kitchen etiquette.

Toni Bernette has reached an impasse in her investigations into the killings of Joey Abreu and Leon Seals. She finds out she's losing an ally when Andrea Cazayoux tells Toni that she can't take the crime in New Orleans anymore. Andrea and her husband are moving to Birmingham.

Toni does get some advice from Judge Prieur, a friend, mentor and former judge who is doing time in federal prison. Prieur tells her that City Council President Oliver Thomas, in whose office Sofia has been working, is the target of a federal investigation. Stan "Pampy" Barre, has implicated Thomas in a scandal in the hope of getting a reduced sentence for himself. Prieur recommends that she try to get the F.B.I. involved in the investigation. Later, she does. But for now, she reluctantly gives in to a demand by Terry Colson that she turn over the spent bullet casings that were recovered from the Leon Seals crime scene.

Colson is having his own problems over at the homicide unit of NOPD, but he has a plan: He sends the two bullet casings he got from Toni to the ballistics lab and asks to have them compared. He tells Homicide Captain John Guidry that the casings are from the Abreu and Seals shootings -- one from each crime. He also says there are witnesses who claim that the police were the shooters in both instances. When he calls the lab for the results, he finds only one bullet casing was sent to the lab; other has "disappeared." Truth is, they were both from the Seals scene.

Separately, Colson also approaches the F.B.I. He turns over files on those two cases and several others the NOPD has barely investigated, including that of the Danziger Bridge killings.

On the water, oyster boat captain, Uncle Don "trades Sonny to a shrimp boat captain. The captain is the father of Linh, the girl with whom Sonny is so smitten. While shrimping out in Gulf of Mexico, Sonny learns something about the impact of oil drilling on Louisiana's fisheries. The captain tells him that oil is constantly leaking from abandoned wells. When everyone keeps calling him "Vô dụng" (pronounced yo-yung), Sonny learns his nickname means "useless." After all the hard work and this little indignity, Sonny gets tacit permission to spend time with Linh.

A potential buyer checks out Gigi's, but LaDonna is not an enthusiastic seller. Still she goes to another bar and offers to sell her equipment to the owner. On the way out, she sees one of the men who beat and raped her. She calls the cops and they quickly re-arrest the man, but not before LaDonna's fury reaches the boiling point. She unloads on Assistant District Attorney Brigitte Baron, not only for the "clerical mistake" that allowed the man to walk free, but for many of the other failures of government that have made it so difficult for New Orleanians to rebuild their city and their lives. In the tirade, Larry sees a glimpse of the feisty woman he married. "I tell you one thing," he says, "We ain't selling that damn bar. Look at you. This is who I married… And we ain't staying in Baton Rouge neither."

The Lambreaux siblings meet with James Woodrow to hand over the personal checks that will constitute the "royalty" payments they are going to give their father to help him rebuild his house. When Albert Lambreaux gets his check for $20,000, he exclaims, "We gotta cut another record." Delmond Lambreaux has hatched a plan to pay his share of the "royalty" payments: He's going to pack up his New York apartment, leave most of his stuff with Jill, his New York girlfriend, and spend most of his time in New Orleans helping his father rebuild. Jill's not going for it. She thinks Delmond wants a long-term storage space, not a long-term relationship, and walks.

Nelson Hidalgo is surprised to learn that his debris removal contract is not being automatically renewed. C.J. Liguori tells him why: Hidalgo's relationship to Oliver Thomas could draw unwanted attention to the business deals that Hidalgo and Liguori have been working on. Drunk and depressed, Hidalgo tells his cousin Arnie Reyes that he could even end up doing jail time.

Word is spreading about the quality of the food Janette is cooking in David Chang's kitchen. An investor approaches her about returning to New Orleans and opening a restaurant. She flies home again to check out the possibility.

At Jazz Fest, Delmond and Albert join Donald Harrison on stage to perform a song from their Indian album. Janette and Jacques check out the Iguanas and Davis and Annie check out Lucinda Williams.

Sofia and Toni have reconciled. Sofia takes the blue streak out of her hair and they enjoy their own night of Rebirth at the Maple Leaf.

Davis stops in the WWOZ studios during Jeffy Jeff's late set. He speculates about getting his old job back, then spins a few tunes while Jeff grabs a few winks on the lobby couch.

Batiste and Desiree move from the suburbs to a new apartment in town. Annie continues to write songs. LaDonna returns to Gigi's with Larry. Colson and Toni run into each other at a coffee shop, but they don't give each other the time of day. Lambreaux and Delmond hang sheetrock in the family home.