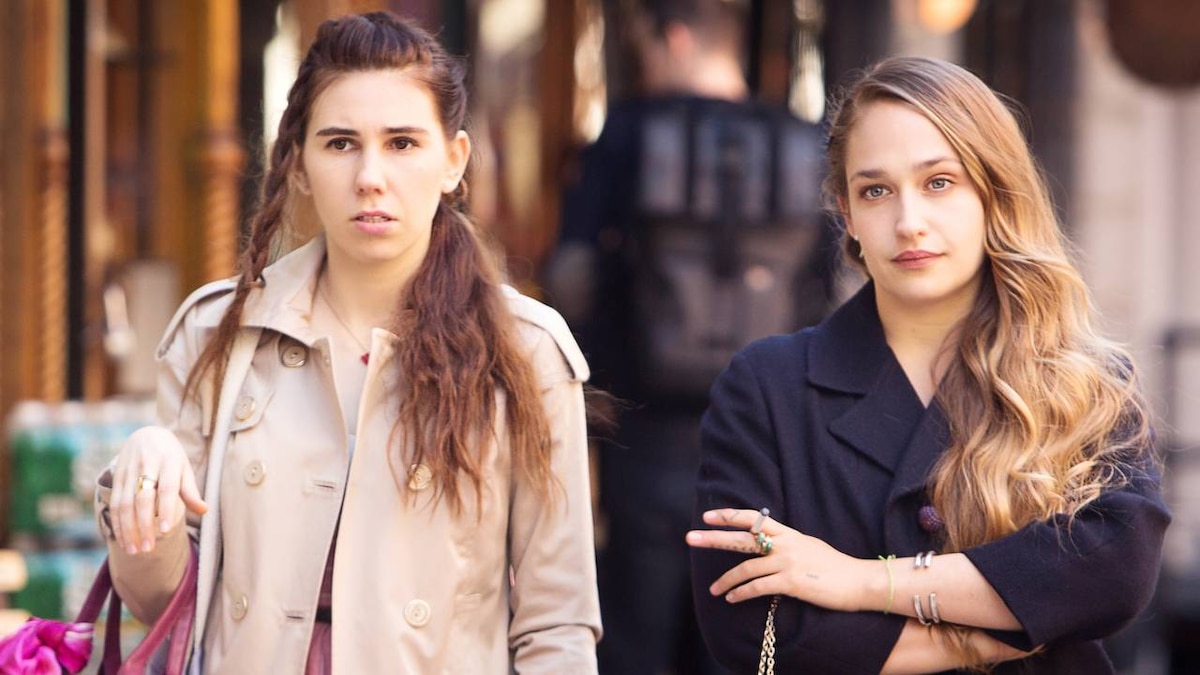 Hannah and Adam attend David's funeral where they meet a beautiful woman, Annaliese, who they are shocked to learn is David's widow. Annaliese is overcome with emotion upon meeting Hannah until she realizes that she is not who she thinks she is -- an "amazing girl" named Paige who was writing a memoir about her struggles with obesity and Tourette's syndrome. As they take their seats, Adam openly questions David's sexuality. Hannah is equally surprised. "He had gay apps on his iPhone and he liked to show his ankles, but what does that even mean in this day and age?"

After the service, Hannah approaches Annaliese, who accidentally reveals that David's company has dropped all of his projects, including Hannah's e-book. Incredulous, Hannah asks the grieving widow for a new publishing contact so that she can -- in a poorly chosen turn of phrase -- keep her book alive. "If I give you another name," Annaliese asks, "will you get the f*ck out of here?"

While out for a walk with Shoshanna, Jessa spots a Help Wanted sign in the window of Sweet Emma, a children's clothing store. Set on making real changes in her life, Jessa decides that this is a job she must have. Shoshanna questions the wisdom of the plan, asking, "Are you sure that's the kind of job you should be having? Being near things that children are near?"

Exhausted by Adam and Caroline's increasingly hostile family squabbles, Hannah invites the Sackler siblings to take a seat at the "listening table." She proudly claims to have watched enough ‘Dr. Phil' and ‘Intervention' to know that any problem can be resolved through the art of communication. However, the faux therapy session quickly unravels when Caroline accuses her brother of harboring sexual fantasies about her. Hannah makes some headway in squashing this familial beef after expressing the loneliness that she's always felt as an only child.

Amidst the chaos, Marnie calls and demands that Hannah come over and meet her new kitten. When Hannah explains she's in the middle of a "very real moment," Marnie hangs up on her. Gazing upon her new feline companion, Marnie coos, "You're my best friend."

The following day, Hannah takes a meeting with a new publisher. They are big fans of Hannah's book, but because they don't do e-books, they express interest in publishing her work as "an actual book that you can hold." Hannah is ecstatic. "I just said yes to an e-book because it was better than a no-book!"

Marnie, lonely and distraught after months of heartbreak and rejection, finds herself searching for answers. She tracks down the one person who she believes will tell her exactly what is wrong with her. She arrives at Ray's door and he rattles off a list of cold, hard truths, concluding that she's a "huge, fat, f*cking phony." He softens the blow by assuring her that he still likes her, since he knows that her flaws come from a deep well of insecurity and that she's a good person at heart. He offers Marnie a hug, which quickly leads to sex. Afterwards, when Ray suggests they keep their tryst a secret, Marnie is more than happy to oblige. "Go f*ck yourself. Like I'd advertise this?"

After her meeting, Hannah receives a call from her dad, who explains that cousin Rudy has looked over her old contract with David's company and discovered that they retain the rights to her book for the next three years. Hannah doesn't take this news well, insulting cousin Rudy's credentials as a Subway sandwiches franchise lawyer and questioning her father's sanity.

Back at home, Hannah reviews her contract and confirms Rudy's damning revelation. She vents her frustration to Caroline, who encourages her to write another book and shares the story of her failed audition for ‘Independence Day," before attempting to turn Hannah against Adam. Sick of Caroline's bullshit, Hannah tells her to "get the f*ck out" of her apartment.

When Adam arrives home, Hannah, expecting him to be thrilled, announces that she threw Caroline out. But she's miscalculated -- Adam is furious. "I'm supposed to be taking care of her. She's my sister. Do you understand that?"