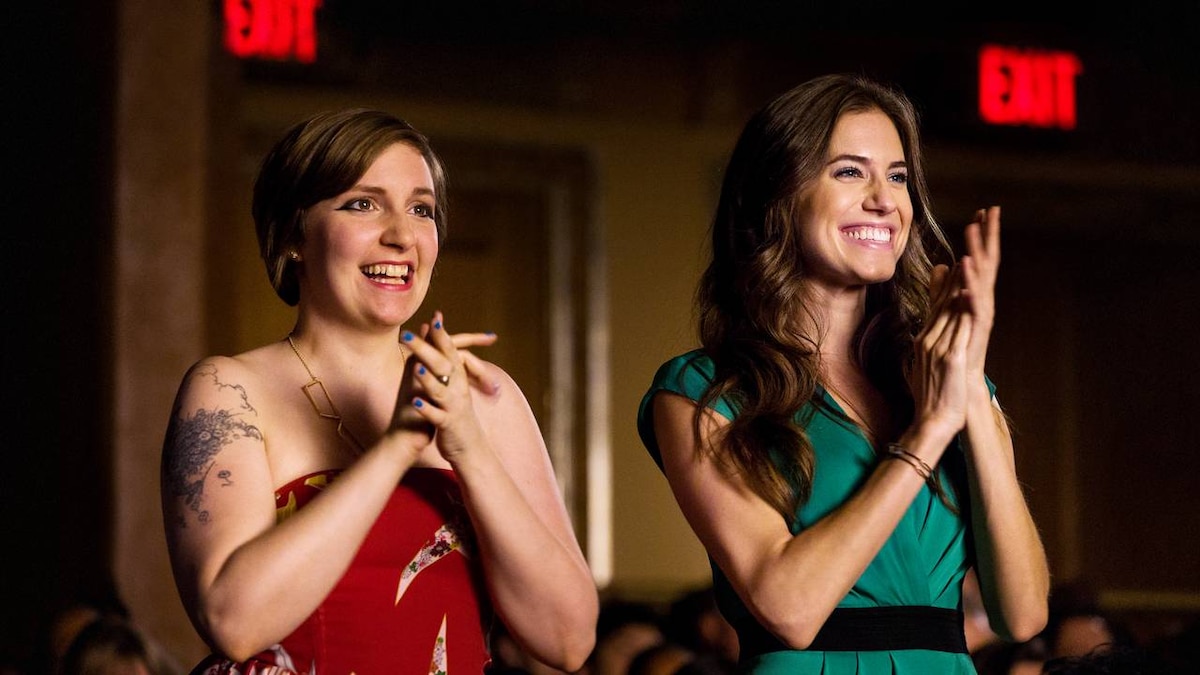 Hannah runs into Adam's sister Caroline while checking her mail. Caroline reveals that she's been living downstairs with Laird and is pregnant with his child. She shares with Hannah her hope that Adam doesn't "shuck her off like a piece of summer corn" in the wake of his Broadway success. Hannah opens a letter from the University of Iowa and discovers that she has been accepted into the Writers' Workshop, the school's prestigious MFA program.

Hannah heads to Marnie's to share her exciting news, though she says she's uncertain about whether or not she should go. Marnie insists, "You got into Iowa. You f*cking go."

Beedie reveals the real reason she hired Jessa -- she wants her help committing suicide. She wakes up every day disappointed that she didn't die in the night. Jessa initially refuses, but Beedie explains that she thought Jessa would be the only person who would truly understand her request. After some prodding, Jessa begins to reconsider.

Nearing graduation, Shoshanna goes to pick up her cap and gown, but the student in charge tells her she's not cleared to graduate and needs to speak to her advisor. Shoshanna heads home and goes on a mini-rampage, throwing the neatly organized items of her apartment into disarray. Marnie arrives and Shoshanna reveals that her "f*cking c*nt of a glaciology professor" decided to "fail the shit" out of her. Marnie offers a story about her own collegiate failures, providing Shoshanna a measure of comfort. This peace is short-lived, however, as Marnie admits that she slept with Ray "more than once and sometimes multiple times a night." Enraged, Shoshanna tackles Marnie to the bed and screams in her face the succinct message, "I hate you!"

While getting ready for Adam's opening night, Hannah calls her parents to share her Iowa news. Loreen and Tad are ecstatic; Tad even does a little jig. Hannah again expresses doubts about accepting their offer, but Loreen insists that when these kinds of opportunities arise, "You say yes and you figure it out."

That evening, Hannah visits Adam in his dressing room and tells him how proud she is of him and how he taught her a lot about perseverance and commitment and creativity. They share their love for each other, and Hannah reveals her big grad school news. "Watching you thrive creatively over these past few weeks has made me want to thrive. It's made me want to find a hole in the world in the shape of me and just fill it up." She tells him that she thinks she's going to go for it and they'll figure it out. Adam smiles tightly and kisses her goodbye.

Hannah waits with Elijah and Ray in the lobby of the Belasco Theater as Shoshanna and Marnie arrive. When Marnie excuses herself, Shoshanna hisses at Ray, "At intermission, you're going to buy me some M&Ms and we're going to have a f*cking chat."

Marnie heads to Desi's dressing room and presents him with a special opening night gift: a guitar pick that once belonged to his hero, James Taylor. Touched by the gesture, Desi thanks Marnie with a hug that turns into a passionate kiss. Marnie returns to the theater glowing, but Hannah is disappointed when she hears why. "Marnie, that's another person with a girlfriend!"

During intermission, Ray apologizes to Shoshanna and reminds her that she is the one who broke up with him. Shoshanna admits she wants him back, explaining that he keeps her stable and makes her want to be the best version of herself. "I want to pretend I was never not your girlfriend before," she says. "I love you." Despite being moved by her plea, Ray doesn't want her back. He thanks her for breaking up with him -- it was the push forward he needed. He heads back into the theater, leaving Shoshanna crying and alone in the lobby.

Hannah dozes off in her seat, but Elijah wakes her in time for the beginning of Act Two and Adam's first appearance on stage. She is enchanted by his performance. The curtain falls and Marnie heads to the bathroom, where she is confronted by Desi's girlfriend Clementine. Sensing that Marnie has feelings for Desi, Clementine warns her that soon Desi will realize that Marnie is nothing more than a "pathetic mess" and won't want anything to do with her.

Jessa helps Beedie down a bunch of pills and assures her she won't take any herself after Beedie is dead. "Somehow," Jessa says, "they don't look nearly as fun when they're being used to murder someone."

Despite everyone raving about his performance, Adam tells Hannah that he was "f*cking terrible" -- he blames her for springing her Iowa news on him minutes before the show. Shocked, Hannah insists she only told him because she thought it was great news for them as a couple. She says they can work it out, but Adam says he's "sick of trying to work it out." He adds: "Can't one thing ever be easy with you?" Hannah quietly congratulates him on a beautiful opening night and walks off.

Back home, Shoshanna tends to the debris in her apartment. Beedie, overcome by regret, orders Jessa to call 911 -- she's not ready to die after all. Marnie watches Desi and Clementine fight outside the ‘Major Barbara' opening night party. A miserable Adam takes photos with his fellow cast members. Hannah returns to her apartment alone, clutches her Iowa acceptance letter to her chest, and smiles.