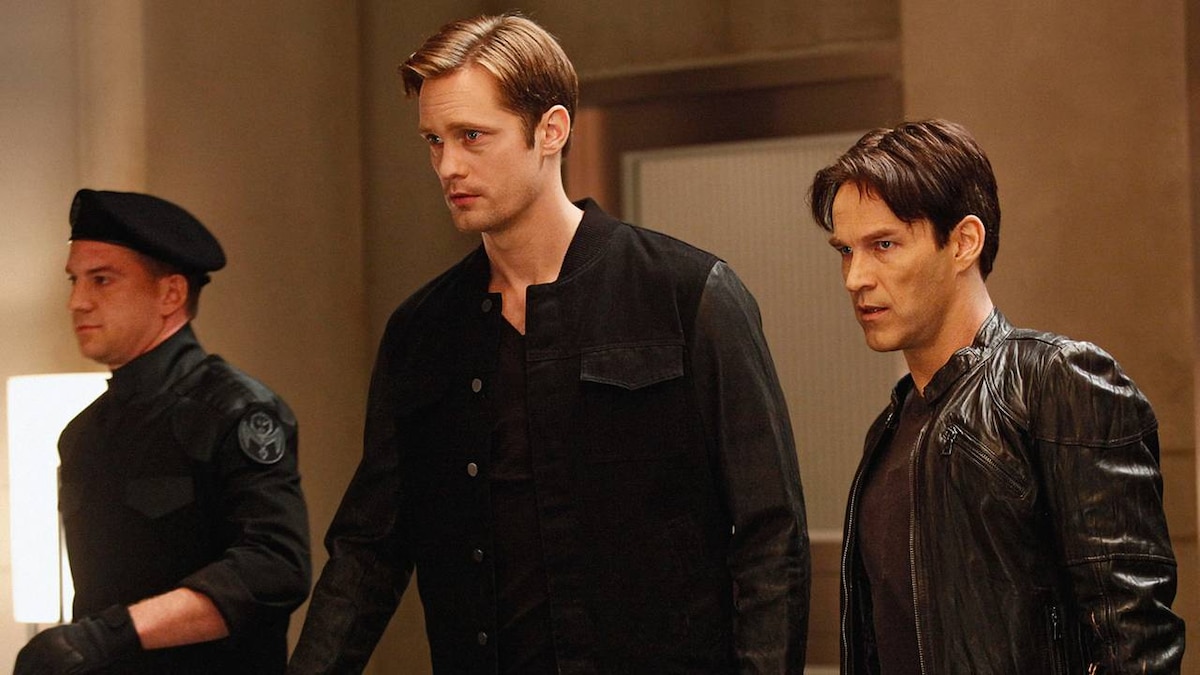 Inside the abandoned asylum, wolves emerge and one, J.D., pulls Alcide from the room. Left alone with Sookie, Russell heads for her, but she turns her faerie fingers on him. When Eric prepares to stake the weakened Russell, Bill stops him from doing so--"He dies, we die." Kibwe arrives and takes Russell into Authority custody.

Pam watches Tara and Jessica continue their fight and then breaks it up. Pulling Tara outside, Pam reminds her she's just an employee-but that she's proud, "the way a human is proud of a well-trained dog."

Patrick and Terry run from the bunker when the ifrit attacks. Terry blames Patrick for Eller's death, and as they drive back, he flips out about the target Patrick has put on their backs.

Alcide stands over the bodies of two wolves, now in human form; J.D. escaped. Kibwe criticizes Bill and Eric for involving humans and wolves, but Bill explains that Doug was a necessary part of their search. To appease Kibwe, Bill glamours Sookie and Eric takes care of Alcide. Eric instructs Alcide to forget what happened, to protect Sookie--and to be repulsed by her. Pretending to glamour Sookie, Bill wishes her the life that she's meant to live: "in the sun" with other humans.

When Bill seems too on-board with Kibwe about Lilith's omnipotence, Bill assures Eric he's just covering his ass. Kibwe rounds up the surviving prisoners for interrogation and promises they will be glamoured after questioning. Later, Kibwe offers them his apologies for the inconvenience...and then kills them all.

Martha brings Emma, back in human form, to the hospital to see Luna and Sam. Although hesitant, Luna agrees that Martha can be a part of Emma's life and asks her to watch her until they can figure out who's been killing shifters.

Hoyt tells Jessica he knows that she was fighting for him because she still cares about him. When she says they're truly over, he offers to let her do anything she wants, no matter how depraved, "Just please do it with me." Jessica turns him down again.

Because Alcide can't remember the night's events, Sookie revives his memory about the V-addicted wolves working for Russell.

Lafayette rushes to see his mother--he was told she was having a seizure. Ruby Jean tells him that she has a message from Jesus. Amazed at his mother's skills, Lafayette realizes that Jesus is with Don Bartolo.

Sam meets with Andy and confides that he thinks supes are being hunted. He offers his help to Andy, who worries about encouraging vigilantism. Sam warns him that either he helps Andy, or he'll proceed alone.

Dreaming again about his parents, Jason swears he will find the vampires that killed them. He goes to tell Sookie what Hadley told him, emphasizing that they both know vamps can cover their tracks. Sookie, suspicious of well-meaning faeries, asks Jason to show her the nightclub. In the field, Sookie hears noises-and then disappears, before she pulls Jason in too.

Back at Authority HQ, Bill and Eric are hailed as heroes; Russell has been intravenously silvered so he poses less of a threat. Salome refuses to let Eric see Nora--she's confessed to being a Sanguinista. Roman arrives with a special bottle of blood, that of an 18th century hemophiliac, and tells the two he is convinced that they are on the same page. When Salome tries to leave and interrogate Russell, Roman tells her there's no need: He's going to be executed. Roman grants Eric access to Nora upon learning they are related, and he gets Eric and Bill to promise they'll be at the execution.

Now home, Terry explains the curse to Arlene. "You gotta cut me out of your life," he tells her. Arlene, suspecting Terry is off his meds, tries to talk him into staying, but she finally agrees to let him leave.

Andy goes to the Stake House to question Junior, the clerk, about his clientele and merchandise. When Sam enters a few minutes later, Junior keeps his eye on him. Junior offers to show Andy the wooden bullets they stock, and Sam sensing danger, unleashes a crossbow on him. Junior goes down, gun in his hand.

As a vamp feeds on Hoyt behind Fangtasia, a van pulls up and shoots the vampire dead. A masked man runs from the man, and recognizing Hoyt, pulls him into the van.

Sookie finds Hadley inside the faerie nightclub and warns her that the faeries are not what they seem. Sookie doesn't remember Claude, so he explains he helped her escape from Queen Mab; he looks different now because faeries adjust their appearance to their environment. Claude tells Sookie they left Mab before the portal closed. Anxious to learn about her parents, Sookie questions Hadley and Claude. She finds out her parents were ambushed by a vampire who smelled her faerie blood on a Band-Aid.

Russell is removed from the prison and fitted with an iStake. Nora, excited, tells Eric that means God's plan is going into motion--and that Lilith made it possible. Eric realizes then that Nora didn't reveal Russell's location. Before the Guardian and his chancellors, Russell announces he answers to no one--he does what he does because it's fun. Having condemned Russell, Roman triggers the iStake, but it fails to work. Instead, Russell vamp-speeds to Roman and stakes him. "Peace is for pussies," he says.