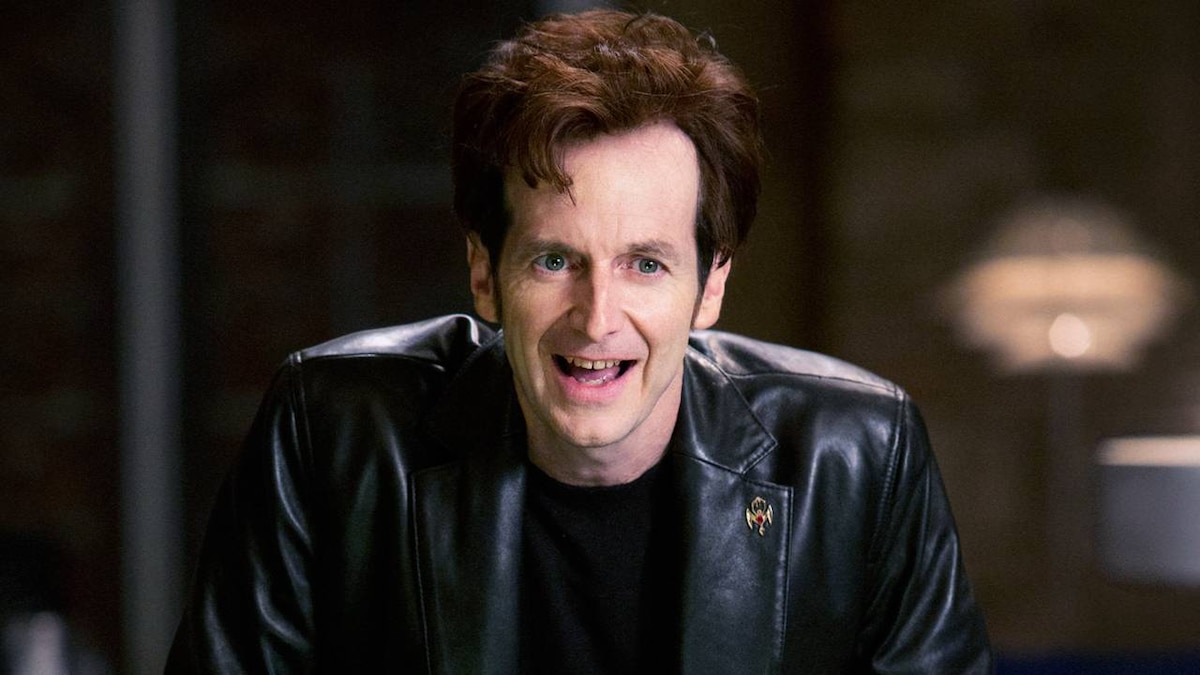 Sookie watches news reports of the vampire crisis; it's been two days since the TruBlood factory bombings. When coroner Mike Spencer knocks on her door, she invites him in--but it turns out he's now a hungry baby vampire. Sookie stakes him with a nearby set of chopsticks. Andy arrives to scoop up the remains and mourns Mike's dedication... before revealing the coroner's foot-related perversions.

Strapped to an iStake, Molly refuses to accept Lilith. She points out that following a thousand-year old text hardly means that vampires have evolved. After she's staked, Russell and Steve attack a frat house, violating Salome's wishes. During a romantic slow dance, Russell promises his new love they will walk in the sun together.

With business down at Fangtasia, Sheriff Elijah suggests Pam and Tara get creative: Repurposing peepshow booths and charging vampires to suck humans. As further insult, he tells them a new Procreation Mandate will require them to up their vampire numbers by year's end. Elijah warns he can seize Pam's assets-and progeny-if they fail to comply. Pam seethes and tells Tara they might need to leave.

A badly beaten Eric is brought in before Nora and Bill. Although Eric protests, Bill feeds him and Nora drops of Lilith's blood. A vision appears, but it's Godric, not Lilith. "Lilith is a godless god," says Godric. As the two watch in horror, Lilith appears and tears open Godric's neck. From afar, Bill watches their reactions and although can't see her, he's pleased that Lilith has triumphed.

Sam and Lafayette stop local customers from taking out Jessica at Merlotte's. Jason arrives shortly after and finds Jessica without her retinue-her guards split when Bill stopped paying them. The two realize they're both there to meet Hoyt. Hoyt sits them down and tells them he's off to Alaska--there's nothing for him there. Hoyt insists Jessica glamour him as a going-away gift: "I wanna go to sleep at night and never dream about you." Jessica hesitates but tearfully does what he asks.

As Sookie packs her things, Jason reels from the sorrow of losing Hoyt and his parents' unsolved murder. Insistent that Sookie wasn't thorough in her search, he looks under her bed again and finds a hiding place under a floorboard. There, they find a parchment with gibberish written all over it. Jason and Sookie go to the local college for help with a translation but the professor thinks they're pulling a prank on him: He's never seen a human language like it.

Luna is convinced that Steve Newlin has her daughter. Sam shows her a promo for a debate that night in New Orleans featuring Steve. On TV, Steve dismisses the concerns of Mortal Rights advocate Congressman David Finch as conspiracy theories: The bombings were not vampire-led, no one wants to return to the old ways, and there is no shadow government leading them. Finch, noticing how healthy Steve looks, refuses to believe he is suffering. Disguised as mice, Sam and Luna search Steve's briefcase for clues about Emma. When he arrives at headquarters, Steve is unhappy that Emma has shifted back to human form and calls her a bad puppy. Still in mouse-form, Sam and Luna sneak out of Steve's bag.

Bill sends guards to fetch Jessica and bring her to Authority headquarters. He tries to calm his angry progeny by explaining she's no longer safe in Bon Temps. Bill gives Jessica the full tour and a copy of the book of Lilith. When he tells her he has been chosen, Jessica is skeptical of his conviction: "This is feeling a lot like the Bible study my parents made me do."

Tara lures Elijah to Fangtasia by claiming she accidentally drained Ginger. With Elijah leaning over Ginger, Tara decapitates him. When Pam sees the carnage, Tara tells her that no one f---s with them in their house.

Eric apologizes to the Authority members for failing to believe in Lilith to begin with. He forgives Russell, his old nemesis, for the murder of his family and is welcomed in to the fold. The chancellors convene to debate how to bring the Book of Lilith to the masses. Russell argues that so long as they fear the daylight, they will never ascend to the top of the hierarchy. He pitches they go after the faeries. When Salome says no-faeries are an abomination, Russell throws her across the room and reminds everyone that he is the oldest and strongest vampire. "I will have the sun," he proclaims and leaves.

Sookie and Jason confer with the faeries about the parchment. Because none of them can read it, they turn to the 500-year-old Maurella, now in an advanced state of pregnancy. Maurella runs her hands over it and translates: It's a contract that promises the first fae-bearing Stackhouse--Sookie--to Warlow.