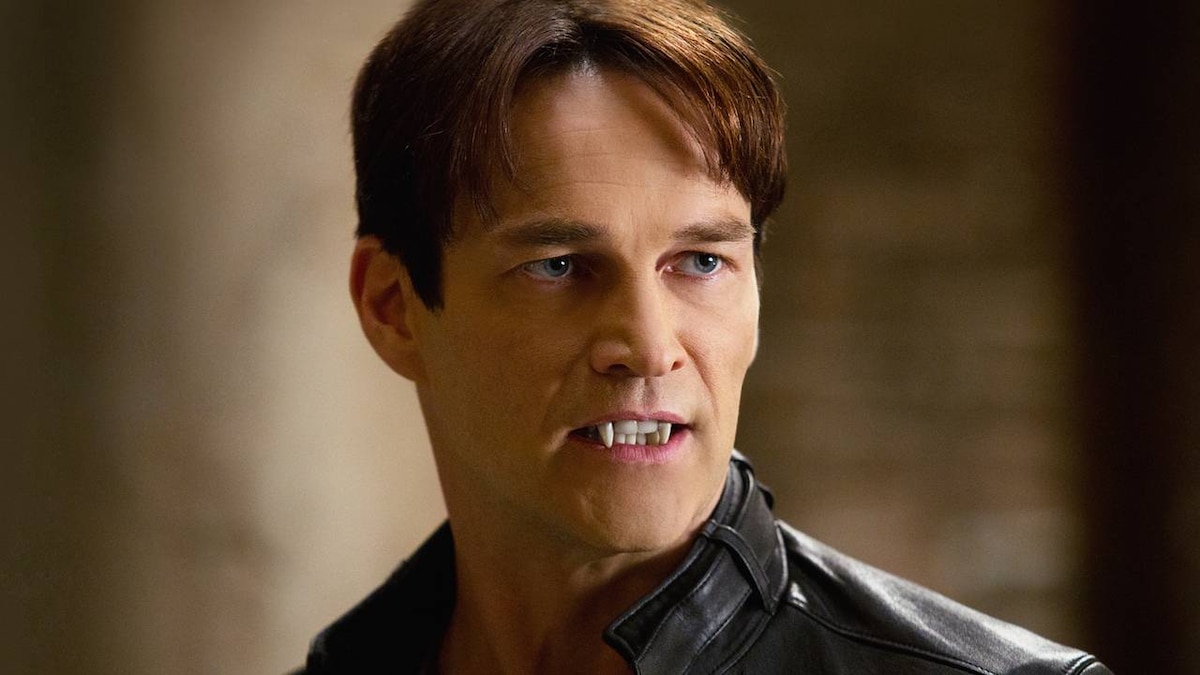 Unfazed by their fingers, Russell taunts the faeries outside of the club... until Eric appears and stakes him. "That felt even better than I thought it would," he says after killing his centuries-long adversary. Steve Newlin disappears into the night.

Sookie runs out to help Jason. Catching a whiff, Nora tries to taste Sookie but Eric stops her. He explains he sensed Sookie was in danger and thanks her for letting him settle an ancient debt. When Eric and Nora return to Fangtasia, Tara tells them the Authority has Pam. Eric goes to his basement hiding place and removes a fortune in cash.

Bill is surprised to be presented Sam for breakfast. Concerned that Sam knows too much, he moves toward him, but Sam shifts into a fly and disappears. Furious, Bill tightens the building's security.

Back home, Sookie tends to Jason, who stares into space. Unbeknownst to her, Jason is listening to their parents. When Tara, Eric and Nora arrive, their father Corbett is upset to learn Eric owns the family homestead. The vamps ask Sookie to join their rescue of Bill, Pam and Jessica, but Jason forbids it. Eric pushes: Bill masterminded the factory bombings. The world needs them. Jason refuses to join in until Corbett points out he can kill more vampires.

Bill gathers the Authority soldiers and commands them to kill any vermin they find and determine if it's a shifter. When Salome asks about Kibwe, Bill confesses to killing him. He tells her Lilith appeared and told him to serve and protect Salome, her chosen one.

Sam returns to the prisoner pens and shifts back. He tells Luna that Bill is beyond reason. Sam leaves to figure out an escape while Luna remains with wolf-pup Emma. When Sam returns again, he whispers his plan to Luna.

Martha interrupts Alcide and Jackson's father-son bonding. She pulls a delirious Rikki from her car; J.D. force-fed the pack V. Jackson administers colloidal silver so she can sweat out the blood faster. Jackson tells his son the only way to take down J.D. is to play by his rules—and he keeps high-quality V around for emergencies.

With Eric, Nora and Tara secured in coffins in the back of Jason's truck, Sookie and Jason load up on weapons at the Stake House. Jason continues his conversation with his parents and within earshot of Sookie, says the time for tolerance is over. At nightfall, Eric appears and asks them to pull over. He takes the wheel so he and Nora can enter headquarters and make it look as if the others are their prisoners.

Andy reels from the news that he's to be a father. Maurella warns him that dishonoring her will be interpreted as an act of war. He takes her to Merlotte's so he can talk to Holly. As Andy confesses to his infidelity, Maurella's light breaks and she goes into labor. Holly unhappily steps in as midwife, ultimately delivering four girls. Once it's over, Maurella tells Andy it is his duty to raise at least half of them into adulthood—and then leaves the babies with the new father.

Luna shifts into Steve Newlin and pulls Emma from the holding cell. Steve-Luna is stopped by Rosalyn, who tells him he needs to go on air right away to do damage control for the fraternity killings. Live on the air, he reads from the teleprompter, but begins to heave violently before shifting back to Luna in front of the cameras. Back in her own body, Luna hurriedly reports that humans are being harvested as food in an underground bunker in New Orleans. Rosalyn heads for Luna, but Sam, disguised as a fly, flies into her mouth and shifts back while still inside her, killing her. Luna passes out.

Aided by the V, Alcide takes out J.D. by snapping his neck. The other wolves kneel down before him and Alcide lays out his rules. "We choose pack," he tells them, adding those who don't should leave.

Sookie, Jason, Eric, Nora and Tara enter the Authority building heavily armed. Splitting up, they start taking down guards and cameras. Eric and Nora override the computer systems while Sookie and Tara free Jessica and Pam. Reuniting, Tara and Pam share a long kiss, prompting an "I knew it!" from Jessica. When Jessica finds Jason, she declares her love for him, but he tells her it'll never happen. Eric and Sookie branch off to find Bill while the others continue on.

Bill enters Salome's room and finds her holding the vial of Lilith's blood. Salome offers her condolences that it was she that Lilith selected and drinks the entire vial despite Bill's warnings that doing so might have adverse effects. When Salome gets sick, Bill reveals that he switched Lilith's blood into a different vial and spiked the one she drank with silver. Moments before Bill finishes her off with a stake, Salome agrees Lilith chose wisely.

As Bill readies to drink the remaining blood, Eric and Sookie arrive. When Sookie tells Bill this isn't him, he calls her an abomination. Draining the vial, he is liquefied into a pool of blood—and then re-emerges as a primal and bloody version of himself.