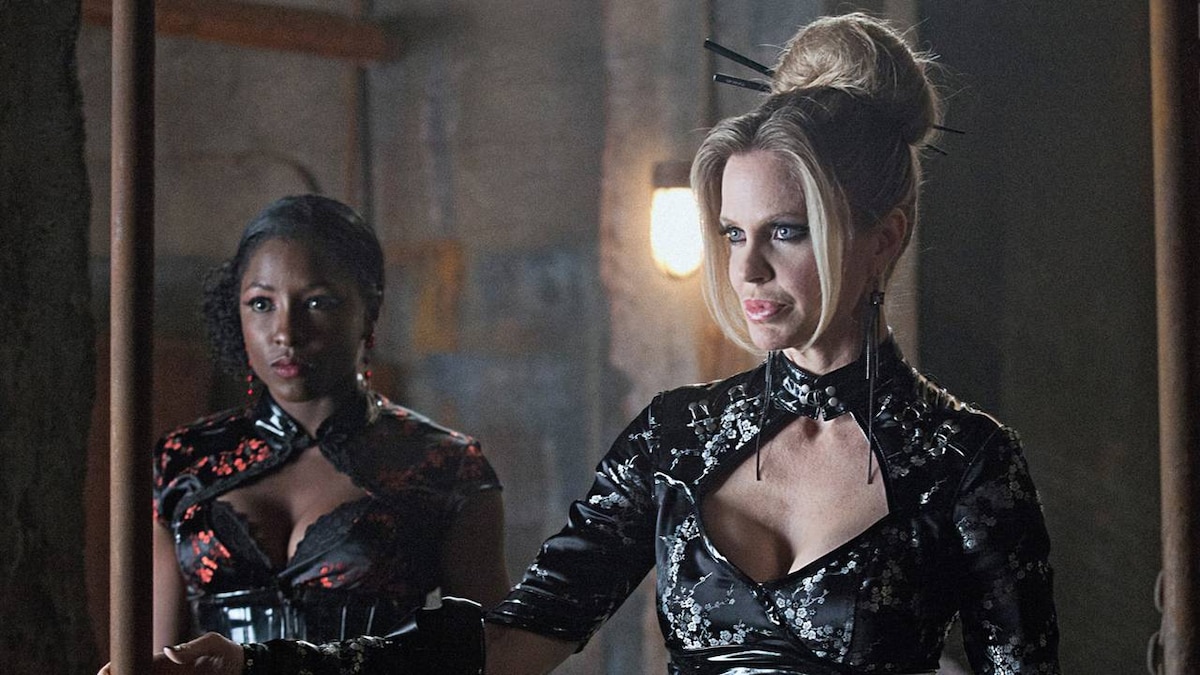 Somebody That I Used to Know

Identified by Sam as a member of the hate-group, Joe-Bob is led way from the hospital in handcuffs. Sam counsels Luna to be patient but she disagrees: She wants to hunt the haters the same way they're coming after them. Luna continues to seethe after Sam leaves and then finds herself shifting into him. Panicking, she steals some clothes and leaves the hospital.

Still high on Lilith's blood, the vampires return from Bourbon Street to Authority headquarters in a state of ecstasy; only Eric is troubled by what's just happened. Salome interprets Lilith's appearance as a sign of her approval. She summons Bill to heed Lilith and feed, but as a man who fathered human children, Bill refuses to drain the young mother Salome has procured. Salome counters if he had loved his own children, he would have turned his dying daughter when she begged him to. Although hesitant, Bill feeds.

Jason tries to talk Sookie out of wasting her faerie powers. He reminds her that if she had been normal, she'd never have fallen in love with Bill or talked to Gran. "Normal's boring," he says, and asks that she reserve what powers she has left-they'll need it.

Realizing that Andy won't get anything interrogating Joe-Bob, Sam volunteers to try it his way. Andy excuses himself-and then finds himself face-to-face with Sam (Luna), in search of himself. The two go to the interrogation room where Sam sees the skin-walking Luna. Watching the two Sams together, Andy mutters, "I hate this goddamn town."

Sookie and Jason go to the faerie club for help finding out who killed their parents. Although wary, Claude agrees: His family has watched over the Stackhouses for centuries. The faeries take Sookie and Jason to the bridge where their parents died. Claude explains to Sookie that she, being part fae, can connect to nature's memory and experience what her mother did. Joining hands with the others, Sookie goes back to that night on the bridge, and relives what happened: A vampire attacked the car and killed her parents. He smelled Sookie's blood on a band-aid in the backseat. Claudine arrived at the scene and unleashed her faerie energy on the powerful vampire. The faeries are confounded that Sookie was able to experience the vampire's memories. Still thinking, Sookie remembers that Claudine called out the name "Warlow," indicating she knew who he was.

A fangbanger hits on Jessica at Fangtasia: "My blood's like a goddamn milkshake." Unable to resist, she leaves with him. Later, Hoyt travels with the hate group to a secluded house where his new friends present him with a silvered and weakened Jessica. The others leave Hoyt alone to kill her. Listing all the ways she hurt him, Hoyt tells Jessica killing her wouldn't be murder. Although Jessica can't explain why she stopped loving him, Hoyt doesn't kill her. Instead, he takes out Reggie, the fangbanger who lured Jess, and goes for help. Because it's daylight, Jessica can't join him. Walking for hours, Hoyt flags down a pickup truck. The unseen driver points a gun at his face.

Sam, followed by Andy, and Luna-as-Sam, bursts into hate group's hideaway and finds Jessica by herself. Luna picks up the scent of a human woman with a bad diet, before collapsing. Sam takes her to his trailer and tends to her there. When he gives her a kiss, she shifts back into her own body.

At the Shreveport wolf-pack gathering, J.D. hijacks the introductions to announce he and Alcide will be competing for packmaster the old-fashioned way: Capturing and killing a human. To ensure that the challenge is fair, J.D. assures the group that their prey is a local track star, J.D. and Alcide will hunt in human form, and they're giving him a head start. To save the boy, Alcide forfeits but J.D. decides the hunt will continue regardless. Alcide tries to take on J.D., but can't overpower him when he's amped on V. But Martha stops J.D. from killing Alcide; it'll tarnish the pack. J.D. agrees but instructs Alcide to find a new pack.

Tracy, the local boutique owner, sits at the bar at Fangtasia. Recognizing Tara, she finds out her old classmate is now a vampire. "Now you're a member of two minorities," she says condescendingly. The two tangle verbally until Pam orders Tara to rein it in. Later that night, Pam surprises Tara with a bound and gagged Tracy. Pam glamours the terrified girl into wanting to be fed upon, and tells Tara to have at it.

Arlene and Holly turn to Lafayette for his help but he refuses to get involved with Terry's Ifrit issue, "I'm in the 'f*** off while I smoke a blunt business," he says. Arlene continues to plead: Terry needs to be convinced he isn't cursed and being hunted by the fire monster. Lafayette finally agrees-but it'll cost them $300. Arlene tricks Terry and Patrick into meeting her and then calls upon Lafayette to make contact with the woman Terry killed. Although prepared to fake his way through it, Lafayette really does feel her presence. He delivers her vengeful message: Either Terry or Patrick needs to die.

Eric tries to talk sense into Nora, invoking Godric's philosophy: "He saw potential in us, potential to change the world." Nora disagrees and calls their maker a "blasphemer." As the rest of the Authority leaders debate world domination, Russell and Steve flirt. Bill makes a suggestion: Destroy the TruBlood factories and force the vampire population to feed. Shrugging off Eric's shock, Bill tells him he's evolving.

In her bathroom brushing her hair, Sookie is terrified by a form that emerges from the mirror. "I'm coming for you," it says.