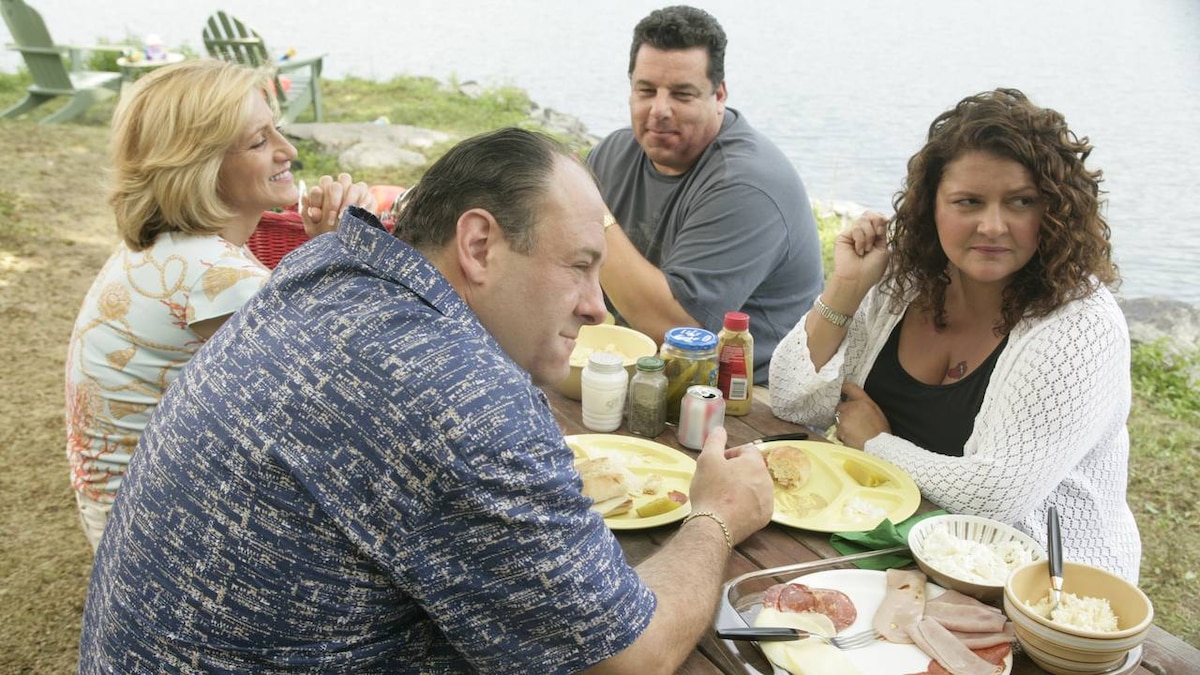 "My estimate? Historically? Eighty percent of the time it ends in the can like Johnny Sack. Either that or the loading dock at Cozarelli's."

Flashback to 2004: Tony is outside Johnny Sack's and takes off through the woods as the Feds approach. He tosses his gun in the snow. From a neighbor's upstairs window, a teenaged boy watches. Later that night, the kid digs through the snow to find the gun and fires it - a new toy.

Six AM on a 2007 morning, the Soprano family is roused from bed by the cops banging on the door. "Is this it?" Carmela asks. It's the Essex county cops with a warrant for Tony's arrest on a weapons charge: an illegal firearm containing hollow point ammunition.

Tony is arraigned and bail is posted. Turns out a punk kid, pulled over by the cops, was found with drugs and the weapon - and "to beat the rap" as Tony's lawyer points out, said that it was Tony Soprano he saw toss the gun three years ago.

Meanwhile, Phil Leotardo is celebrating his own homecoming from the hospital. He hears the news: "Porkchop out in Jersey, got pinched on a weapons charge."

Family and friends greet Tony at home later that day - with the notable exception of Christopher. Bobby talks Tony into coming up to the lake house for his birthday to spend the weekend with him and Janice. On the car ride up he gets an early birthday present in the form of a call from his lawyer Neil Mink: the charges have been dropped. What he doesn't know is the Feds leaned on the local prosecutor: "Can you really not be aware we've been building a RICO case against Tony Soprano for 5 f**king years? And then you blow this popcorn fart?"

Up at the lake house, Carmela and Tony greet their favorite niece, Nica. Bobby takes T out to the woods for some target practice against a tree and gives him his birthday gift: an AR-10 automatic machine gun. "I wouldn't use a firearm like this on a deer, it's unsportsmanlike," Bobby explains. Lately, he's been using a bow and arrow exclusively: "It levels the playing field."

Relaxing by the lake, Janice waxes poetic about her new life and her new peace with Tony. "You've really changed," she notes. "So I had to change?" he bristles. Watching Nica play with the nanny, Tony nudges Carm to tell the story she heard about the unattended child nearly drowning in a pool with the adults all around - now brain dead. "I can't get that story outta my mind. I don't know why," he says.

Tony gets a birthday blow job from Carm before taking a motor boat ride on the lake. While back at the Soprano's house AJ is skipping work to hang out in the master bedroom suite with Blanca and host a pool party.

Janice expounds on the lessons she's learned in psychotherapy (that her mom was a "splitter," pitting her kids against each other) reviewing her epiphanies about her childhood as Carmela patiently listens. Out on the lake, Tony, feeling his age, talks about the business and notes that notes that Bobby never "popped his cherry" with taking somebody out. Tony confides his disappointment with "the guy" he's been grooming should anything happen to him and hints Bobby might be next in line.

Over multiple toasts, T salutes his family and enjoys his gifts. As the evening progresses, ("We're out of grappa, how about some Remy?" Bobby asks) they go from conversation to karaoke to a vicious game of monopoly. As Janice continues to tell embarrassing family stories, Tony gets furious when she surprises Carmela with a story of their father shooting a gun at their mother's head coming home from the Copa, and just grazing her beehive hair-do. When Carm asks why he's never told that story T snaps, "Cuz it makes us look like a f**king dysfunctional family. Jesus Christ!"

Tony taunts Janice when she draws the "second prize in a beauty contest," card and Bobby defends his wife's honor. T apologizes, but when he hums "Under the boardwalk, with your schlong in Jan's mouth," Bobby explodes and attacks his brother-in-law. Janice and Carm struggle to pull the men apart and Carm gets knocked over. Bobby finally takes Tony down.

Carmela gets Tony up to bed but then can't budge him and passes out in a bunkbed next door. Awaking at 4 am, T stumbles into Janice and Bobby's room, and mumbles; "You beat me fair and square."

The next morning, Carm, uncomfortable with the night before, is packed and ready to get on the road. But Janice, not wanting things to be tense with Bobby and the boss, urges them to stay. Bobby reminds Tony they have that "thing later, with the "Canucks" and Janice urges: "It's a sin to waste food," offering up a frittata.

As Tony broods down by the lake, Carmela berates him for still sulking but he's feeling his mortality as he recalls the days when he could have taken Bobby, no problem. Tony complains how he had to sacrifice his friendship with Johnny Sack to get Janice and Bobby their house. When Christopher calls to wish him a belated happy birthday, Tony hangs up on him.

Tony and Bobby head out to "play golf" leaving Carm and Janice alone. As Janice continues to make digs about her brother's temper, Carmela finally defends him. "Tony is not a vindictive man," she tells her sister-in-law as she storms off.

The Canadians offer a deal on pharmaceuticals that's priced a little high for Tony. Then one of them mentions a problem he has to take care of - the deadbeat father of his sister's child trying to get custody of the kid. Tony offers: "We can make sure your sister's custody problems go away," in exchange for lowering their price. They agree.

As they're leaving, Tony tells Bobby, "You'll take care of this, right?" A surprised Bobby agrees. "No bows and arrows now," Tony nudges.

They return to the girls who greet them eagerly, and Tony says they should hit the road for the drive back. Carmela happily agrees.

Against Janice's protests, Bobby heads out for a few days to take care of his assignment. He tracks down the young father at a laundromat and shoots him dead once in the chest and a shot through the head, as the guy grabs a piece of Bobby's shirt. Bobby drops the gun in the hallway as he staggers off.

Back home, Tony watches the old home movies Janice gave him as a birthday gift, their childhood selves vying for attention and power of the garden hose. He gets a call from his lawyer, Mink. The Feds have taken up the gun charge, it hasn't gone away after all. "The good news is, if they had what they needed, we'd be having this conversation through glass."

Returning home to Janice and their guests, Bobby hugs his little girl tight as he looks out at the lake.