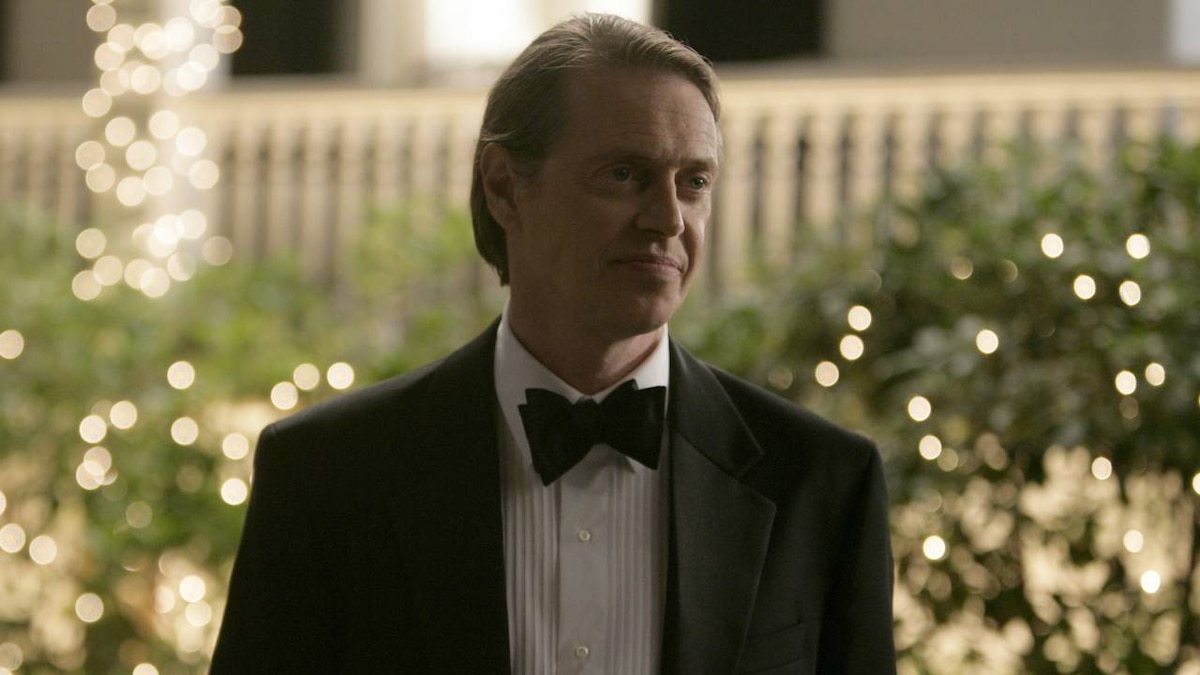 Like they say, 'With great power comes great responsibility.'

Vito pulls alongside Paulie's car on a deserted street and hands off a tip "Colombian's knock off at noon." But when Paulie and Cary De Bartolo show up, the place isn't empty. After a fight and a bloodbath, Paulie and Cary ransack the place and find a dishwasher full of cash.

At the hospital where the family is still sitting vigil while Tony fights for his life, Chris and Bobby confront AJ about trying to buy a gun. They are sympathetic to his anger but warn: "you can't go there," and tell him to channel his anger elsewhere.

Back in Costa Mesa, Tony finds a summons for Kevin Finnerty from the Crystal Monastery. He goes to the Monastery looking for help finding Finnerty but they don't believe he's not their man. Tony returns to the hotel bar and confides to the bartender he was diagnosed with Alzheimer's and asks if it's possible he is Kevin Finnerty.

Carmela runs into Dr. Melfi in the grocery store. The shrink offers her help but Carmela puts her off: "I have plenty of people around to talk to."

Silvio confides to his wife Gabrielle that he's a reluctant acting boss-he was quasi-offered the job before T but has never seen himself that way. "I'm more behind the scenes-advice, strategy."

But Silvio has to step up. Bobby and Vito are still fighting over who's taking over the Roseville .Silvio gives it to Bobby-kicking up 20 percent to Vito for "the time being." Next, Silvio rules from the throne as Paulie and Vito argue in the men's room over how to split the million dollars from the Colombian take down. "It breaks half and half and you both kick Carmela's share to me to deal with."

As the recovering addict and degenerate gambler/screenwriter JT gives a talk at the Writer's Guild, Benny and Murmur walk in, slam him in the head and whisk him off to a back-seat meeting with Christopher. A deal if offered: If JT pens Christopher's movie idea - "it's Saw meets Godfather 2" - he'll wipe his debt. Christopher gives him until the next day to develop a pitch to present to an investor's group. At the meeting, hosted by Little Carmine, Chris introduces the set up: "It's about a wise guy with a big mouth and bigger dreams." As JT tries to tell the story the skeptical investors interrupt with commentary and critiques.

After dinner with their wives, Vito feels out his cousin Phil Leotardo about shorting Carmela-it's "money down the drain" if Tony dies. "It's temping but you can't think that way," warns Phil. Paulie is equally uninterested in handing over his piece of pie to Carmela, but as Little Paulie says, "the boss's wife, what can you do?"

In Costa Mesa Tony's calls home but can't bring himself to reveal his Alzheimer's diagnosis. He's found a flyer for the Finnerty family reunion in his briefcase and decides to go and confront his doppelganger.

Carmela blows up at AJ when she sees a news story where AJ's quoted saying "Growing up Soprano? It's just plain weird." After her meltdown, Carmela goes to see Dr. Melfi for help dealing with AJ. But Melfi pushes Carmela to talk about how she's doing, and Carm talks about her guilt over making her kids complicit in how Tony makes his money. Plus -- there's the issue of whether she really loves Tony.

Silvio's feeling the pressure, and Gabrielle pushes him to be getting more compensation. And when Bobby comes by to complain again about having to give 20 percent of Roseville to Vito, the combined stress makes Silvio's asthma kick up and he's rushed to the hospital. With Silvio and Tony both "on the canvas" Vito has his eyes on the boss's job.

At the hospital Finn arrives to be with Meadow just as Paulie's talking makes Tony's blood pressure drop and he goes into cardiac arrest. The doctors rush in with the paddles.

Back in Costa Mesa, Tony arrives at the Finnerty reunion. They've been expecting him. Confused, he hears a little girl calling "Don't go Daddy."

In the ICU Meadow calls out to her father. Tony surprises everyone by not only coming back to life, but waking up. He's back.

Paulie hands over the cash to Vito and tells him they have to get their cuts to Carmela now. "Tony's conscious, do you capice?" When they hand it over, Carmela sees through the timing of their generosity.