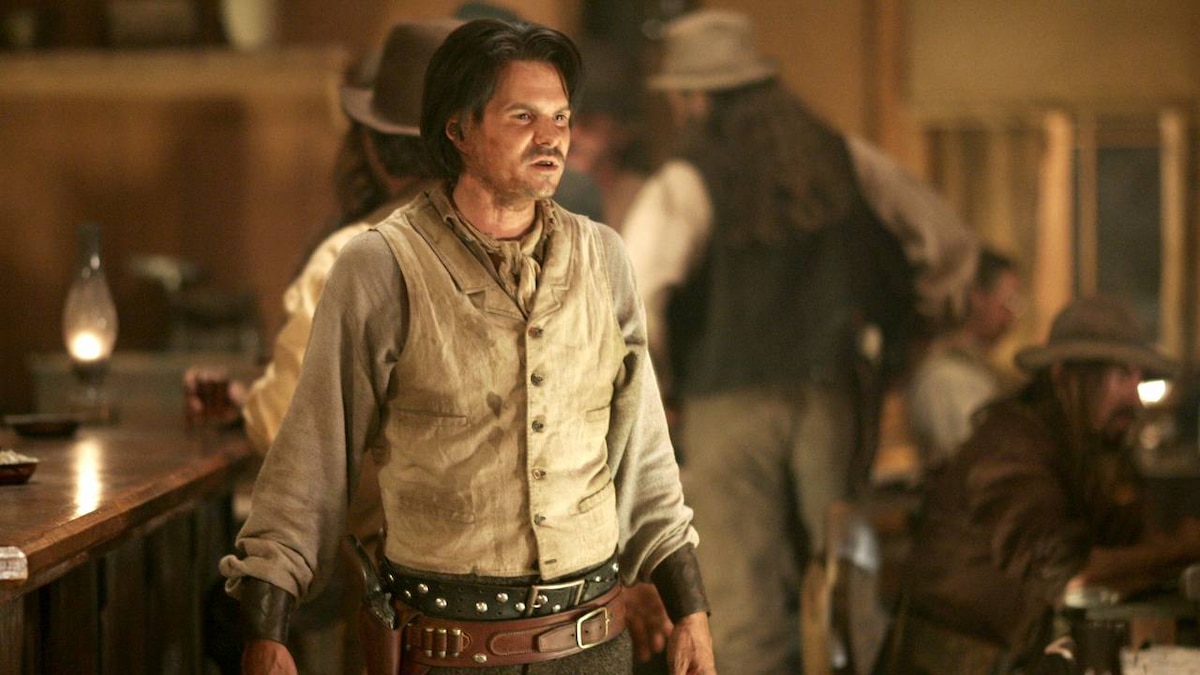 Requiem for a Gleet

Martha and Seth Bullock wake up together and Seth, intent on starting his day, is lured back to bed by his wife, to have a "conversation."

At the Gem, Dolly and Trixie minister to a desperately ill Al Swearengen, who sweats and shivers and moans as the two whores mop his brow with cool water.

Wolcott is confronted by Ellsworth, angry that Wolcott's been snooping around Alma Garret's gold claim without permission. His anger is further motivated by the fact that Wolcott, in mining the Comstock claim years earlier, had caused the death of 46 miners.

At the Grand Central, Alma Garret formalizes her firing of Miss Isringhousen, but offers a generous severance package. Alma tells her: "Cotton Mather would have found hard and joyless the standards you so resolutely apply to me, and Sofia, and of course to yourself."

The local thug known as Crop Ear comes calling on Swearengen for assistance in a criminal endeavor he plans. Dority tells him Al is away and to come back the next day, but that evening, Crop Ear is back, drunk this time, and irritating in the extreme to Dority. So irritating, in fact, that Dority slits his throat and then tells Burns: "Crop Ear's dying up there. Take him to the Chinaman and throw him away."

Wolcott's favorite whore Carrie arrives in town, and when Wolcott asks he if can help her with her bags, she says, "No, you can't. Or look at me or talk to me 'til I've took a bath." Arriving on the same stage is Hugo Jarry, the Lawrence County Commissioner, who immediately seeks out Cy Tolliver at the Bella Union, where Tolliver is negotiating to buy a gold claim from a prospector.

At the Chez Ami, Joanie Stubbs and Maddie argue over Joanie's encounter with Wolcott. Maddie is angry because she feared Joanie might kill Wolcott, whom, she describes as "a cruel and evil man," adding that "Before I go, I intend a long and comfortable retirement, and that cocksuck's going to pay the freight." At that very moment, Carrie arrives at the Chez Ami and says to all within earshot: "This whole place smells like shit."

Silas Adams goes to the Gem to tell Al that Jarry is in town and up to no good. Asking Dority if he can speak with Al, the usual friction between the two kicks in, prompting Adams to ask: "Is there any fucking chance you and me don't end in blood?" After more harsh words, Dority lets Adams know that Swearengen is seriously ill.

Alma Garret meets with Ellsworth and asks him about the rumors that Deadwood's gold claims may be in jeopardy. "Panic's easier on the back than the short-handled shovel," Ellsworth replies, explaining that rumors seem to accompany gold. He also tells her his suspicions about Francis Wolcott: "Nor the sort'd shrink from a lie, or more than one, to advance his purpose, or be ignorant how to circulate his falsehoods without others knowing their source."

Upstairs at the Gem, Doc Cochran attends to an ever more desperate Swearengen. Unaware if Al can even hear him, Cochran says: "We come to a crises Al, and I have to say my piece." The options are not appealing: surgery to cut into the bladder and remove the stones, entering either above the penis or below it. Two of ten men survive the surgery, Cochran acknowledges, but "at what point, absent intervention, will your condition so deteriorate as to put you beyond recovery? I believe," Cochran adds, "that point approaches."

At the Bella Union, Commissioner Jarry tells Tolliver and Wolcott of new rules that will apply to gold claims in the territory. Claims pre-dating the treaty with the Sioux will be deemed legitimate, and those filed afterward will be considered on a case-by-case basis. Overturned claims will be awarded at set prices, via lottery. Tolliver, hearing this, responds: "Better tell your friends and relatives to pick their lucky suits out for that drawing." To which Jarry-revealing at last his true loyalty-responds: "Only after Mister Wolcott's have picked out theirs."

Jarry suggests that once people learn of his presence in Deadwood, those afraid of losing their claims altogether may sell out and leave anyway. "Would that argue for allowing word of my presence to circulate a bit before I present myself officially?" Tolliver's response: "A man might use that time to put some stink on his Johnson."

Trixie visits Star at the hardware store to say she can't concentrate enough to sit for her accounting lesson. Weeping over Al's deteriorating condition, she tells Star: "He's too sick, maybe he'll fucking die but I can't stay, though it'd be smarter to stay and to learn to calculate fucking interest on that accommodation paper or discount notes or whatever the fuck." Seeing Bullock arrive, whom she dislikes intensely, she abruptly departs.

Star tells Bullock that he has news from Denver about their proposal to start a bank. They must provide 15 percent of their proposed capitalization-$300,000 if they capitalize at $2 million-in order for Denver to underwrite their proposal. Star says Denver officials suggested they'd credit widow Garret's account as collateral, an idea Bullock flatly rejects. When Star says Swearengen would put up the money, Bullock winces, indicating he wants "reputable people." Star's response: "If money had to be clean before it was recirculated we'd still be living in fucking caves."

Cochran, preparing for surgery, is outraged by Burns' suggestion that he have a whiskey to help steady his hand. "Whiskey does not steady the hand," the Doc replies. "It just dulls worry over the hand's unsteadiness." At the last minute before beginning surgery, Cochran decides to again insert an instrument into Al's bladder to dislodge the stones. Afterwards-with Dority and Burns on either side of Al-they get Swearengen to his feet and shout at him to pee. To everyone's amazement, he does, and blood, urine and kidney stones pour out of him. No one is more relieved that the Doc, who says: "God bless you Al, and thank you for saving me,"

A distraught Mr. Wu comes to see Al but is sent packing by Dority, who has difficulty understanding what he wants. A distraught Miss Isringhausen calls on Adams and convinces him that she's afraid for her life, that the widow Garret is going to kill her. "I know it seems impossible," she says, laying the groundwork for a plot, "but I can testify to you Mister Adams, I would not be the first she's killed."

Miss Garret, in an encounter with the despised Farnum, tells him she wants to buy his hotel. And Wolcott tells Tolliver that a new Chinaman in town-Mister Lee-will now provide opium to Tolliver to sell in the camp, and that Tolliver and Mister Lee will split the proceeds from gambling and prostitution at a new place called Celestials' Alley.

Wolcott visits the Chez Ami and has a sexual encounter of sorts with Carrie. She sits atop the fully clothed Wolcott and he orgasms almost immediately. "I'm too quick," he says to Carrie, who responds, "You can't be too quick for me." And then she says to him: "You might try sometime with your prick outside of your pants."