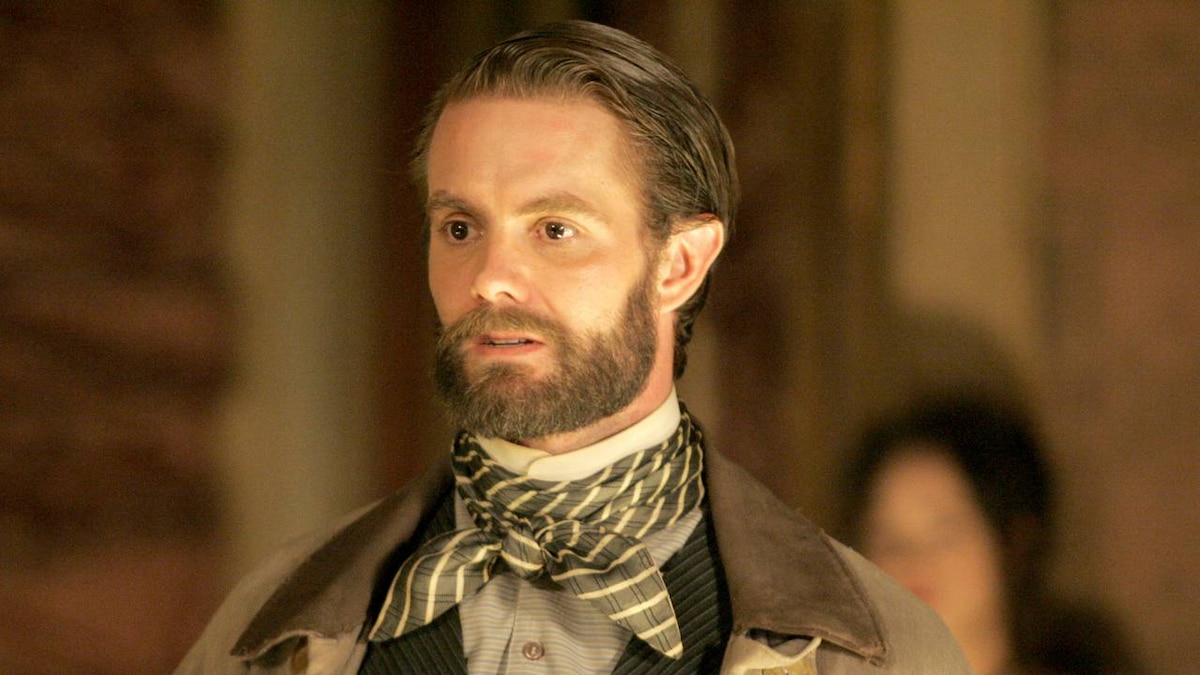 Francis Wolcott, agent for the mining magnate George Hearst, arrives in Deadwood and is immediately fawned over by Farnum, who-not knowing who he's up against-sees in Wolcott's fancy leather bags and his stated intention to "locate and secure an assortment of claims" an easy mark.

Observing them across the dining room during breakfast at the Grand Central are Joanie Stubbs and Maddie, who it turns out, knows Wolcott. After watching the interaction between Farnum and Wolcott, Maddie offers a prediction: "The man the Mayor expects to digest is going to toy and play with Mister Farnum from camouflage for as long as he finds it amusing and then make him a meal of his own."

Across town at the Bullock resident, Martha and Seth sit down to breakfast, both with regrets over things said the previous day. "Representations I made, as to letters I'd written. I didn't," offers Bullock. "I'll be grateful," responds Martha, "if you'd not rely on my assurance I got them." And then she adds, "I'll hold my deepest gratitude Mister Bullock for what will let us live, as we are now."

At the Gem, Swearengen is in a bad way, lying on the floor suffering from septic shock and kidney stones, barely able to speak. Because his reign is one of fear, his minions are reluctant to intrude when he fails to appear in the morning and ignores their knocks on his door.

Bullock visits the Grand Central to call on the widow Garret. Richardson goes to fetch her but returns with Sofia and Miss Isringhausen instead, who informs Bullock that Alma is visiting her claim. She returns Bullock's timepiece, and though he is taken aback by the meaning of the gesture, he presses ahead with the message he'd intended for Alma, hoping to convince her to give up her child and depart with him: "As few children as are in the camp, certainly , if she decided it was appropriate, other parties would be delighted, and grateful."

Maddie tells Joanie who Wolcott works for, and says that were it not for Wolcott's offer to pay for one of Maddie's girls to come to Deadwood that she herself might not have come. Wolcott, it seems, is "a specialist," someone, that is, who likes his sex a bit kinky. In Wolcott's case, he's a sadist: "Mister W enjoys being cranky with his women, but sometimes when disappointed, his crankiness runs away with him," Maddie says.

Farnum, as yet unaware of Wolcott's eminent employer, wastes no time trying to run a con on him. For $10,000, he offers to sell Wolcott the letter written by Wild Bill Hickok that he's been holding, telling Wolcott that just before Hickok died, he revealed to Farnum that he'd discovered a quartz deposit which, in Bill's words, promised "wealth beyond counting." "How much wealth is that?" Farnum asks. "I don't know Mister Wolcott. I don't know how high Bill could count."

Later, Wolcott returns with a cash-filled envelope and buys the letter, to the amazement of Farnum, who has no idea he's being set up. Later still, Wolcott returns again, feigning distress over having read the letter and found no mention of a quartz deposit. Farnum is disinclined to return Wolcott's money, but sits up straight when he learns that Wolcott purchased the letter as an agent for George Hearst. Farnum is apoplectic, and readily agrees to serve as Wolcott's agent in a scheme. "This service would enlist you and one or two others circulating certain rumors about the future of the camp," Wolcott says. "In particular, about the validity of the present titles to the claims." "Consider me enlisted," Farnum replies.

At the Gem, Doc Cochran, with Jewel's help, persuades Dority that Swearengen may be in dire straits, and that his door must be broken down. Once inside, Cochran indeed finds Swearengen in a puddle of sweat on the floor, incoherent from septic shock. Cochran, fearing kidney stones may be causing Swearengen's bladder to back up, inserts a device through the penis and into the bladder, and relieves some of the pressure. Swearengen's agonizing cries echo through the streets of Deadwood, giving pause even to his enemies.

Wolcott calls on Cy Tolliver at the Bella Union, who treats him rudely until discovering that Wolcott works for George Hearst. Wolcott, an odd duck who doesn't like to be touched, waves away Leon and Con Stapleton when Tolliver starts to introduce them. Wolcott wants the same thing from Tolliver that he wanted from Farnum: the rumor spread that Deadwood's gold claims may not be valid.

The widow Garret surprises Ellsworth when she tells him she wants to buy the Grand Central Hotel. "I can think of better locations Ma'am, with friendlier views." "None," she replies, that would offer the further pleasure of putting Mister Farnum in the thoroughfare." Ellsworth tells her that "most of us got enough luck to be too broke to act on them-type ideas. The type the low-born would say we get when we're pissed off, though with my own aristocratic lineage, I use the term 'sore-disappointed.' " To which Alma replies: "I am pissed off."

Stapleton and Leon take Tolliver's bait following his bizarre, rambling speech to the Bella Union's staff about people who might want to apply for severance and leave his employ. When they inquire as to the meaning of the outburst, Tolliver tells them of the "rumor" that Deadwood's gold claims may be invalid.

Trixie shows up unbidden at the hardware store and asks Star if he'll teach her how to keep books. "I'll pay you, or you can take it out in c*nt," she tells him. "I won't teach you if you keep that up," Star replies, a judgment that angers Trixie. "F*ck every f*cking one of you. I wish I was a f*cking tree," she says, exiting angrily.

Maddie welcomes Wolcott to the Chez Ami, where he's gone in search of the whore Carrie, whose passage to Deadwood he'd arranged. He is irritated to learn that she's has "been detained." When Joanie offers to f*ck him "for free," he tells her "you ain't my type," but nonetheless repairs to a private room with her. Forewarned by Maddie of his violent nature, Joanie is armed for the encounter-a Derringer hidden in her waistband. Unable to arouse Wolcott with conventional means, Joanie struggles to locate the nature of his desire, but he remains a mystery to her. Shortly, he dismisses her, but not before surprising her further by saying he admires that she came armed to their encounter.

The widow Garret, irritated by what she perceives as Miss Isringhausen's judgmental attitude towards her and the way she conducts her affairs, fires the young woman. "I'll say good night then" Miss Isringhausen says. "As is your custom," Alma points out, "without having spared one affectionate look for my child." "My training, Ma'am," Miss Isringhausen responds, "is that, being engaged to see to the child's education, my soliciting her affections would intrude on the mother's province."

Calamity Jane, in an encounter with Trixie, learns that Swearengen has a soft side she had not expected. According to Trixie, the reason Swearengen keeps Jewel around is not as a cheap trick for those unable to pay full freight. It's to protect her. "There's entries on both sides of the ledger is the f*cking point," Trixie says.

Farnum, doing Wolcott's bidding, spreads further unrest by sharing Wolcott's "rumor" with Richardson, that Deadwood's gold claims are being overturned. Transparent as ever, Farnum then gives Richardson the night off and warns him to "confide in no one."