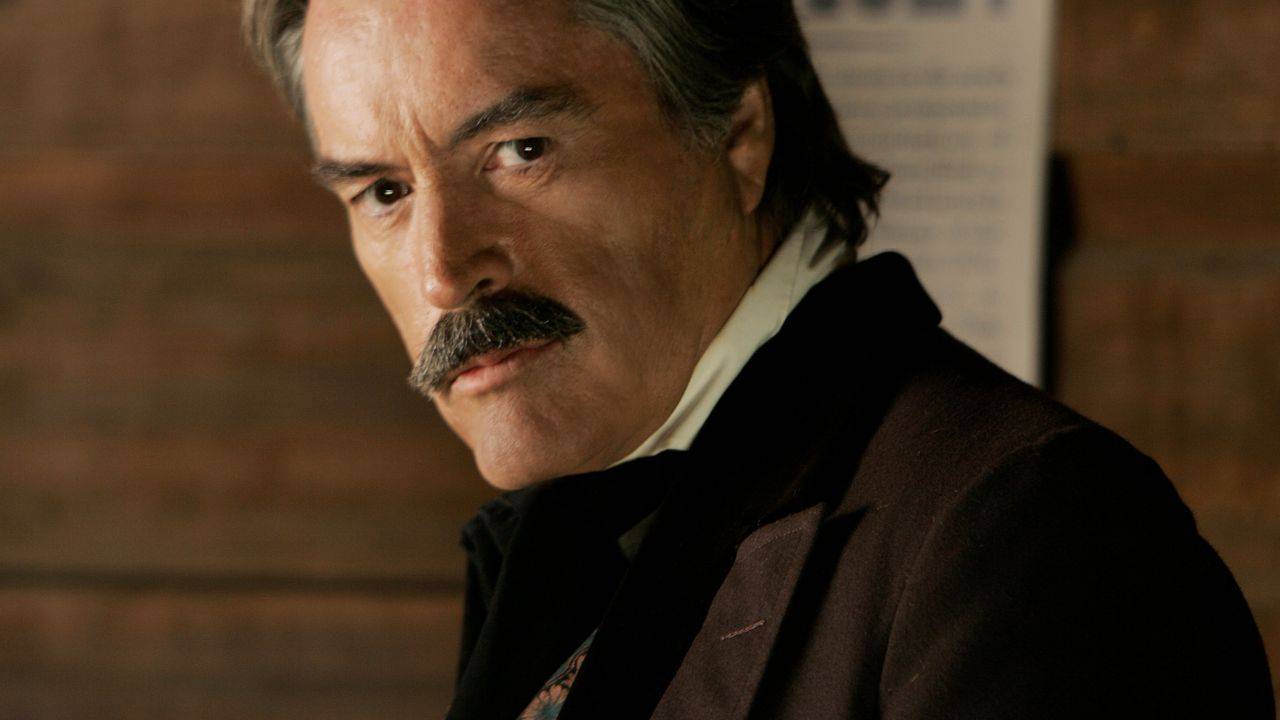 Al Swearengen returns to the land of the living, opening his eyes at last to find, hovering over him, an anxious Dority, Doc Cochran and Burns. "You fuck me while I was out," he asks Dority. " 'Cept for talking a little cockeyed," Burns observes of Al's slurred diction, "Al is back to his accustomed self."

Swearengen at the moment is more interested in how he looks, and whether Bullock looks worse. Dority warns him that much has gone down while he's been incapacitated: "You got to bring all your fucking wiles to bear Al, 'cause developments need interpretating on every fucking front."

Swearengen discovers his right arm is partially paralyzed although when Cochran asks if he can use it at all, Al manages-through sheer exertion of will-to raise his arm from the bed. Cochran's reassurance-"That's a good sign, Al" only irritates Swearengen. "Do not talk to me that way," Al warns. Based on the blood pooled in his eye, his uncertain speech and his partial paralysis, Cochran concludes that Al has had a small stroke. Unwilling to show weakness, Swearengen order the Doc to "keep bullshittiing" the rest of Deadwood and threatens him that "If this gets out, I'll slit your fucking throat, and I wield the blade good with my left." Cochran assures him the secret is safe. Al insists, "If I need it, you fucking kill me."

At the Bella Union, Doris brings Tolliver his share of the weekly proceeds from the Chez Ami. Tolliver is both impressed and depressed by the amount. "You wouldn't s'pose they'd be salting the fucking find over there, now would you Doris?" Doris pleads ignorance, but Tolliver does learn from her that Wolcott has abused her. "There's a man with a problem, ain't it Doris." And to himself, hatching a plot: "Jesus Christ. Can I be that fucking lucky."

County commissioner Jarry, newly arrived, pays a call on Merrick, insisting that he run, on the front page, what appears to be a legal notice. Written in impenetrable legalese, it purports to call into question the legitimacy of Deadwood gold claims, although a careful reading by Merrick leads to the conclusion that the statement means not much of anything.

At the Grand Central, Farnum rehearses his lines turning down the widow Garret's offer to buy his hotel. Suddenly Garret arrives in the lobby and inquires if Richardson can accompany her on a few errands. At the hardware store she finds Trixie, being tutored in bookkeeping, and sharp enough to quickly discern the nature of Alma's visit: "Are you knocked up?" When Alma admits she is pregnant, Trixie inquires as to why she hasn't taken "your tale of woe to the Doc?" Alma explains that a childhood ailment may have made rendered her incapable of having children, and that she hasn't sought out Cochran as she fears he may have judged her harshly when she was a drug addict.

Trixie, an old hand at abortions via a botanical concoction, is hardly reassuring: "I can tell you this much Mrs. Garret-if you take the tea, lay plenty of dope in beforehand, 'cause I've killed seven and every bleeding out I laced on good and tight and for a good long fucking while after."

Angrier than ever, Trixie storms over to Doc Cochran's office, telling him that Alma, in need of help, is reluctant to call on him because he was judgmental during her opiate withdrawal. "I'll call on her," Cochran says. "On some other fucking pretext," Trixie insists. As Trixie departs, Cochran shouts after her: "You have as miserable a disposition as your employer." Later, however, under the guise of checking up on young Sofia, Cochran visits the Alma Garret, but finds she is not yet ready to reveal the nature of her predicament.

Miss Isringhausen seduces Silas Adams at the Grand Central. When Adams is apologetic afterwards, he is assured: "You took no more advantage of me, Silas, than the Samaritan did the traveler from Jerusalem." She also tells Adams that the widow Garret claims she hired Al Swearengen to murder her husband, and asks if Adams will introduce her to Swearengen. "Why do I feel lucky," says an incredulous Adams, "we didn't meet across a poker table?"

An African-American named Samuel Fields but known as Nigger General, returns to Deadwood and pays for a mount he'd rented weeks earlier from a livery stable owned by another African American, Hostetler. Encountering Calamity Jane, who as usual is hitting the bottle, Fields asks if she'll sell it to him. "You ain't buying it but you can have a fucking drink."

At the Bella Union, with Jarry observing, Wolcott peruses the bills of sale for gold claims Tolliver has bought from miners spooked into selling cheap by the rumors Tolliver has spread. The claims, of course, are intended for Wolcott's employer, George Hearst. Jarry notes that Merrick resisted running in his newspaper an "official" statement from Yankton that Jarry pushed on him. "That the Yankton statement might cause unease among the local claimholders as to the security of their titles, Mister Merrick found personally distressing," Jarry notes. And so it is, they learn moments later, when Tolliver's man Leon interrupts to say that "people are fucking riled." They want "to know where he is and who the fuck he thinks he is," he says, indicating Jarry.

The locals indeed are restive. "New county commissioner give Merrick a fucking 'statement' mitigating us into an ass-fucking," says one. Burns, observing the growing tumult from Swearengen's balcony, informs Al that trouble is brewing, and also that the county commissioner is in town. When Swearengen learns that the commissioner is at the Bella Union, he surmises-correctly-that Tolliver and the commissioner are in cahoots, and orders Dority to fetch Bullock at once. When shortly Bullock arrives at the Gem, Swearengen tells him he doesn't want Jarry harmed, and asks Bullock if he's aware that Jarry and Tolliver are allies. When Bullock replies no, Al tells him: "Bedridden I know more than you." Swearengen's concern is that if the government knows Jarry is allied with Tolliver and harm befalls him, Al will take the blame.

The crowd, angry now and in possession of the knowledge that Jarry is in fact inside the Bella Union, heads over without further ado. Finding Jarry inside a cashier's cage, they turn it over and fall upon Jarry, with every intention of doing great harm until Seth Bullock arrives, firing into the ceiling to restore order.

The mob, thwarted, turns its anger on Fields, who's taken refuge under the hay in Hostetler's livery shop. Flushed out of hiding, he's being tarred with hot pitch before Bullock makes his second rescue of the day. "Disperse this riotous assembly," he says, and the mob complies.

Alma Garret relents, allows herself to be examined by Doc Cochran and learns that most likely she can have a child, although with more difficulty than most women. "It adds pain. 'Difficult' in that sense." Garret is nonplussed. "I've been told it wasn't an alternative for me even to contemplate, so this is new information," she responds.

The Doc examines Al's eye and observes "a reabsorption of the hemorrhage," to which Al responds: "What the fuck is less blood in my eye? I want use of my fucking limbs." Bullock arrives and reports that the commissioner is safe. "Thanks for that," Al says. "Let me get on my feet and I'll hold my end up and more so... They're coming against us, have no illusions on that score either."

Swearengen senses that there's another force at play in what's going on in Deadwood. "I'll guarantee you too, politicians ain't got balls for this type unsupported move," he says. "Someone's backing their play or they'd be here bending over for us." When Bullock asks if that might be Tolliver, Al points out, "Tolliver is us. They're not going to back Tolliver over me this early in the game. There's a nigger in the fucking woodpile, someone from outside the camp." 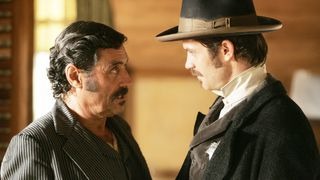 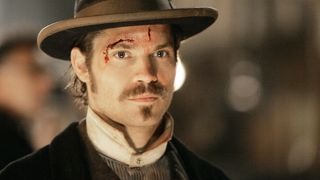 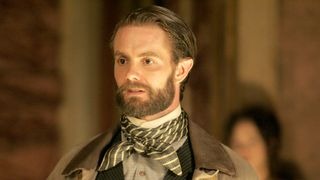 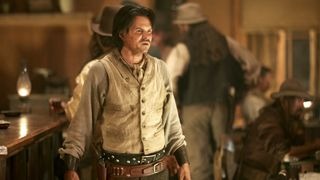 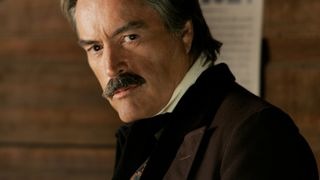 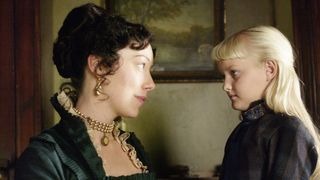 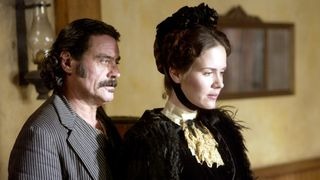 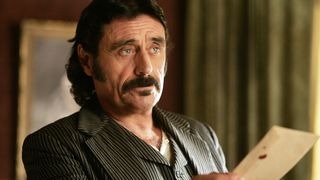 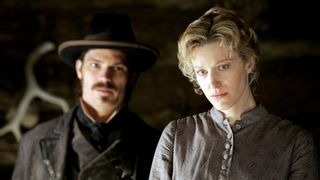 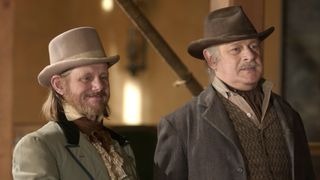