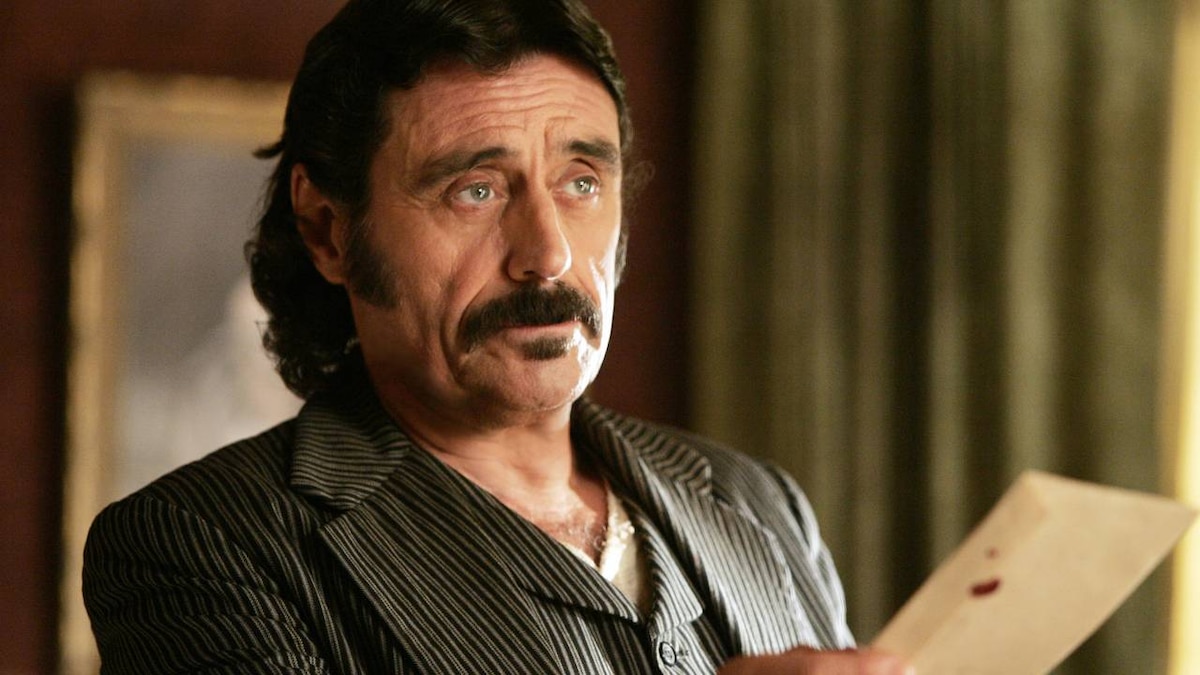 Over coffee, Bullock and his stepson William share a moment of conversation, and Seth asks the boy about his father. Martha watches the pair from the stairs, moved by William's remembrances and by Seth's interest.

When the talk is interrupted by Charlie Utter, however, the communication between Martha and her husband is still very strained.

Farnum reports to Al, who is still irked that E.B.'s toothache detained him from his duty of reporting on the telegraph man's arrival. He tells Farnum to befriend the operator Blasanov and monitor any wires coming in from Yankton.

At the Bella Union, Tolliver is agitated. The extremely belligerent-and now wealthy-Mose Manuel has ensconced himself in his establishment, but is not spending at an acceptable rate. To make matters worse, A.W. Merrick has filled the Pioneer with rumors of potential suitors for Deadwood, confusing Tolliver's own interests.

Ellsworth and Alma discuss the impending arrival of a safe filled with currency, which will be secured at Bullock & Star until the new bank is ready, but business has become awkward between them as she ponders his marriage proposal. Before rushing out in another bout of nausea, she gives him a letter to be delivered to Swearengen.

Hostetler and The General have come into possession of a valuable wild horse, and they intend to "nut him" in order to sell him to the Calvary. Hostetler warns that the moon isn't right for it, but the men stand to make $100 on the horse, which makes a delay unpalatable.

Al is irritated at Merrick's coverage of the annexation issue, which includes rumors of interest from Montana, Wyoming and Washington, D.C. "Don't spread your legs for 'em yet, Johnny," he tells Burns. "Not with Mexico yet to be heard from, and France." In his office, he berates Merrick for his clumsy handling of the story. He warns the newspaperman that the use of misinformation as a tool must be handled carefully, because the people coming after them are rough types, "after our nuts."

Farnum reports to Swearengen that Miss Isringhausen has sent a telegram, and that she appears to be waiting for a reply.

William, planting seeds brought from his old home, tells his mother that Bullock is missing his brother, and suggests bringing him lunch.

Bullock and Utter's interrogation of loud-mouthed Manuel goes poorly, with Mose denying any firsthand knowledge. Bullock is suspicious of a man "gut shot by his own hand" on the same day the two sold their claim. Tolliver adds his own stream of insults to the interview, and when Wolcott interrupts to report the death of a thief on one of Mr. Hearst's claims, Utter becomes enraged.

He has to be held back from attacking Wolcott, and then mixes it up with Tolliver. Pulled out by Bullock, he yells out to Manuel. "Sure got to you, didn't he Mose? Now he's got to get you to die."

Still sputtering outside, Utter tells Bullock about getting Hickok's letter back from Wolcott, but refuses to explain the beating he administered to the geologist. Explaining that he is leaving town, he tells Bullock not to worry about Mose Manuel, but reveals his own concerns about Jane. Seth promises to look in on her.

Armed and passed-out on Joanie's front step, Jane tells her new friend that she's "keeping half-assed vigil after the fact." Though Jane is skittish and awkward, she eventually comes inside. Later, Joanie asks her to move in for a while as a favor.

Martha and William arrive at the hardware store with lunch as Bullock, Star and Ellsworth endeavor to install the safe. She suggests that Alma should be in attendance, an idea that galls Trixie. Running after Ellsworth, who is on his way to fetch the widow, Trixie demands to know the status of his proposal.

Al meets with Miss Isringhausen, telling her that he has received a letter from Alma Garret, who has realized that she has betrayed their plan by letting it slip that she knows Isringhausen works for the Pinkertons. Al surmises that Miss Isringhausen's wire reported this to her bosses. Miss Isringhausen acknowledges this to be true, but adds that she assumed the bidding on his loyalty was still open. "The bidding's open always, on everyone," he replies, but goes on to explain that having the widow Garret's in-laws selling out her claim works against his interests. Under the circumstances, Al suggests that Miss Isringhausen's loyalties might be more affordable than his own.

The former tutor accepts Swearengen's offer of $5,000 (and her life), under the condition that Bullock witness the signature of the confession document and that he escort her out of town.

But Bullock is not available at that moment. A safe full of money and a room full of strained emotions is more than enough to keep him occupied. Alma and Martha both make an effort to improve relations, however, and soon Trixie is making the first deposit in the new bank.

Mose Manuel is meanwhile bringing the timbre of the Bella Union to a new low, receiving sexual favors while simultaneously gambling and loudly complaining. In a fit of abuse, he claims he is being cheated and demands all of his money back. With an armed guard over his shoulder on the balcony, Tolliver moves to placate Manuel, but Wolcott steps in and baits the man further, invoking his dead brother. Mose raises his gun and is immediately shot. Brushing aside Tolliver's objections, Wolcott orders someone to get the sheriff.

At the livery, Hostetler and the General are having trouble containing their wild horse, and when it comes time to nut him, the horse breaks for the street. The wild animal narrowly misses Tom Nuttall aboard his bone shaker, but smashes into Steve, who is talking to William Bullock. As the sound of alarm fills Deadwood, Steve pulls himself up on a broken leg, and William, unconscious, lays splayed out on the street.