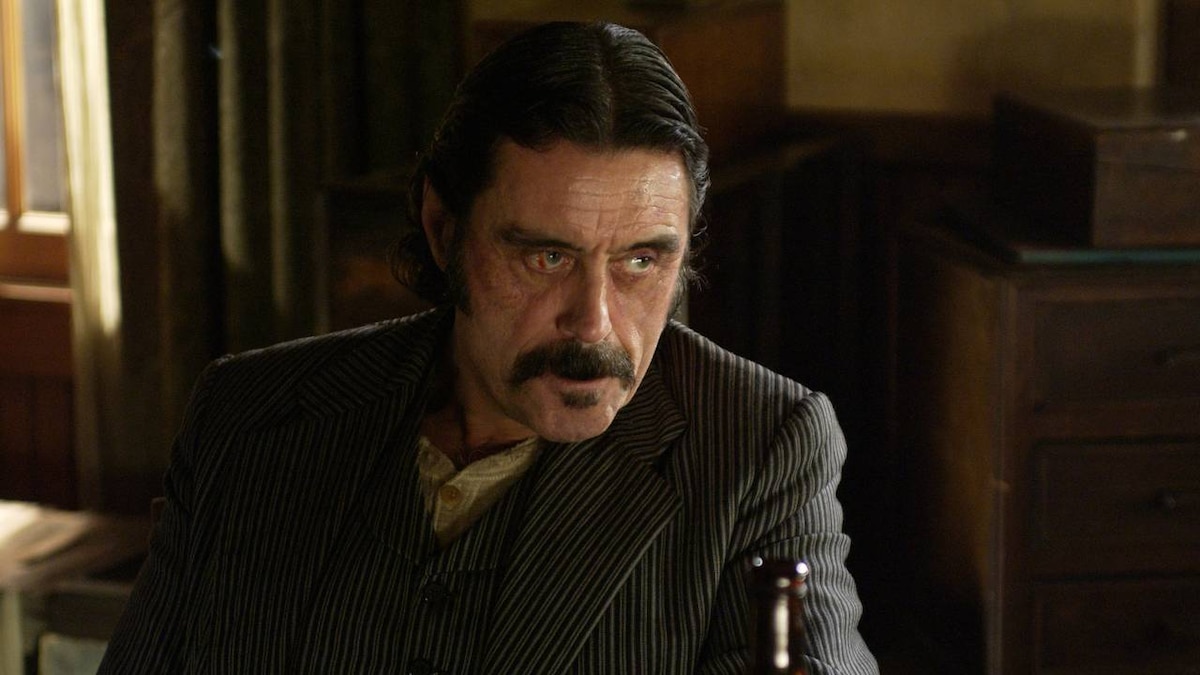 Doc Cochran gives Swearengen the once-over and is amazed his miraculous recovery. "You, Al, are an object lesson in the healing powers of obstinacy and hostile disposition," he says. Al complains the his arm and leg still feel waxy, but Cochran declares him ready to meet the world, and he is soon propped up and receiving a long line of supplicants.

Down on the street Cy Tolliver asks Wolcott how long he should keep buying claims. "This phase is almost over," Wolcott says, watching the arrival of a cart driven by Lee and his men. "Even as another begins."

As the cart stops, Wu approaches and angrily slices open the canvas covering its sides, revealing a cage filled with Chinese women. "Tell me those are my new employees," Tolliver says.

Alma and Sol meet, and the widow proposes the founding of a bank in town, to be run by Star. But Sol refuses, saying he has other obligations. "We all have complicating obligations," Alma says, turning pale as she rises and vomits in a basin.

County commissioner Jarry has been badly shaken by his run-in with the mob and accuses Tolliver of being a Pontius Pilate. But Cy claims that he was merely manipulating the crowd on their behalf and that the morning has brought a raft of new claim sales for even lower prices.

A terrified Jarry flees town, leaving Wolcott to wonder aloud what report he will make to Yankton. "That your money spends and that I am a dangerous man with whom to disagree," Tolliver answers.

Back at The Gem, Trixie is first to give a report of the town's activities during Al's convalescence. Swearengen asks how things are going with "the Jew" and Trixie describes Alma Garret's bank offer. Al warns her against giving herself away for free, and Trixie explains that she is trading for accounting lessons.

Next up is Farnum, who describes to Al how he set himself up to be a shill for Wolcott and Tolliver. "How much did he pay you?" a skeptical Swearengen asks. Farnum swears his loyalty. "You looked out for yourself against the chance I would die," Al says matter-of-factly. "I never wished for that outcome," Farnum replies. "But I am a born follower."

Downstairs, Trixie locates Ellsworth. She is exasperated at his density, but makes the bewildered man understand that his boss, the widow Garret, is pregnant. Knowing that Alma might want to keep the baby, Trixie suggests to Ellsworth that he should consider "doing the right fucking thing." Ellsworth seems stunned by the concept, but appears to consider it.

When the stage arrives, an ecstatic Merrick fawns over Deadwood's new school teacher, offering to take her on a tour of the camp.

Sol arrives at the hardware store after his meeting, but Bullock has already opened. Bullock gets his partner to admit that he has met with Alma and the two argue. Bullock gets ugly and brings "the whore" into the discussion and Star warns him that he is over the line. Fuming, Bullock storms out.

Al continues his audiences, now hearing from Miss Isringhausen, who has been escorted by Silas Adams. The woman tells Swearengen that while in Alma Garret's employ, the widow, under the influence of opium, admitted to having her husband killed, and named Al as her instrument. Swearengen, seeing through this artifice, asks Isringhausen who she works for, adding that he hopes it's not the Pinkertons, sent by Brom Garret's family to swindle the widow out of her gold.

Miss Isringhausen declines to name her employer, insisting instead that Al focus on the money: $50,000 for his cooperation. Looking hard at Adams, Al asks if there is "no charge for the pussy" and asks for a day to consider the offer.

Afterward, Silas is furious for being made to look like a fool. "Come on up and fuck me, why don't you," the former tutor says, promising to answer any of his questions afterward.

Still riled, Bullock takes his anger out on the rabblerousing former claimholder Steve. "There'll be no murdering of people in this camp of any color and no assaults of officials," he says. "If you can't live with it, get out of this fucking camp." To punctuate his point, he slaps Steve to the ground.

Tolliver and Wolcott are concluding some claim business when Cy complains about the quality of the new Chinese whores who are kept in unsavory cribs in the alley. In addition, there is something about Wolcott's anger, Tolliver says, that he is concerned about. "I hear accounts, Mr. Wolcott that you are a dangerous lay," he says. "And that adds to my concerns."

Tolliver pointedly warns that such information might not be appreciated by Wolcott's boss, George Hearst. "It's a dangerous habit to indulge when you are not among friends," he says. But with barely controlled rage, Wolcott explains that Hearst is aware of his inclination, and finds it immaterial. Anger rising, he tersely insults and threatens Tolliver and suggests he find a way to make himself useful. Cy insults him in return, and Wolcott leaves.

In bed, Miss Isringhausen describes how she was hired to answer Alma's ad for a tutor, but claims she was not told details about her employer. Silas suggests that Garret's family would seem a likely client of the Pinkertons, and Miss Isringhausen agrees.

Charging briskly across town, Wolcott is rambling in fury over the betrayal of his secret. "No, Doris," he mutters. "We must not let you become past surprise." Entering the Chez Amis, he is told by Maddie that Carrie is napping, but he tells her he would like to see Doris. Maddie tenses, and Doris enters the room with him.

Soon Joanie is back, and, knowing that Doris has been reporting to Tolliver, she is terrified at what could be going on in the room. Finally Wolcott emerges. "I would like to see Carrie now," he says. The girl is summoned, and is soon looking at Doris's murdered body. With a tear running down her cheek, she tells Wolcott that the problem can be dealt with. But Wolcott says he has another problem. Carrie has "seen him." Carrie realizes what has come. "You're fucking crazy. And I am going to die in this shithole." She asks if he can make it so it won't hurt, and in a flash, Wolcott has slit her throat with a razor.

Outside Joanie can wait no longer. But when she goes to her drawer, her gun is not there, it is in Maddie's hand, pointed at her. "Go on, get out," Maddie tells her, crying.

When Wolcott comes out this time, Maddie is waiting for him. "What have you done, Mr. W," she asks shakily. "Something very expensive," he answers in a daze.

Maddie points the gun at Wolcott's face, telling him he will pay her $100,000 and more, almost babbling as she pushes the gun toward him. He reaches for her and in one move flicks his blade across her throat, and Maddie falls to the floor, blood pooling from her.

Back at the Gem, Wu has his turn with Al explaining about the emergence of the "San Francisco cocksucker" Lee. Tolliver, meanwhile, engages Col Stapleton and Leon to break into the Pioneer, in retribution for Merrick's lack of cooperation with Jarry.

Joanie rushes to the Bella Union to enlist Cy's help. At first disinterested, he jumps up when he hears about Doris. "Don't fucking follow me," he says running out. At the Chez Amis, he finds Wolcott, and after collecting himself at the ghoulish scene, smiles his alligator's smile and tells the man to go back to the hotel.

At the Gem, Al's final meeting is with Lee. With Wu looking on from a closet, he has Dority stack bags of gold in front of him, but Lee is unmoved. After he has left, Swearengen shakes his head. If twenty won't sway him, he must be working for Hearst.

Bullock apologizes to Star and asks about the details of Sol's meeting with Alma. "She never mentioned your name," Star says, but adds the bombshell. "I got the impression she was with child."

At the livery, Hostetler wakes up to observe a strange scene. An impossibly drunk Steve is having sexual congress with Bullock's horse. Hostetler ties him up, and later tells Samuel Fields that he is going to kill him. "He needs to be dead," Hostetler says. But Fields convinces him to let him go, after securing from Steve a blessing and a written confession: "I fucked Bullock's horse."

Receiving another good report from Doc Cochran, Al tells Dority and Burns that they need to muscle up with out of town recruits. Shuffling over to his balcony, Swearengen looks out over the street at night, as Joanie secretly hustles her girls out of town in the back of Utter's wagon.