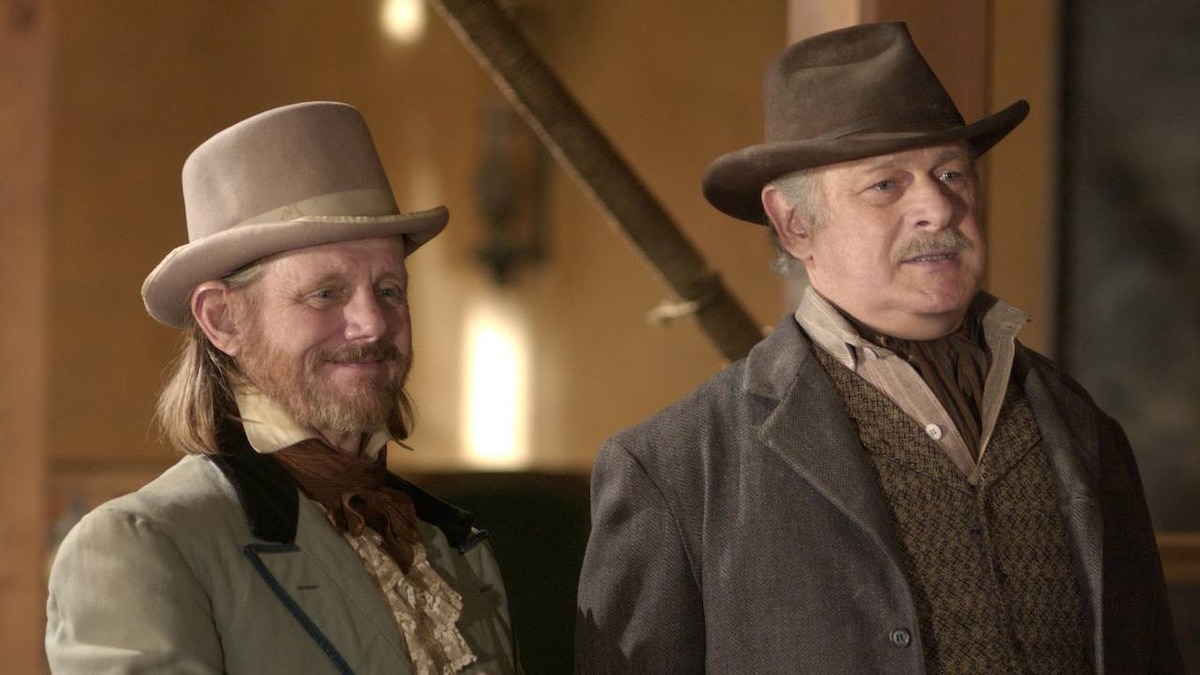 Boy the Earth Talks To

With his guard Davey asleep, Wu sneaks out from his room at the Gem and quietly signals to two of his men. A plan is quickly hatched, and soon Lee's giant henchman has received a hatchet in the back. Lee pulls his pistol and levels it at one of the assassins, kills him and keeps walking down the alley with the weapon drawn. Wu confronts him with a cleaver, cursing him emphatically. But the confrontation is interrupted by Johnny Burns, who sizes up the situation and pulls his own gun, dragging Wu from the scene.

Al, who has seen George Hearst arrive by coach, is furious when he learns of the Wu fiasco. Trying to salvage his plan, he tells Farnum that he wants to meet with Hearst and tells the hotelier to inform Hearst that he has the man who killed his man.

Solemn in their house, Martha and Bullock discuss their plans, and Martha suggests that she'd still like to take up teaching the town's children and Seth agrees that it would be a good idea. Sitting stiffly, he eventually reaches for his wife's hand.

Nervous about his impending nuptials, Ellsworth makes one of his numerous trips to Sol's store for support.

Hearst pays a visit to Swearengen and the tone is cordial. Al obsequiously offers Wu up to him, but Hearst explains that his single preoccupation is the pursuit of "the color." He is happy to deal with the town's predecessors if it enables him to focus on his mining operation. In that case, Al suggests, Wu would be the perfect man for supplying Chinese laborers for the mines. Hearst is open to the idea, but tells Swearengen that he would need a demonstration that Wu would "prove out" over Mr. Lee.

Hearst makes another offer for the Grand Central, and Farnum snaps, cursing him. Farnum apologizes, claiming madness, and indeed, E.B. seems to be slipping back and forth from rationality. Hearst offers him $100,000 and a job as manager, and Farnum readily agrees.

The town prepares for Alma's wedding: Trixie dresses to the nines and even Jane is coerced into new clothes.

After sleeping by the telegraph, Jarry brings Al Yankton's counteroffer, and Al summons the former lawyer Silas Adams to peruse it. "We study for our f**king lives," he says.

Tolliver sidles up to Hearst and not-so-delicately lets the man know that his geologist Wolcott killed three women-- and that Cy was central in the cover-up.

Alma pays a rare visit to the grave of her husband, ruminating on her situation. "I am afraid that my life is living me," she says to Brom. "Soon it will be over and not a moment of it will have been my own."

Hearst angrily confronts Wolcott about Tolliver's story, and Wolcott admits that it is true. "It happened in Mexico, and it's happened here," he says. Hearst tells him that they must end their connection.

Al and Silas work over the Yankton agreement, fine-tuning election issues and removing the clause offering a $50,000 bribe. "If we get this thing off the ground, I will be without peer robbin' these f**kers blind," Al says. "But I don't want the founding document recording a f**king bribe."

As the wedding party gathers at the Grand Central, Al spots the fine couple, Sol and Trixie, and tosses his employee Miss Isringhausen's letter as a wedding gift to Alma. With Joanie, Jane, Merrick, Sofia and others in attendance, and with Sol on hand to give away the bride, a somewhat shaky Alma and Ellsworth are married.

As a reception takes place in thoroughfare, Dority, Adams and Burns dress in the clothes of Chinese laborers under Wu's direction. Wearing masks, they follow him into the alley and begin dropping men with knives and hatchets. Finally, they reach the room of Lee, who is being serviced by a prostitute. Wu slits his throat with relish.

George Hearst attempts to pay off Tolliver with two large bags of gold, but Cy tells him he wants five percent of every claim he helped arrange. If Hearst refuses, Tolliver will make public a confession letter from Wolcott. After Tolliver leaves, Hearst orders his enforcer, Captain Harris, to find out if the letter exists.

At the Gem, the deal with Yankton is consummated, with Bullock on hand as a witness, and as Deadwood celebrates the wedding with singing and dance, Merrick barks news of the new elections. Tolliver ridicules Andy Cramed for bringing the "plague" of religion into town and finds himself stabbed in the gut. "God is not mocked, you son of a bitch," Cramed says, walking away. Cy is terrified: "He gutted me!" he says. "Don't let me die."

Al watches the celebration from his balcony, with The Chief and a bottle for company. When the triumphant Wu arrives, he promises allegiance to "Swengin." Cutting off his ponytail, he declares "Wu America!"

In the middle of the celebration, Captain Harris makes a discovery. Wolcott has hanged himself from the balcony of the livery.

At the Gem, Bullock is at the bar, and Swearengen baits him. "Don't you have a f**king home to go to?" he asks. But Bullock, walking out, catches sight of Alma, and he and the bride share a long look until Al interrupts. "I believe it's to your f**king right."