Pete returns to barking and runs into the Lucas brothers at a pizza shop. He tells them they can go up at The Boston, but they explain they're "alt" guys — alternative comics, meaning they don't do clubs. Pete considers exploring this new avenue and tells Jason he won't be at the club the next day. Jason tells Pete the alt scene is "comedy terrorism."

At an alt show in Brooklyn, Pete runs into Ali who is still trying to make her tape. He apologizes for his behavior at her apartment, and she invites him to her next show. As they wait for the train, Ali tells Pete he has a "dorky dad at a barbecue" essence. Discussing why they got into comedy, Pete admits he's never done more than one show a night.

Ali and Pete go to The Apartment—another alt venue—and Ali helps him get stage time. Pete goes up and the audience loves him. Ali tells Pete she didn't get her tape because she flubbed a bit but she did tape his. They get to know each other by the water and Pete talks about the end of his marriage.

At the next venue, Rififi, Ali gets bumped by John Mulaney. Pete tries to impress Ali by asking Mulaney to go after her so she can make it to her next spot on time. Mortified at Pete's attempt at chivalry, Ali tells him off. Despite the awkwardness, Ali kills her set. She watches the tape on the train home, but Pete's laugh (and his exclamation of "too good!") ruins her tape. Ali tells Pete she doesn't need his help and tells him to leave her alone. The train is held underground, giving Pete the opportunity to make things up to Ali: He helps her walk through the train cars so she can make it to her next show on time.

Pete and Ali arrive at Upright Citizens Brigade right on time and Pete tapes her set. After the drama of the night, they return to Ali's apartment and have sex. 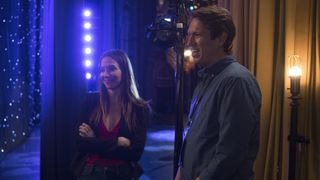