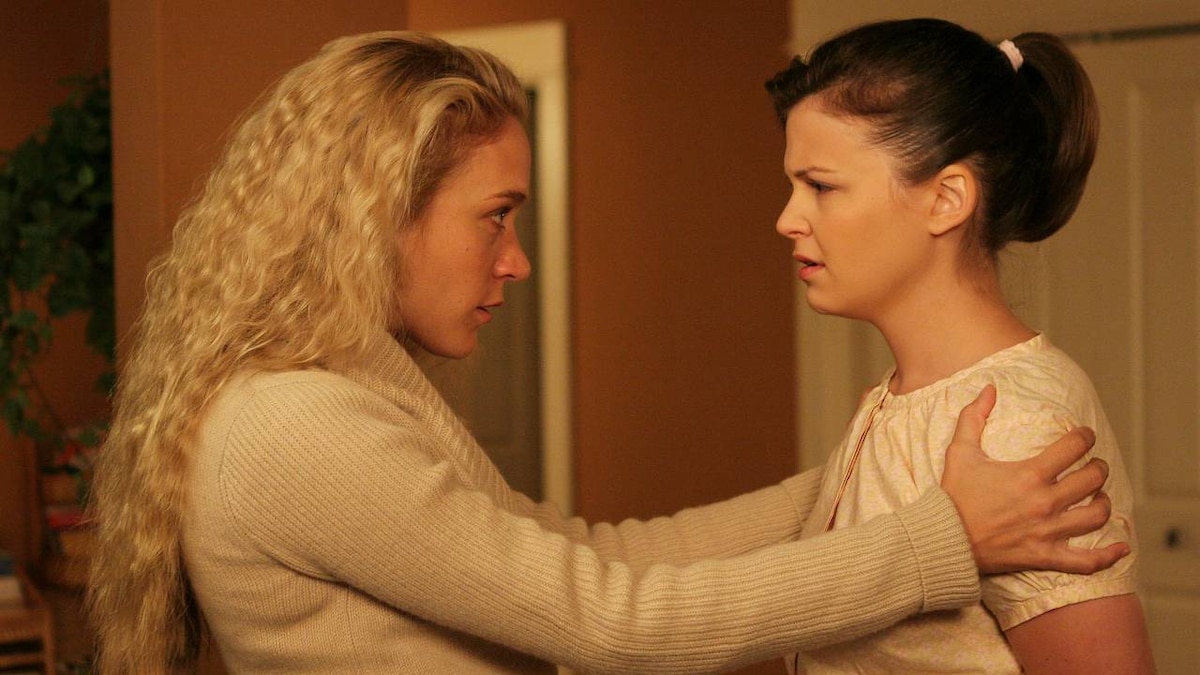 A Barbecue for Betty

With both their lawyers present, Roman and Bill sign off on their new agreement, and Bill returns the prized guitar. Excited about breaking ground on the third store (now his "free and clear" of Roman), Bill decides to throw a lavish lobster bash celebrating his freedom, along with the Embry's engagement — they've voted unanimously to take on a fourth wife.

On Nicki's night, Bill is back on his game in the bedroom (he likes it when she's "in control"), so she decides their post-coital afterglow is a good time to come clean about her debt. Bill's euphoria quickly gives way to rage, and he drives off into the night, Nicki following him down the street in her nightgown. Barb plays dumb when Bill breaks the news the next day, but when she quickly suggests a solution to the debt problem, he suspects she'd been keeping Nicki's secret all along, enraging him even more. "I was in a difficult position," Barb explains. "I'm married to two other people. You seem to forget that sometimes."

When Margene learns that the Embrys all voted before taking in a new wife, she becomes preoccupied with her own electoral process. Ben lets on that the decision to take her on was 2 to 1 at first. "It was just so everyone could get to know you better," he tries to assuage her. Determined to find out who voted against her, Margene interrogates Nicki, who, already on shaky ground, insists it wasn't her. "I love you Margie. Do you honestly think I could have voted against you?"

Despite Nicki's attempts to smooth things over, Bill refuses to see her, stoking her fears that he might just throw her out. She's seen it first hand at the compound, wives left at the side of the road "like a sack full of unwanted kittens," she tells Barb. Her own father left one of his wives at a Conoco station in Nevada. "You need to have more faith in Bill," Barb tells her. If he were ever to do such a thing, she would leave him. Nevertheless, Barb tries to intervene on Nicki's behalf. Lots of people have debt problems, she tells Bill. "A lot of people are dope fiends," he fires back, "but I'm not married to them!"

Nicki's not the only one who's been keeping secrets from him. Sarah's friend Heather has been over at the house again, and when her father arrives to pick her up, he's wearing his State Trooper's uniform. Sarah never mentioned what Heather's father did for a living. She also neglected to tell Bill about the father-daughter pancake breakfast where the two dads were supposed to meet.

The neighbors neglect to tell Margene that their invitation to dinner is actually a fix up. They've invited their friend Chad from church, despite Margie's protests that she's not available — "emotionally," that is. But Chad is quickly charmed by her, and Margene is eager to make a good first impression, especially since learning she's had to win people over in the past.

The weight of a sudden downpour collapses a part of Home Plus's roof — just as Roman and his wives arrive to do some shopping. Stressed and angry, Bill prepares to throw them out. "You and I are finished," he tells his father in-law. "It's too bad you feel so uncomfortable around your family," Roman replies, before handing over some of the papers Alby "borrowed," cryptically commending Bill on his work preserving historic sites.

Chad surprises Margene by showing up at her house in the downpour, bouquet of roses in hand, leaving her little choice but to let him in — despite her house full of kids. "I couldn't sleep at all last night," Chad confesses. "I felt a burning in my bosom... I believe I might've had a revelation: You're the one for me." With Nicki's son watching, Chad tries for a kiss. Margene stops him. "I have my eye on someone else," she tells him, quickly showing him the door. Crestfallen, Chad suggests she may be looking in the wrong direction.

When the day of the lobster bash arrives, Nicki decides to come clean about another secret — her father helped pay some of her credit card debt. Bill explodes, sending Nicki running. Don stops by with bad news of his own — his family won't be attending the party. Betty, the fourth wife-to-be, was blackballed. While helping her move, one of the wives discovered Betty had been a Moony, and prior to that a member of a cult, and possibly a few other groups. Fearing she was a lost soul who'd be unable to commit, the wives demanded a re-vote. After hearing that Betty is out waiting in Don's car, Margene pays her a visit and urges her to stick it out — to prove the wives wrong. "Sometimes you have to let one train leave the station for a new one to come in," Betty tells her, resigned. Besides, she thinks its best to let go of negative thoughts.

Sarah is also bothered by Betty's ouster, bothered that she couldn't tell people who she really was. She confesses to her dad that she didn't tell him about the pancake breakfast because it hurts her to see him lie about his life — to tell people that he has one wife, one family. "I hate that about this life... all of us having to hide."

Reeling from the turmoil at home, Bill arrives at work the next day to find Don asleep in his car. His wives ganged up on him, upset that he didn't research Betty more before bringing her into their lives. They'd grown attached to her. Bill suggests that Betty was simply not part of God's plan for him.

But the flash flood that damaged their roof was, apparently, part of God's plan; an insurance inspector confirms that they're covered, since a flash flood is considered "an act of God." So Don is inclined to see their next misfortune as part of the bigger picture as well: the land for the third store is now off limits; someone just filed an injunction claiming a tribe had a winter camp there once, and now their plans are up in smoke. "This isn't bad luck," Bill says, whacking a pile of folders off his desk. "This is Roman... What do I have to do to get that man out of my life?!"

He's interrupted by an alarming call from Barb: Nicki didn't come home last night, and she just called to say goodbye. Bill sets out in search of her, and when he finds her, she's in the mall, filling out an application in a fast food restaurant. The "shelter" kicked her out at 7am, she tells him; she'd been at the mall ever since. She couldn't go back to the compound carrying the shame of a discarded woman.

Having been discarded himself once, Bill is finally ready to forgive her. "You made me feel that I had failed, that I wasn't in control," he tells her. "But I'm not in control of you, and I love you anyways. We made a covenant with each other. We can disagree, we can argue. We're human. And beneath that there's something strong — family. Nothing breaks that bond. This isn't the compound and I'm not my father — we don't kick out family members."

With this, Nicki drops a bombshell. "Your father didn't kick you off the compound..." she tells him. "Mine did." Bill can hardly believe her at first. "He was afraid of you," she continues. "Your grandfather was the Prophet. My Dad thought you were too much like him. Whatever comes your way you can handle — you don't give up. My father calls it pride."

Back at home, Nicki is greeted by Margene, who's grateful to see her. She was scared, but she still needs to know about the vote. Exasperated, Nicki finally admits she was the holdout. "I thought you needed a lot of reassurance... I was worried it would always be the Margene show," Nicki says as Margie fights off tears. "This is a hard life. I just thought you might not be ready for it." Hurt but determined to prove she can handle it, Margene thanks her, finally ready to let go. When she's gone, Nicki pulls a piece of a paper from her purse — a receipt from a hotel.

Unable to find an unlocked dumpster for the bags of rotting dead lobsters, Bill decides to take them to the only place left he can think of — the site of his third store, now one big 'historic' dump.