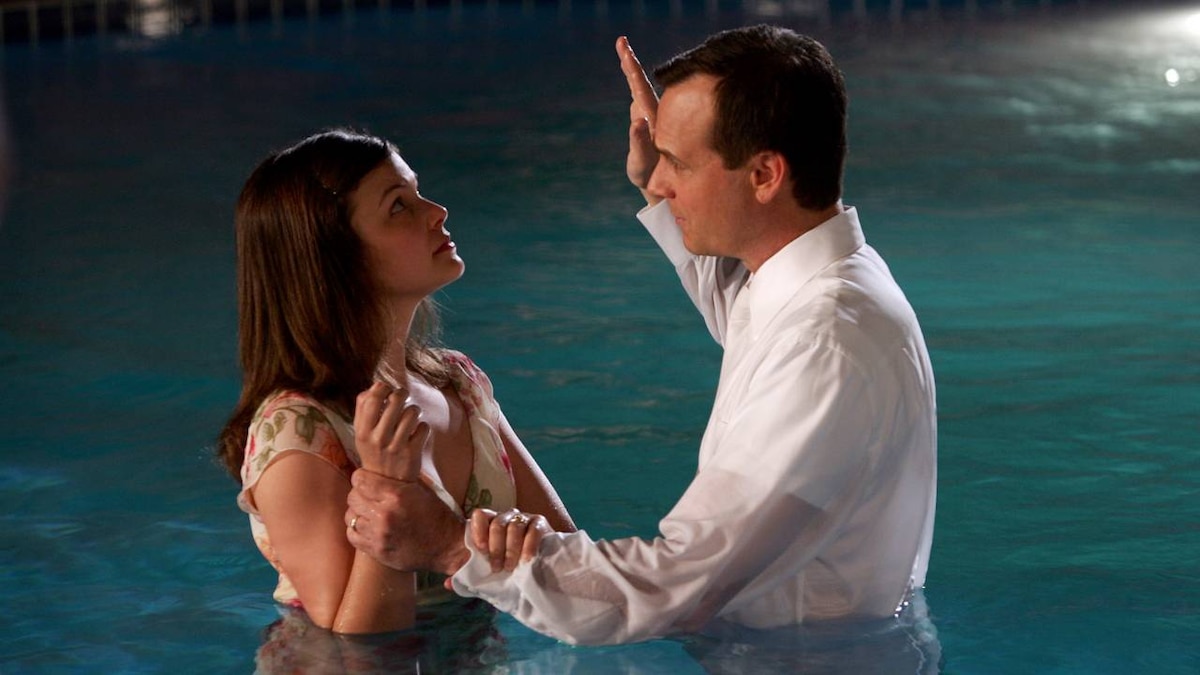 Lois just returned from Mexico — she visited the place where her family hid out when her father was facing arrest — and now she needs Bill to drive her to the compound in time to help Wanda deliver her baby. On the way, Bill tries to enlist his mother's help in his latest mission: he's hoping to find a member of the Priesthood Council who will turn mole on Roman. Lois tells him he's playing with fire. Besides, with Roman bringing them all their young wives, it's unlikely anyone's allegiances are up for grabs.

Barb's sister Cindy is in town for business, and she needs to talk to her: their mother prays every night that she'll have Barb back in her life again. Barb has been hoping for a reconciliation too. She hasn't had her family in her life since she left the hospital seven years ago. "You didn't just leave that hospital," Cindy replies, "You followed Bill into polygamy. You couldn't have shocked us more if you put a towel on your head and converted to Islam." Dismissing her remark, Barb asks if their mother would be ready for her to come by with the kids. "How about we start with just the kids," Cindy demurs.

Ben gives his girlfriend Brynn a present he made in wood shop, but when she tries to give him one in return, he rejects her advances. "Do you know what it feels like to have a guy say no to that?" she asks, before breaking things off. She thinks he should find someone who wants to stay a virgin, like he does.

Since learning about the reluctant vote to include her in the family, Margie's been resentful of Nicki and Barb's attempts to make her feel more included — the latest involving preparations for Teenie's baptism. "They think Mommy's a moron," she tells her son, as she unwittingly drops a red crayon into the laundry with Bill's baptism whites. When the clothes come out smeared, she runs to the neighbor for help. Pam recommends a special goop remover, then fills her in on a little secret: the missionaries she sent to her next door neighbor's ("the braid") discovered that she's a polygamist. "They're like cockroaches" Pam says. "They try to hide, they're secretive, probably cause of the shame of it all." To get an extra set of eyes on her, Pam's mentioned Nicki to the Neighborhood Crime Watch. "They can be ruthless — kidnapping and all kinds of unspeakable things when they fight with each other." Margie nods distractedly and agrees with her. "Crime Watch on the Braid."

As Lois helps Wanda deliver her baby, Bill sends Joey to the library to dig up family trees, determined to find someone who's not related to Roman in some way. They hone in on a possible candidate: Ernest Holloway, former head of the P.E. program at the Academy — before it was shut down. According to Lois, Holloway is a little "off in the noggin," but he hasn't had one new wife in ten years, which means he's either had his fill or he's been cut off.

When Nicki learns that Barb has been meeting with her sister, she doesn't hold back. "Don't let your sister near those kids. She's judgmental and she only makes you feel bad about yourself! I can't stand her, either." Barb tries to explain that a visit between her mother and her kids would be the first step in a healing process.

Pam's goop solution was meant for walls, not washing machines, and the flammable liquid burns holes through Bill's whites and nearly ruins the machine. When Nicki discovers the foul up, she flies into a rage. Margie flees to the bathroom with her toddler, lights up a cigarette, and talks about running away — someplace where there are no neighborhood watches.

Cindy arrives early to pick up Ben, Sarah and Teenie, and without Barb home to intervene, Nicki insists on offering her a tour of the new houses. "It must be so hard to leave your kids when you travel," Nicki remarks, showing her their joined backyards. "I can't imagine not raising my own kids." As Cindy clenches her jaw, Nicki talks of how their houses have no fences, "kind of a metaphor for sisterhood... acceptance, love... but you know what I mean... you're her real sister, right?"

In the wake of Pam's condemnation of polygamy, Margie starts to question her own identity. "Did I choose this, or did it just happen to me?" she asks Sarah, who lets her in on another Nicki secret: she bet Bill that Margie wouldn't last six months.

At the compound, Bill and Joey pay a visit to Ernest Holloway's house, where Bill offers the old man a large envelope of cash to get his P.E. program back up and running. Grateful for the interest at first (it killed him when the Council voted P.E. out of the Academy), Holloway asks Bill what he wants in return. As the man's wife picks up a phone call, Bill explains he needs to know about Roman's business dealings, particularly the ones that have to do with him. Joey watches as the wife leaves the phone receiver on a shelf, and tries to silence Bill, but he continues — explaining he'd like to keep the arrangement between them. Holloway returns the envelope and changes his tone. "The man you hope to harm is the one true Prophet of our most holy Church," he says fiercely. "May our heavenly Father forgive you this trespass." By the time they arrive at Joey's house, Alby is waiting out front. "No more playing dirty, all right Bill?"

Teenie has been hiding something, and to get her to come clean, Margene offers to share a secret of her own. She takes Teenie to her garage and pulls out her hidden pack of cigarettes. As Margie lights one up, Teenie explains what she's done wrong: she wrote about why her mother should be Utah Mother of the Year for a class project, and Barb was chosen. "You're our moms too, and I don't want to hurt your feelings." As Margie tries to assure her she didn't do anything wrong, Nicki bursts in on them, a garage full of smoke. "What kind of example are you setting? You're grounded!" she yells at Margene. When she finally calms down, she tries to explain her eruptions. "I'm no cream puff like Barb. I don't like a lot of people. But I liked you. And eventually I wanted you in this family because I grew to love you."

Upset about losing Brynn, Ben drives to her house to apologize. But Brynn isn't interested in any more talk. The two quickly undress, and in an awkward, mechanical moment, Ben loses his virginity.

As Bill and the wives prepare for Teenie's baptism, Cindy stops by to return Teenie's Gameboy — then chastises Barb for baptizing her daughter in the swimming pool. "The children are innocent — you shouldn't involve them in this. What kind of example are you setting?" Nicki takes it upon herself to intervene. "Our children are strong minded, independent works of art — much like their mothers. Our children are at least three times as cared for and Barb is ten times the mother. Where are your children when you skip off every week on business?"

"God forbid something should happen to my sister," Cindy responds, "those children are my responsibility, not yours. And I will do everything in my power to ensure that they grow up to be good, strong, moral young people." Nicki fires back: "God forbid — now get out."

In the wake of the confrontation, Barb tells Bill she wants to change the will. If anything were to happen to the two of them, she doesn't want the kids to go live with her sister anymore. "I want them here — with their family."

Margene pays a visit to Pam and explains she doesn't think they can be friends anymore. She can't really be herself around her, and she's only beginning to understand who she really is. As a confused Pam tries to reassure her, Margene adds that Nicki is a good person. "She's not a cockroach. And I'd never do anything to hurt her. I'm sorry if I lead you to believe that I would." She hugs her and leaves, squinting back tears.

While preparing for Teenie's backyard baptism, Bill gets another surprise visitor — the Holloways. Ernest asks Bill if he can offer some protection, and after receiving assurances, tells him he's prepared to do what he asked. His grandfather Orville's death weighed heavy on his mind, he explains. "Orville and Roman were not alone on their final trip. Our Heavenly Father was in that truck when your grandfather died, and he saw how Roman wrestled his way to where he is now. Mighty his wrath will be come judgment day." Taken aback, Bill explains that, outside the compound, allegations such as these need substantiation. "I'm a man of faith, Bill," Ernest responds, "willing to risk blood atonement for the truth. Your heart knows if you should trust me." He pulls a journal from his car and shows it to Bill, open to a page with a photo of him sitting on his grandfather's lap. "He saw something very special in you. He was not at all shy about that."

With the family all present, Bill baptizes Teenie in the pool, welcoming her "as an adult member of our family for all eternity, with all the responsibility and privileges of family and faith." Overcome, Margene jumps in the pool and asks that she be baptized next. "When I married into this family," she tells Bill, "I guess I must've thought I was just marrying you. Now I realize I was marrying all of you," she says, turning to the others. "I was marrying sisters, my sisters, that was my choice, and I'd make that choice all over again." She knows she keeps making mistakes, but she will get better, she assures them, because she loves them and she needs them. "I never ever not want to be with this family — here or in heaven." She is ready to be submerged.

After the ceremonies, Ben excuses himself to his room and says a prayer. "Dear Heavenly Father, I have knowingly sinned against you. Please, I will follow your path wherever you want me to go, if you will tell me a prayer or a way to have back my virtue, my virginity. Please, Dear Lord, I need you with me now."