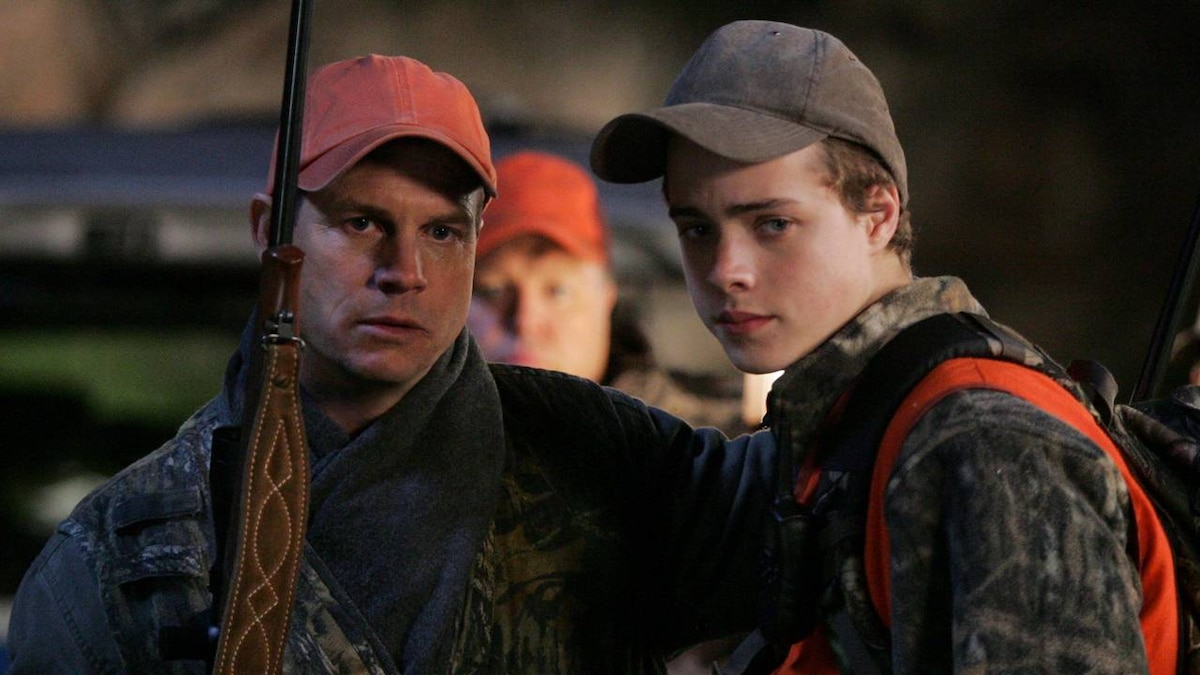 Written by Story by David Manson: Teleplay David Manson and Mark V. Olsen and Will Scheffer
Directed by Michael Spiller

With a lunar eclipse approaching, the Henrickson clan has been haunted by omens. Bill has a foreboding dream that he's being chased by something, as the sound of drumming fingers gets closer and closer. Don thinks the dream might be a revelation, but Bill's not so sure — his spiritual revelations usually come in quiet premonitions. He decides to fast on it in the hopes that he'll get some clarity.

The next day, a state trooper arrives at the store and hands him a letter — a legal document stating that the UEB, Juniper Creek's United Effort Brotherhood, has the right to audit his books. "I work for the Prophet," the trooper tells him with a menacing smile.

More trouble is brewing back home, as Nicki's compulsive shopping habit catches up with her. Her phone's been ringing off the hook with credit card companies threatening to send collection agencies. Even more ominous is the call she picks up from her father — he wants her to come see him.

Bill and Don pay a lunchtime visit to an empty lot they've been eyeing for their next store, and Bill tries to assure his colleague that Roman will soon move on to easier prey. Don isn't so sure, and he reminds Bill of what befell some of the prophet's previous prey: a kitchen supply company that was torched, a man in business with Juniper Creek who 'fell' out of his office window. Bill brushes off Don's concerns. "You don't know that. His wife said suicide."

They take the UEB letter to Bill's lawyer, who is shocked to see that Roman has enlisted a high-end corporate law firm. Reviewing the original contract, the attorney informs Bill that the UEB does in fact have the right to audit them, as a female assistant drums her fingernails on a side table.

When Barb gets called in to substitute teach, her day's chores and errands fall to Nicki, who passes them off to Margene, citing a family emergency. While attempting to juggle everyone's chores and four small kids, Margene has a disastrous day, ultimately resulting in a humiliation for Tancy at her lunar eclipse pageant.

Nicki arrives at her father's austere office, just in time to catch a nurse drawing a syringe from his arm. "Do you have thorough and complete check-ups?" he asks his daughter, before changing the subject to the matter at hand. He received a call from a credit card company — he had co-signed for a card with a $500 limit, but the balance has reached $6,000. He offers her a check for half, and suggests there might be a way to pay off the rest; he wants to know how her husband's new store is doing. Bill doesn't talk to her about business, Nicki insists. Roman suggests pointedly that she ask him. "If Bill were to throw you out, you know you can always come back home," he tells her.

Bill gets another surprise visit at work — this time from Joey and Wanda. Dressed in a sharp suit, Joey explains he's off to make a presentation to an old folks' home — Roman enlisted him to talk about his pro football days. He gets the old people to trust him first, Wanda blurts out, then talks them into writing big checks, investing in "worthless ranches out in the desert and it makes me sick!" Some of the old folks have started suing to get their money back, deals from before Joey came aboard. "Lawsuit's put a real scare into Roman," Joey adds, before asking if he can borrow back his Superbowl ring from Benny. The old people like to see it.

After Nicki clams up at the family dinner, Bill tries to comfort her. "You're my rock," he tells her, before gently inquiring why she didn't tell him about the Roman visit. "I don't know... he just called me," she says, before confiding that her father asked about the store. Bill becomes suspicious, but Nicki assures him she let Roman know he doesn't talk to her about business. "Bill... you're my husband. I would never do anything to hurt you," she says emphatically.

Sarah's new friend Heather wants to know how her mother was able to agree to polygamy. Sarah offers two explanations, her mother's (she started to believe in the Principle, too) and her own (she loves Sarah's father too much, and was afraid of losing him). The curiosity prompts Sarah to go searching for answers of her own, including how Nicki's father ended up controlling the compound. "Roman was your great grandfather Orville's accountant," Barb explains. "After the raids in the 50s, Orville set up the UEB, and Roman manipulated the shares. I don't really understand how, but he tricked Orville and was able to vote him out... like a hostile takeover. Roman took Orville's land and most of his wives, and left your Dad's family poor as dirt."

At work, Sarah's wild co-worker, Donna, invites her to a party up at the university. Heather wants nothing to do with the "whore" Donna or her party, but Sarah thinks it might be fun to go "boy hunting," and cancels plans with the more reserved Heather. When they get to the party, Donna quickly abandons Sarah, leaving her alone with two bottles of cough syrup to get a buzz. At the end of the night, woozy and unable to convince Donna to leave, Sarah is saved by Heather, who's stopped by to offer her a ride home. "You have to promise me something," Sarah asks Heather, curled up in the grass. "You can never tell a soul about my family." Heather promises.

Ben's been having "weird dreams" lately — the kind that make him want to wash his own sheets — and he's confused about his girlfriend. On a father-son hunting trip with the Embrys, Ben asks his dad how he'll know if God's talking to him. It's a question Bill's been wrestling with himself. "It's one of the most important challenges in life, to hear, recognize the voice of the Lord," Bill tells his son. "Staying wholesome's part of it. So many addictions in this world — TV and food and gluttony — things that are offensive and numbing to the spirit. But you also have to be very careful. Sometimes you think it's the Lord speaking, but it's just your own emotions. Your own demons."

They're interrupted by Jason Embry on his walkie talkie — his dad's gone to the car, and he just saw a wolf. "Just leave it alone and it'll leave you alone. Rule of the wild," Bill tells him.

Determined to keep Bill in the dark about her finances, Nicki calls the Suze Orman show, and ends up getting chastised by the financial guru for not coming clean to her husband about her debt problem. She finally tallies up all her bills, and as the numbers approach $60,000, she goes into a panic, locking herself in the bathroom. Hours later, when Barb and Margene finally coax her out, the three have a showdown. Still hiding her debt problems, Nicki takes her frustrations out on the "boss lady." She heard Barb was offered a steady teaching job, and she tells her she cannot take it. "You can't make decisions that effect us without consulting us first, right Margie?" Nicki rants. "We're equals." Barb calls Nicki on her less-than-equal treatment of Margene, before announcing she's taking the teaching job, "for ALL of us."

As they wind up their hunting trip, Ben stops to tie his shoe, and a rabid wolf emerges from the brush, closing in on him from behind. Ben, Bill and the Embrys freeze for a moment before Bill takes action — shooting the wolf dead. Seeing his son in danger, Bill decides to confront one of his own demons. "We're going after Roman," he says to Don. "We're gonna take it to him."