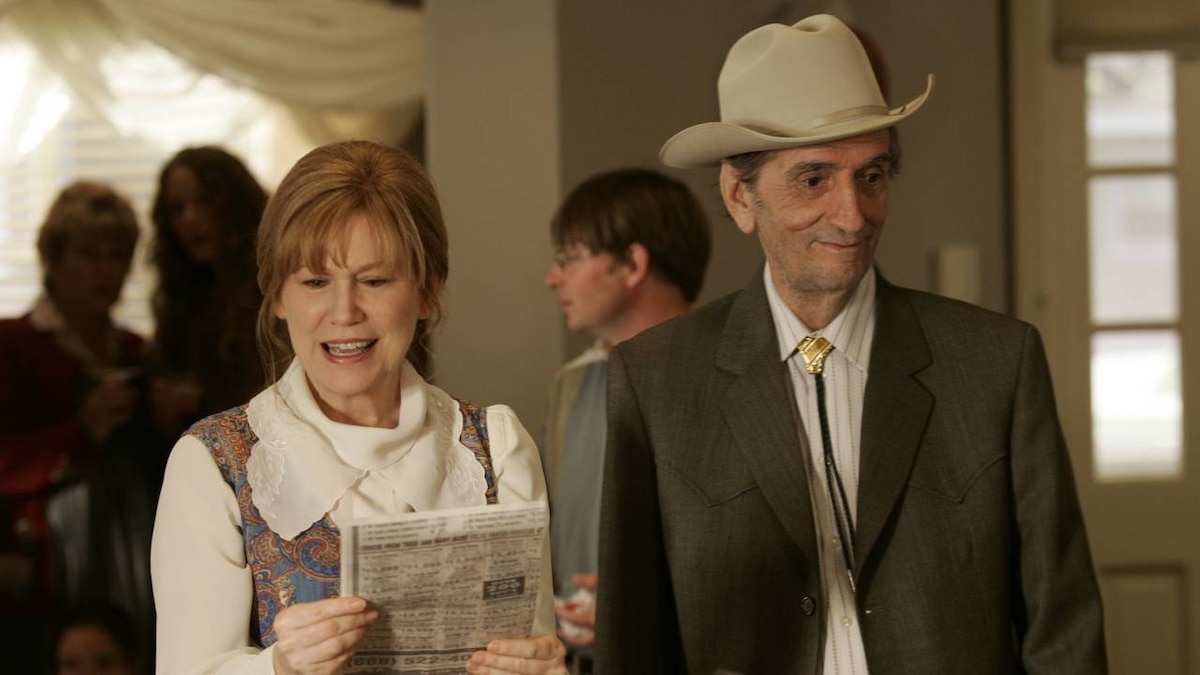 Written by Mark V. Olsen and Will Scheffer
Directed by Charles McDougall

With her son Wayne's birthday approaching, Nicki tries to plan an extravagant party at a hotel resort (just immediate family, 153 people) without informing the sister wives, or even Bill. When he finds out, she tries to assure him that her father offered to pay for it, which only makes him angrier — leaving Nicki in tears.

After complaining about being stranded, Margene finally gets her own car, and can barely contain her excitement, despite Bill's warning that "stewardship, not consumption, is the proper relationship to material wealth." To celebrate, she sneaks off with Ben for a joy ride around the neighborhood.

When the security company arrives to install a motion-sensitive Home Invasion System, the wives become alarmed, pressing Bill to tell them what it is they need to be protected from. "We have assets to protect now," he says. "I've been on TV for the store... who knows what nut cases could be out there... look what happened with that Elizabeth Smart girl."

Security at Henrickson's Home Plus is not so good, however. Bill's bookkeeper gets a threatening visit from a man with "hateful eyes," who scares her into cutting him a check for $22,000. "He made me put a notation on it, 'fifteen percent, second store,'" she explains, still rattled. As Bill acts clueless, another employee offers up the license plate number of the man's Humvee. Don Embry lets Bill know he's concerned — just involving an outside security company puts them at risk of exposure. "Look what happened to the Buick dealership, top of the world in sales 'till he was exposed, then sales dried up in six months." Bill assures Don it will all blow over. "Roman will fold. You'll see. It's a bluff... just have faith."

It appears Roman's been busy on several fronts. With son Alby as his P.R. aide, he grants an interview to the Los Angeles Times to defend the practice of polygamy. "The principle of plural marriage was God's sacred gift to us," he tells the reporter. "We alone have kept the principle alive. We are the one true church." When questioned about the violence and abuse committed against children and young girls, Roman claims it doesn't exist. "We crush it." With Alby's prompting, he offers the journalist a final talking point: "If the Supreme Court says yes to the privacy rights of homosexual persons, surely it's time to recognize our rights to live in peace, too."

New neighbors have moved in across from the Henricksons, and to preempt any curiosity they might have about their entwined families, Barb brings the wife a cake — and tells them about the single mother families living across the way.

Their curiosity is piqued regardless when a caravan of Juniper Creek visitors pull up a few days later — Nicki and Bill's family members arrive in prairie garb to celebrate Wayne's birthday at the house. Bill tries to calm his angry mother, who's still convinced he told his father she poisoned him. (Frank has taken to monitoring her house with a shotgun, forcing her to come and go through a small back window.) And when Roman arrives, Bill is finally pushed to the brink. He confronts Nicki about inviting him, and reveals the real reason for the security system. "Whatever's going on, why can't you reconcile?" Nicki asks, blind to her father's wrath. "Blessed be the peacemaker."

Roman's youngest wife, Rhonda, visits with Sarah up in her room. They used to play together when they were younger, and Rhonda wants to know why Sarah hasn't visited her in the past few years. "I couldn't," is all Sarah can say. Rhonda explains that she's in a "pre-marriage placement" with Roman, a way to get around the law until she's 16. But she wasn't forced, she insists. Roman is "sweet" to her, and, after all, "the greatest freedom we have is obedience."

Bill's brother Joey and his pregnant wife, Wanda, also make it to the party, grateful for the invitation. After congratulating Ben for making varsity baseball, Joey surprises him by pulling out his Super Bowl ring. "I always kinda wanted you to have it," Joey tells his nephew, handing the ring to Ben. Staring on in shock, Barb lets Joey know the gesture is unnecessary, as Ben embraces his uncle — thrilled about the gift.

After meeting Margene for the first time, Lois lets Bill know he's even more of a disappointment to her. "You've not only taken his side... you've become just like your father!... Plural marriage is a religious calling, not a license to coerce young girls." Bill is forced to mount his own P.R. defense, enlisting Margene to explain to Lois that it was her decision to join the family. She had been working at Home Plus, but wasn't very good at her job, so she took a job as the family's babysitter. But what she really wanted was to be a wife. "I wanted to be a member of the family."

Roman's own P.R. campaign appears to have backfired. An excited Adaleen interrupts Wayne's party to read the Los Angeles Times article. "Roman Grant, prophet and patriarch of Juniper Creek, home to the second largest polygamous sect in Utah, says, 'We're just like... homosexuals.'" As her voice trails off, the party guests are bewildered. Adaleen quickly changes the subject.

Wayne gets a pony ride in the back yard, Roman sings to the kids, and Nicki opens some of the expensive presents she's bought for him. Adaleen pulls her aside after to chastise her "vulgar materialism." "It's a complete slap in the face," she tells her daughter. "You have no idea how difficult my life is," Nicki responds, before storming out of her own party.

Just as all is falling apart inside, Bill's father arrives in his pick-up and parks outside the house, lying in wait for Lois. She finally emerges and confronts her husband. "I want you to admit that you did it," he tells her. "If I'd a tried to kill you, you'd be dead!" she fires back, before revealing the true reason behind her fury. "You shot Gumbo — you shot my dog!" Frank is incredulous. "That's the reason? That dog was all crippled up and wouldn't've made it through the winter."

Back in the house, Bill goes looking for Nicki, and finds her lying on her bed — next to her father, sharing a confidence and laughing. As if this scene weren't disturbing enough, Roman issues another warning to his son-in-law on his way out: "You have robbed me of the tithes and offerings due to me. And don't be trying to protect yourself, Son, 'cause there's no place to hide."

As the guests finally leave, the new neighbor, Carl, watches from across the way. The Henricksons are left to confront the stress of their day. "I don't fit in anywhere," Nicki confides.

Just as Bill tries to reassure her, the alarm system screeches into full alert, set off by the forgotten party pony. The family steps out into the backyard, blinded by their own floodlights.