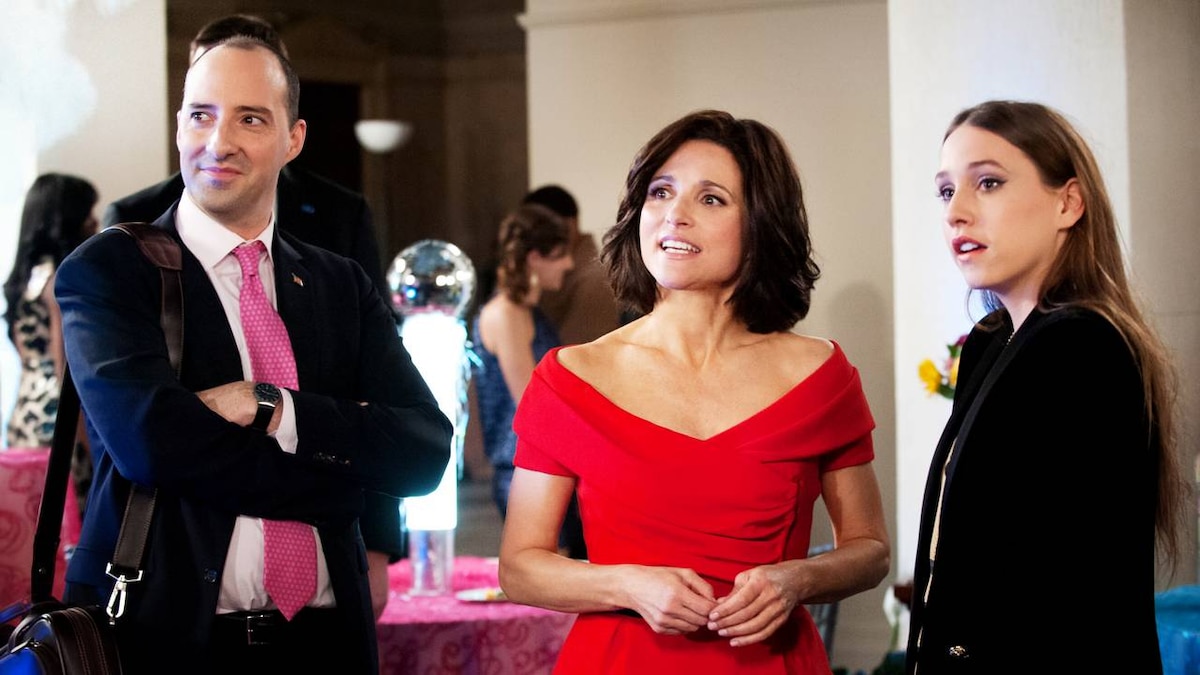 "Just because my last name rhymes with liar...How lucky am I that I'm not Selina Mapist or Selina Medophile?" - Selina

Mike arranges a press debriefing to highlight Selina's trip to Helsinki and her ongoing budget talks with the House majority leader, Mary King, to avert a government shutdown. In attendance is the "Beltway Butcher" Leon West, who demands to know whether Selina knew about the spy and lied about it, or if she lied about how involved she was with the rescue. Mike attempts to brush him off, saying, "This isn't Meyer the Liar again," accidentally giving West his headline.

"I just saw Mary King. It looked like she'd been thrown up by a whale." - Ben

Elsewhere, Selina and Mary King are deep in budget talks when the majority leader is suddenly overcome by a sneezing fit. Thinking Mary's using one of her infamous stall tactics, Selina doesn't realize right away she's having an allergy attack. Amy, Gary, and Dan rush in and out of Selina's office removing potential allergens: a mohair throw, a bowl of nuts, Gary covered in cat hair. The culprit turns out to be the flowers Dan bought for Catherine's birthday party that evening. "Oh Christ, those f******, that's it," Mary wheezes. Insisting she won't feel good for hours, Mary pushes the budget talk to the evening. Selina insists she can't miss her daughter's party, so they'll have to negotiate there.

"I'm not worried about Andy because I'm going to completely obliterate him with my f****** poise and sophistication." - Selina

Sue brings word that Selina's ex, Andrew, wants to pick up Catherine and bring her to the party, despite Selina having already arranged a car service. Everyone agrees with her that this is typical, prompting Dan to ask why everyone hates Andrew. Selina explains he "fluffs ya and then he f**** ya," like the time he bought her a Porsche for Valentine's Day - with Catherine's trust fund money. Gary and Amy worry that she's referring to him as Andy - it means she'll devolve into a giggling school girl the minute she sees him.

"I've been wrecking parties since I was thirteen - I was the Hunter S. Thompson of bar mitzvahs." - Ed

Ed Webster, a fundraiser for Selina's Boston office and Amy's date for the evening, arrives. He's excited to say hello to Selina, but she has no idea who he is. "We met in Bumf***, Idaho, I think it was?" Her cluelessness provides fuel for a jealous Dan's vitriol - Amy turned down a date proposition from him that morning.

"The Veep looks smokin' tonight. I wonder how much vodka we'd need to have a little Mrs. Robinson moment." - Jonah

Catherine's birthday is hosted at the National Gallery of Art, and it's not quite the "epic succeed" Selina thinks it is. Catherine's mild enthusiasm wanes further when she spots Mary King in attendance along with Ben, who's "plus tenned" himself number crunchers to help Selina close the budget deal.

After getting the DJ to quiet things down so she and Mary can talk (and subsequently emptying Catherine's party), Selina finally closes the budget deal. However, the following morning's papers are far more concerned with Selina's personal life: the press thinks that she and Andrew had a huge fight at the party, which is why she was absent from the cake cutting. Adding fuel to the fire is a recently published book asserting that their relationship was faked during the last election to mislead voters. "That's a lie. It's true, and it's what happened, but it's Kent's lie, not my lie."

"This is not flirting. This is as subtle as putting a nude photo on Facebook." - Catherine

Selina, Andrew, and Catherine have dinner together to make up for the budget deal party crashers from the night before. Selina and Andrew's flirting volleys between love and hate before turning openly sexual, mortifying Catherine. "I feel like you're actually going to have sex on this table, and that would truly ruin my birthday."

At a separate table, Amy watches over Selina and Andrew, who's "like a dormant volcano, and he can just blow at any second." She's joined by Ed, who is antagonized by Dan and Jonah. Ed manages to hold his own, however. "Jonah, you're not even a man...You're Frankenstein's monster, if his monster was made entirely of dead dicks."

Andrew's volcano moment comes when he romantically pulls Selina towards him to whisper a secret - his company funded Super PACS on both sides during the last election. Aware that everyone around them is watching, Selina must repress her rage. Her control only lasts so long; Amy brings word from Kent that POTUS is stalling on the budget deal - presumably to shift attention away from the spy scandal. Livid with POTUS, Selina gestures angrily at Andrew. This is photographed by a fellow diner and goes straight to Twitter. Without context, it seems to confirm that their relationship is a sham.