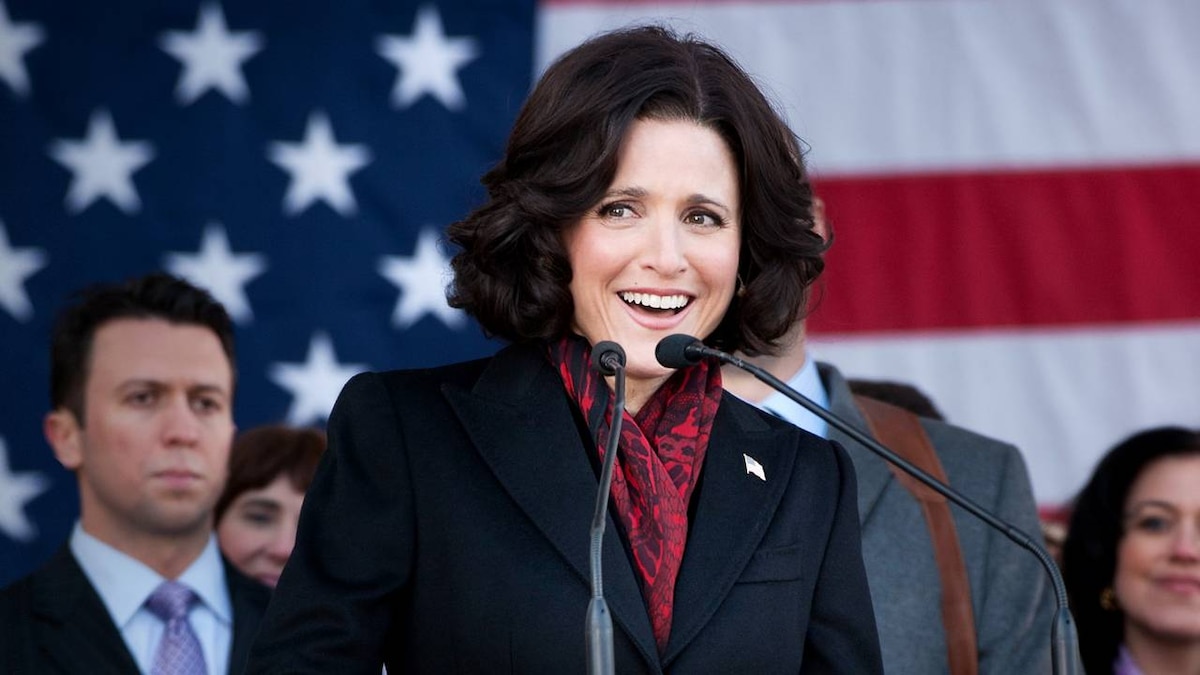 "Tonight is going to be a plane crash shoving a train wreck onto a crowded highway." - Dan

In order to confront POTUS about assuming more responsibility, Selina asks Gary for the Miami Sunburst lipstick her stylist recommended to offset the morose atmosphere in the in Oval Office. "Come 2 a.m., my eyes will say 'holocaust' but my lips will say 'carnival.'"

Mike gives a statement to the press, informing them Selina will not be doing the morning news shows. A reporter asks him if she's deserting a sinking ship -- a crack at the leaky boat he's trying to sell on eBay that's draining him financially.

Selina finds Ben, the Chief of Staff, hiding in a supply closet fearing for his job. She asks for advice on how to assume more of a leadership role in the White House and he directs her to senior strategist Kent Davison, the Pol Pot of pie charts, who forced her to fake a happy relationship with her ex-husband during the election. "He made us go river rafting together. Catherine got giardia!"

"You know what they call guys like you in prison? Sweet meat." - Roger Furlong

Furlong calls Dan to threaten him with jail time if he loses the gubernatorial bid and return to his chairmanship on the Congressional Oversight Committee. He blames Selina for his poor performance and wants to launch an investigation on her office for revenge. "You're gonna have to prepare to be gay for the stay because you're going down." However, the threat of prison doesn't last long: Jonah announces they've lost the House later that night -- meaning Furlong's no longer Chairman and doesn't have the power to send Dan to jail.

"If you're not at the table, you're probably on the menu. And I will not be eaten." - Selina

Selina goes to Kent and attempts to persuade him to "reposition" her to a role with more power. Lacking any respect for Selina's job, Kent's refuses to help her. He's crunched the numbers and they taste pretty bland to him. Worried about Kent's attitude, Selina tells her staff she's concerned he'll try to get between her and POTUS like a thick rubber condom. She needs their help getting "unprotected access to the Oval Office."

"I can feel my virginity growing back in here." - Dan

Selina and Dan stumble upon Jonah's stat-nerds who tell them Selina's campaign visits always lead to a bump for the candidate -- even trumping POTUS. With this new information, Selina heads to the Oval Office believing Kent's there with the President. But when she arrives, she finds only Kent, who's spread a rumor that POTUS is awake and leading so people don't think he's given up.

The stat-nerd arrives with Dan at the Oval Office to deliver Selina's campaign data -- it turns out her lead over POTUS is a meager 0.9%. Dan and Kent discuss the value of the statistic, angering Selina who refuses to let Kent use her as a prop again. An argument ensues and a panicked Gary, who's been unable to find the Miami Sunburst lipstick, intervenes with a substitute that Selina accidentally smacks into Kent's eye.  In the ensuing chaos, the lipstick is trod into the Presidential seal on the Oval Office carpet.

"I need that stuff that junkies use, you know, when it takes a cop like fifteen bullets to put him down." - Selina

Exhausted and feeling defeated, Selina returns to her office to find that the President has actually called. Ben tells her POTUS acknowledged her 0.9% and is giving her an enhanced role in foreign policy -- she's got a sit down with a Senate committee in two hours about a hostage situation in Uzbekistan. Kent also stops by -- POTUS wants her to do the morning news shows in the wake of the disastrous Midterms: "You will be the face of our failure." Despite being "exhaustipated," Kent's got her booked for 27 interviews.

Overly done-up and delirious, Selina settles in front of the camera and complains to Mike: "I'm about to enter a national ass-kicking contest with no legs and a massive ass."