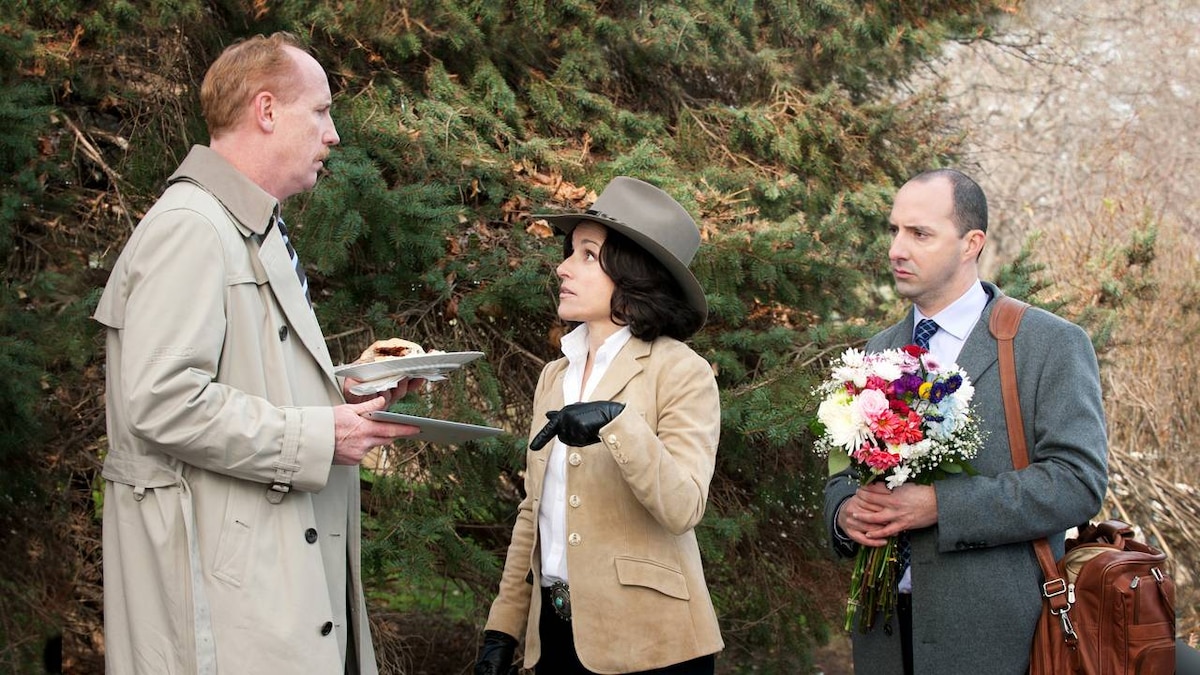 "They want me to go to a pig roast, to meet a bunch of men who probably took turns to f*** the pig before they roasted it?" - Selina

Empowered by the premise of a bigger role in the White House, Selina confronts Kent about his decision not to intervene in the Uzbekistan hostage situation. Ever a slave to the polls, he insists on inaction until the numbers support it. He leaves Jonah to inform Selina she'll be unable to attend the National Security meeting he promised her. POTUS wants her on the ground at a North Carolina pig-pickin' as part of their new Listen to Rural America Program, "U.S. Hey!" Selina insists she'll be at the security meeting, even if she has "to get Sue to fly around the world the wrong way like Superman and reverse time."

En route to the hog roast, Gary informs Selina their world just ended: Somebody wiki-leaked their secret signals to a tabloid, and now Gary has to brainstorm a new exit strategy so Selina doesn't get "stuck talking pig s*** with people who use hay as furniture." Gary suggests rubbing her eyebrow, but Selina worries people will think she has crabs.

"It's your daughter. She's fine, but she's done something that will make you want to kill her." - Mike

Mike learns that an essay Catherine wrote for a film class leaked to the blogosphere. It praises the "masterly portrayal of brutal Israeli aggression" in Emad Burnat's "Five Broken Cameras" about nonviolent Palestinian resistance to Israeli settlement of the West Bank. Back in DC, Amy and Dan scramble to get out "the Gettysburg Address of tightrope-walking say-nothing bull****."

"If this were the sixties, we could just have the National Guard shoot the daughter." - Kent Davison

Kent, concerned about the combination of family strife and the Middle East, orders Jonah to get Catherine to apologize. Selina gets her daughter on FaceTime and tries to sweet talk her into apologizing, but the conversation sours when she spots Rahim, Catherine's Iranian boyfriend, in the background. Catherine accuses her of having a problem with his nationality and then hangs up, refusing to apologize for the essay. Selina orders Mike to get on a chopper and bring Catherine back to the air base, along with some towels: she may need to "daughterboard" her.

Later, Kent sees Selina on TV voicing solidarity with the Jewish people in front of rotating pork. He calls on Mike to "de-pork the visual," but since he's at the air base with Catherine, he's forced to call on Jonah for assistance. Jonah works "security detail" by bending over and blocking the pig behind her.

"You're about as annoying as a condom filled with fire ants." - Furlong

Roger Furlong's in town trying to make nice for a possible Senate run and has spent the day trying to get a hold of Selina. Denied at every turn, his patience is worn thin by the time he approaches Sue. When she denies him an appointment, he flies into a rage, threatening to release dirt he has on Selina. "I've got boxes and boxes on Selina Meyer, you understand me? I've got Pandora's f****** boxes on her!

Meanwhile, Selina is unsuccessfully trying to escape the feared pig s*** conversation by frantically rubbing her eyebrows. Gary, unaware they were using the signal, doesn't catch it in time. When Selina reprimands him and insists they're using the signal, he proudly reveals his girlfriend Dana thought of it. With horror, it dawns on him that she was the source of the leak.

"When would I have time to see a film? I haven't even been able to see that wonderful movie with the blue people in it." - Selina

At the air base, Selina argues with Catherine about apologizing for the essay. She tells her it could cost her the pro-Israel contingency and subsequently Florida's 29 electoral votes in two years, and then "mommy's out of a job." Cathefrine agrees to apologize if Selina lets her spend part of Thanksgiving break with Rahim.

While Selina grills Rahim about his family and career goals, Gary interrupts with an actual call from General Mercer. He wants to know if she'll be back for the meeting or if they should start without her. To Kent's chagrin, Selina arranges to video conference with them from the plane. Disappointments continue aboard Air Force Two as Mike, after talking to Rahim about his crushing student loans, reflects on his own depressing financial reality. Gary, depressed about the signal leak, learns he's failed Selina even further after she removes her cowboy hat to reveal Bozo-esque hat hair - she'll look ridiculous for the security meeting. 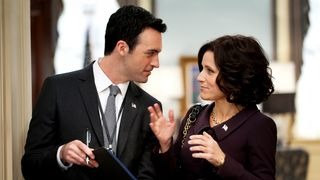 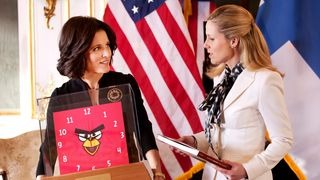 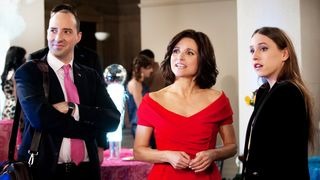 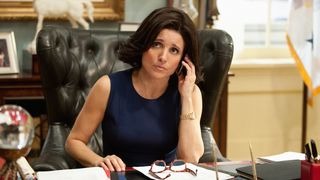 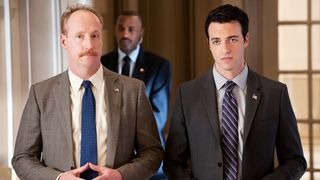