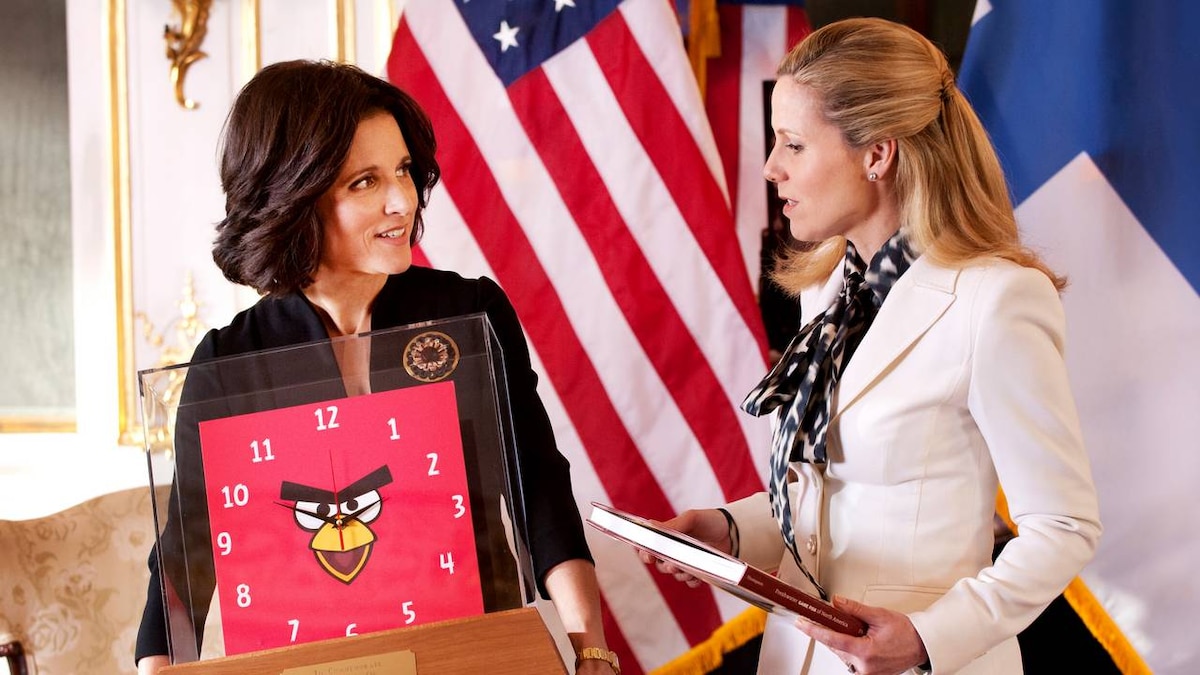 "Yeah she's going to apologize to Europe...because it's right up there with the bubonic plague and the carpet bombing at Dresden." - Dan

On Air Force Two en route to Helsinki, Amy does damage control for Selina's "50 Ways" song, while Dan struggles in his role as the new Mike: "I don't want to be like Mike. Even Mike doesn't want to be like Mike." Selina covertly implores Gary to get her cigarettes. He protests, but she insists "I need my flaming red heads." Besides, she only smokes internationally.

"It's like a math prison; they rape you with numbers." - Mike

While Mike flounders on Kent's Dream Metrics team, Dan calls him for advice: "How do you do that Fozzie Bear, happy guy, wakka wakka bullshit to get the press to like you?" After revealing how to "McClintalk," Mike calls on Jonah for help with Dream Metric, promising to get him back in as the "Veep's resident creep" in return.

"Selina, are you looking for fifty ways to leave Helsinki?" - British reporter

After landing in Helsinki, Dan unsuccessfully tries his hand at being Mike with the waiting reporters. Selina notes the cold and hostile reception - "Are you sure we didn't overshoot and land in Russia in the 1950s?" Later, she meets Minna, the Finnish Prime Minister. She presents Minna with a book - "Freshwater Game Fish of North America" - based on information from her team that the Prime Minister enjoyed fishing. Selina receives an equally awkward gift - a cumbersome clock with an ‘Angry Bird' on its face.

Kent asks Mike to divert the media's attention away from the White House and towards Selina's Helsinki visit - but refuses to explain why. Exasperated, Ben exits from his hiding place in a nearby supply closet and reveals one of the Uzbekistan hostages was a spy - and the president knew it. Unfortunately, other people, like Selina didn't know, and she even went on record denying it.

"I'm the Vice President of the United States of America. He just squeezed my tit like a balloon." - Selina

Selina attends the Prime Minister's drinks reception. When Minna leaves to speak with the Finance Secretary, Selina joins Minna's husband Osmo outside for a smoke. Mid-conversation, Osmo reaches over and grabs one of her breasts. Shocked, she goes back inside and reveals to Gary what happened. While he gets her water, Amy arrives, and believing Gary knows about the spy situation, accidentally reveals the news to Selina.

"People think POTUS lied about that kid being a spy. I want to know what you two spunk junkies propose we do about it." - Furlong

Ben argues with Kent about what to do vis-à-vis the spy lie - he wants Kent to get the president to admit he knew about the spy, but Kent wants to do more polling before determining the right course of action. Furlong busts in and confronts them - "You two have been caught with your balls in grandma's mouth - everybody's talking about it up on the Hill." He's followed shortly after by an equally incensed Senator Doyle: "This isn't just a crisis...this is at least ten years of Oliver Stone movies."

Later, Selina and her team have dinner with Osmo and Minna. She introduces Gary who explains that he's the Veep's bag man, or "kassi" in Finnish. Osmo reveals that ‘kassi' is a slang term, meaning "man bag" - Gary's been introducing himself as a "testicle container."

Back at Dream Metric, Jonah tells Mike to use "command A" rather than "control A" to add regional summaries from Kent's thumb drive. Jonah realizes his mistake too late - Mike's sent Kent's polling consultation to half the politicos in DC. In a panic and trying to reconcile what they've done ("This is the Internet age - nothing stays a secret"), the pair bump into Kent, Ben, Furlong, and Doyle just as the disastrous email pops up on their phones.

"Would it be so hard for people not to be assholes?" - Selina

While Selina gives closing remarks, Amy gets word that Kent's polling data leaked - they need to get on the plane before Selina can answer any questions from the press. Selina explains that Osmo will face consequences for the grope. "In America we kill people for looking at us funny; we waterboard folks who haven't even done anything."

As she's leaving, a tenacious reporter demands to know if the President knew about the spy. Without thinking Selina responds, "I stand with the President" and immediately regrets it. Back aboard Air Force Two, everyone agrees Finland sucks. "I told everybody that I was a scrotum," Gary laments.