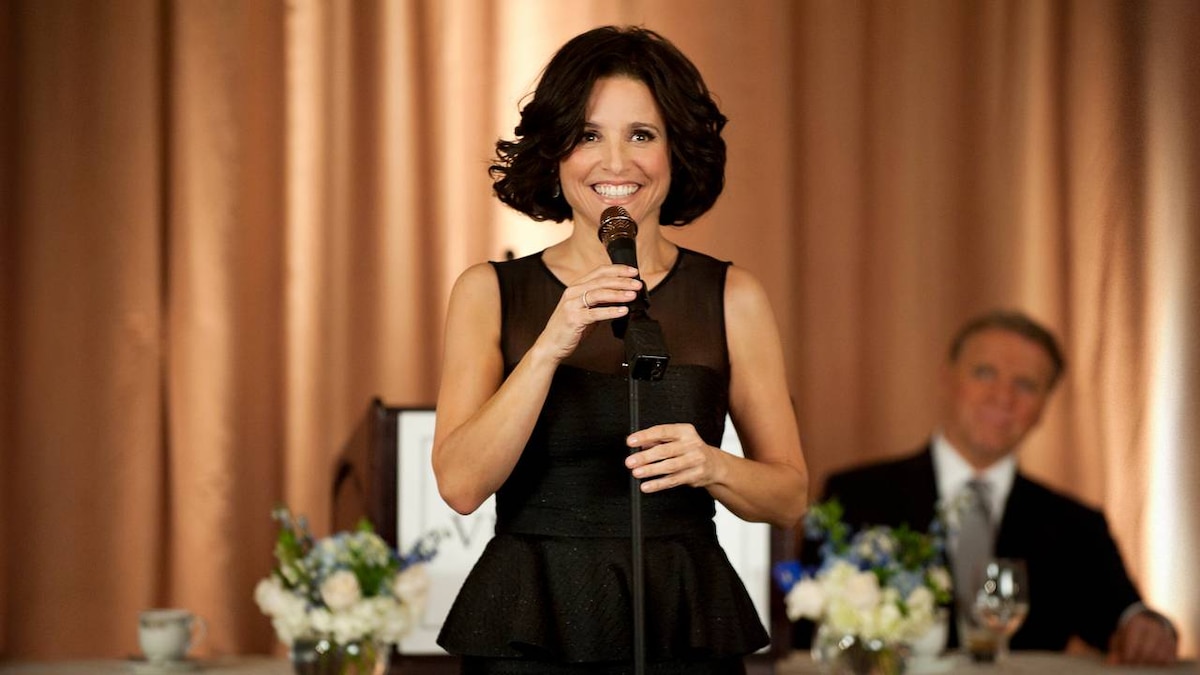 "You look concerned but steely - like a lady soldier." - Gary

Gary, Amy and Selina review photos of the hostage rescue Situation Room. Among them are terrible photos, showing Ben with his large coffee thermos as well as the President looking particularly jowly.

Dan attempts to get an invitation to join Kent's new demographic study team, Dream Metric, but Kent snubs his offer to share strategy ideas. Mike, however, piques Kent's interest when he makes a sailing quip - he has a catamaran himself: "I have no children, and I wish for none, but she's my family." Dan sees an opportunity to schmooze his way into Kent's good graces and mentions a time he went power boating on Lake Erie - which only disgusts Kent further.

Selina arrives at the office to find everyone in the midst of damage control. The White House released a photo other than the good one she selected. In the new photo, Selina is shown looking distractedly down her nose at her phone. "It looks like I'm tweeting when a guy loses his leg!"

Knowing Kent's behind the photo fiasco and purposely trying to make her look bad, Selina storms into a meeting and demands an explanation. The switch, Kent insists, was because the other photos caught POTUS at unflattering angles, vis a vis jowls. Selina can't believe her ears: "That's how he looks! That's his face!" Kent refuses to alleviate the situation, however, and Selina throws her hands up and returns to work on her song about the new Speaker for the Vic Allen dinner that night, but Kent's got her there, too. He reminds her that they're in the midst of budget talks and reaching across the aisle, so POTUS doesn't want the Speaker mocked.

Jonah brings word that Selina's a meme. There are Photoshopped versions of the bad Situation Room photo, putting a distracted Selina at various historical events. Among them: Selina at the signing of the Declaration of Independence, with Mary Magdalene at the crucifixion, at the 2004 tsunami, and the moon landing.

Selina tasks "Rogers and Hammershit," (Mike and Dan) with writing a new song. Amy suggests that they write a song making fun of Kent, instead. "Make fun of ourselves, that's what he said." Selina agrees.

"You've been following me like Nancy Drew and his butt-sniffing dog, and I'm the one with nothing to do?" - Jonah

Mike, with the reluctant help of Dan, gets to work on "50 Ways to Win in Denver" - a parody of "50 Ways to Leave Your Lover." They're distracted after seeing Jonah walk by and decide to follow him to see what he does all day. When they confront him hiding in a supply closet, they discover he does nothing except try to look busy. Jonah's forced to admit that Kent's freezing him out, to Mike and Dan's delight. "You're obsolete. You're like an old VCR, but with a bigger mouth!"

Amy confronts Selina about unrest amongst the staff: Dan's bored, Sue's job hunting, and even Gary is unhappy - he feels that Selina's been picking on him since he started dating Dana. The news about Gary comes as a surprise: "He'd be happy if I shot him in the face. He would be. I've actually thought about it." Ever the problem solver, Selina learns that Sue is looking for more money so she buys her off. Amy suggests she invite Gary to dinner to show her appreciation.

At the Vic Allen dinner, Selina discusses the "joke truce" with the Speaker, who winds up breaking his promise not to joke about the photo anyway. Danny Chung and Selina have a strained conversation over who's more likely to be the next president based on their appeal to young voters, and attempts to prove his hipness with a beat-boxing performance. Selina holds her own, performing "50 Ways to Win in Denver" to an enthusiastic crowd. The only one who doesn't love it is Kent: "Keep smiling Mr. Ryan. I'm smiling falsely. So should you."

The next morning, Kent gets revenge by asking to borrow Mike to help launch Dream Metric. In exchange for Mike, Kent will let her go to Europe in POTUS's stead for the signing of the Helsinki agreement. He also unloads Jonah on her, who promises to handle all new media and get her "major traction" on Reddit and Tumblr.

Later, aboard Air Force Two, Selina and the team deal with the backlash from European leaders who are pissed about the anti-European lyfrics she sings in a video of her "50 Ways" performance. Dan explains the video somehow made it to Reddit and Tumblr and exploded from there. Recognizing those words, Selina turns an icy stare on Jonah and orders him to "get the f*** off her plane."